A new bomb attack hits this NATO capital, but all is not as it seems - Canary 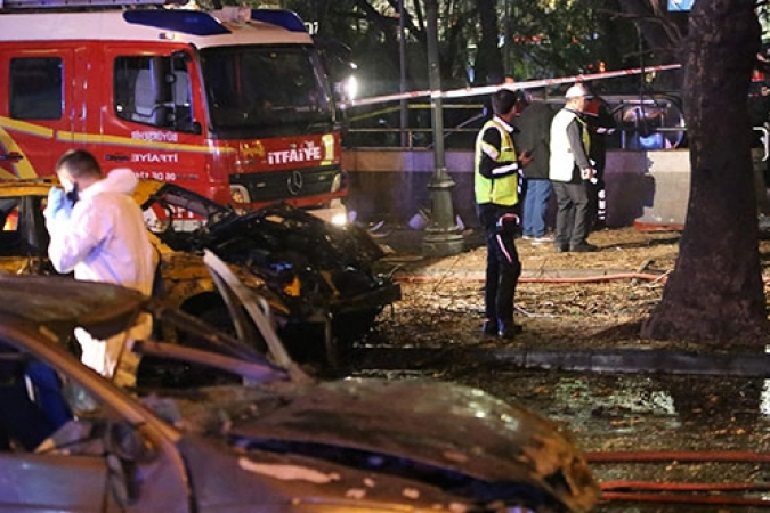 Turkey has the second biggest army in NATO, and has used it to launch a vicious offensive against Kurdish citizens over the last eight months. But NATO, the EU, and the western media have largely failed to condemn the Turkish regime for its crimes.

Because of this silence, the recent bombings in Ankara and Istanbul may have come as a shock to many. But the reality is that violence is the norm in Turkey today, and that most of it is perpetrated by the state itself.

The Huffington Post has spoken of how Turkey “increasingly looks like war-torn Syria”, and The Canary has recently provided a shocking glimpse into one Kurdish town destroyed by Turkish authorities. Columbia University’s David L. Phillips, meanwhile, has insisted that:

Under the guise of fighting terrorism, several hundred Kurdish civilians have been killed [by Turkish forces] since July 2015.

One big problem is that President Recep Tayyip Erdoğan has built what Sputnik News calls a “monopoly of lies”. And by cracking down on the independent media at home, Erdoğan’s regime also appears to be determining the line taken by the western media. Papers like the Guardian, for example, have simply glossed over the fact that Erdoğan was the main culprit behind the current conflict in Turkey, having erratically broken off promising peace negotiations with the left-wing Kurdistan Workers’ Party (PKK) in July 2015.

The 13 March bombing in Ankara

On 13 March 2016, security sources confirmed that a riot police control point in the Turkish capital had been the target of a suicide bombing. Many of the 37 people killed were apparently members of the police force, but civilians also died in the attack. The Erdoğan government soon took control of media reporting of the incident by refusing to specify whether the victims had been police officers or civilians – forcing outlets to refer very ambiguously to ‘people’. Note here that his regime has always referred to the 400 or so civilians killed in Kurdish communities as ‘terrorists’ – never as ‘people’.

At the same time, Erdoğan immediately blamed the bombing on the PKK – which is known for targeting only military targets in an attempt to avoid civilian casualties (unlike the regime itself). By doing so, the president sought to justify his ongoing assault on majority Kurdish communities in the south-east of Turkey.

But on 17 March, a different group took credit for the attack. The Kurdistan Freedom Falcons (TAK) claimed the bombing was retaliation for the state’s anti-Kurdish war, and that it had targeted Ankara because it was “where decisions to massacre Kurdish people are made”. Nonetheless, it expressed “sadness” that some civilians had died in the attack. The TAK had previously attacked a military convoy in Ankara in February, killing 28 people. It had also hit the international airport in Istanbul in December 2015, killing one civilian.

On 19 March, a suicide bombing took place in Istanbul, killing five people. The Turkish government originally blamed the TAK for the attack, but the attacker was soon suspected to be associated with Daesh (ISIS/ISIL). The PKK condemned this attack, saying:

From whoever it may come, we must stand against actions targeting civilians.

The TAK is not the PKK, but Erdoğan wants us to think it is

The first public operation of the TAK in 2005, which hit a tourist destination, was immediately denounced by the PKK. The TAK website explains that its members had once fought with the PKK, before deciding the latter’s methods of struggle were “too feeble”.

Unlike the PKK, which is a popular mass movement, little is known about the small and “extremely secretive” TAK. What is clear, however, is that they are separate organisations. Former PKK members, for example, have insisted that “the TAK exists on its own” and is not under the command of the PKK.

The TAK itself also claims to be “totally independent”, and Al-Monitor stresses that “the PKK claims none of TAK’s actions”. Even though attacks in cities in western Turkey attract more international attention to the war going on in Turkey, the outlet insists, the PKK refuses to target these places. Why? Because it doesn’t wish to “squander the positive international reputation it is gaining for its struggle against the Islamic State” by being responsible for civilian casualties.

But although it was the TAK and not the PKK which carried out this month’s Ankara bombing, Erdoğan is not waging war on the TAK alone. He’s waging war on the entire Kurdish community, as he has been doing for the last eight months. And this is precisely why he’s seeking to equate the two – to justify his indiscriminate anti-Kurdish war.

The mainstream media has failed to question Turkish propaganda

After the Ankara bombing, a wide range of media outlets referred to “Kurdish militants” or “militant Kurds” being responsible for the attack. Conveniently for the Turkish regime, such accounts blurred the line between the TAK and the PKK for western readers.

The western media also failed to place the attack into the context of Turkey’s war on Kurdish communities. We had to rely on Selahattin Demirtaş, a prominent parliamentary opponent of Erdoğan’s AKP, to question the government’s role in the bombing, saying:

There have been 3 explosions in 5 months in the country’s capital. What can we do, congratulate the AKP for this? … Isn’t the government responsible politically for what happens in this country? … they closed their doors to calls made by the opposition for collective work and partnerships… Blood is flowing in every corner of the country. But these gentlemen have no desire to account for events.

Independent security analyst Metin Gürcan was one of the voices of reason in the aftermath, insisting:

This is not violence initiated by the PKK

Ankara was not the same as Paris

On Facebook, Ankara resident James Taylor compared the attack to the Daesh attack on Paris in November 2015, insisting that Ankara was just a normal city and definitely “not a war zone”.

British media outlets soon jumped on this bandwagon. The Independent’s Allan Hennessy, for example, criticised “Euro-centric mourning” – which focused on Paris but not Ankara. But he himself failed to mention the hundreds of Kurdish civilians killed by Turkish armed forces in the previous months. And he also said very flippantly “as the PKK takes credit for Sunday’s attacks” – an outright lie which both misled the paper’s readers and fed into Erdoğan’s propaganda.

The Guardian’s Liz Cookman, meanwhile, insisted “there are no tanks on the streets of Ankara” – aiming to portray Turkey as a place of peace and tranquillity. But she totally ignored the fact that Turkish tanks have been roaming numerous Kurdish towns, terrorising their people and destroying their homes.

Whatever the media says, Turkey most definitely is at war today. And worse, with its own people. As Selahattin Demirtaş has said this month:

We are supposedly a candidate country for the European Union but it is impossible to tell that from the tanks that are firing inside our cities and round-the-clock curfews lasting weeks at a time.

In short, this month’s attack in Ankara was not a one off. It has been the norm in Turkey for many months. And the TAK has only contributed to a very small part of this. The main terrorist force has been the current Turkish regime itself.