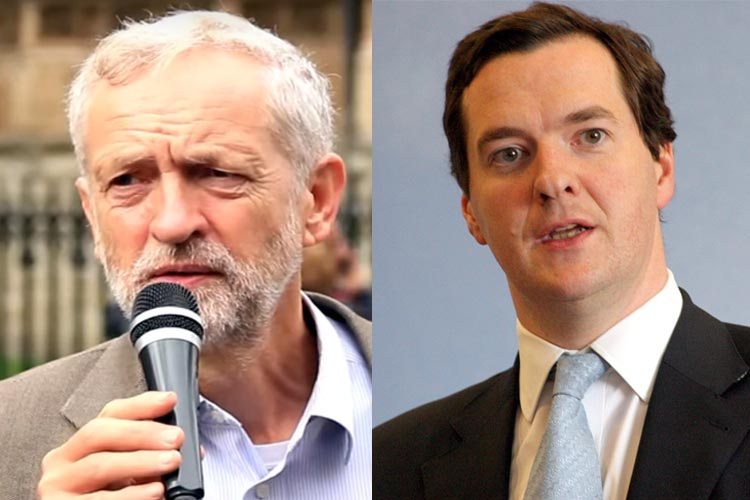 Labour leader Jeremy Corbyn has added his voice to the chorus of those calling for the resignation of the Chancellor George Osborne. This follows Iain Duncan Smith’s explosive U-turn on the government’s disability cuts and his accompanying resignation from the Cabinet. In an interview with Sky News, Corbyn was damning of the Chancellor’s record on the economy, his honesty with the public, and the recent budget.

The budget requires that a number of votes be taken on it, and there are very serious doubts as to whether it will get through the Commons in its current form. Shadow Chancellor John Mcdonnell says that the budget needs to ripped apart and drawn up from scratch. He points out that there are gaping holes in the budget, with over £4 billion in cuts not accounted for.

But George Osborne is also facing a barrage of criticism from within his own party. In the wake of Iain Duncan Smith’s resignation one Tory MP unflatteringly compared Osborne to the Child Catcher character from the children’s film Chitty Chitty Bang Bang, saying:

Osborne’s dead in the water even without the budget. George is like the Child Catcher. The IDS resignation just cements the idea in the public’s minds that George is unpopular, unfriendly and has not done a very good job.

This mood was echoed on Radio 4’s Today Programme where John Humphrys repeatedly grilled the Chancellor on his failure to meet his own targets. Humphrys rammed the point home, saying:

I suppose what I’m asking is… What’s a bloke got to do in your job to get the sack?

The wrong person has resigned. If George Osborne had been as good a chancellor as IDS has been at the [work and pensions department] we wouldn’t have a deficit now.

The Chancellor’s hopes of becoming Prime Minister are now widely believed to be dead in the water, with another senior Tory saying:

George is clearly unfit for the job.

The resignation letter couldn’t be more pointed. It is saying he is literally not fit to wear the mantle.

It’s a rare moment when so many voices are in agreement. On the left and on the right of the political spectrum, within the halls of Westminster and outside it, there is a realisation that the Chancellor’s entire stewardship of the economy has failed.

But this furore is also part of a split in the Conservative party. The usual obedience to Cameron is starting to crumble. Recently he has been told to ‘stop acting like a dictator’. The prospect of a British exit from the EU has been a flashpoint for the chaos, but so too was the cabinet’s defeat on cuts to Tax Credits – a move as unpopular among Tory backbenchers and the House of Lords as it was among the public.

As has been pointed out many times before, George Osborne is not qualified to run the economy. With an bachelor’s degree in Modern History rather than economics, it is doubtful whether he would have snagged the position of Chancellor of the Exchequer in the first place, if it were not for the fact that he was in the same class at school as David Cameron. It is time for Osborne to go.

-Will Osborne jump, or does he need a push? Demand Cameron dumps the Chancellor.

-Write, blog, or just voice your opinion in the pub. Spread the word, he’s got to go.

-Grab the attention of your local MP by writing to them.