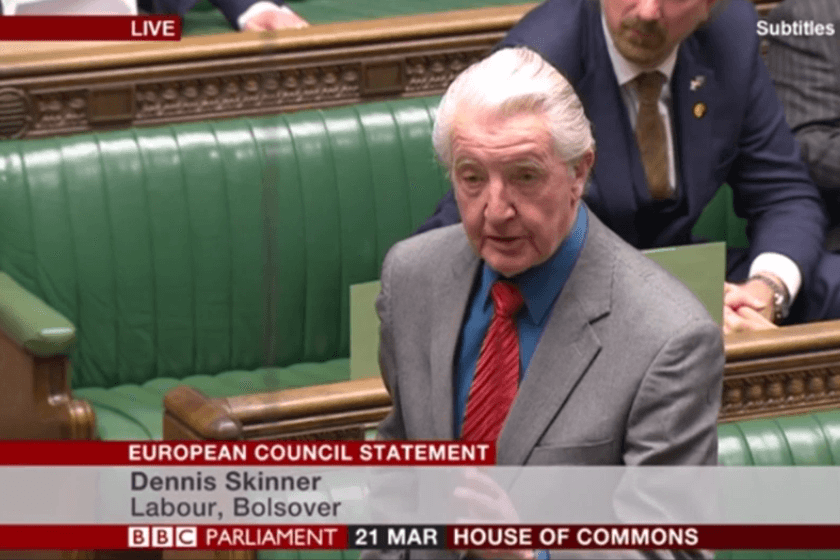 The legendary MP Dennis Skinner just demolished George Osborne in parliament with one of his classic quips. The 84-year-old Labour MP is well known for his biting one-liners, and he let nobody down with his latest.

He ended on the haymaker:

It’s 8 budgets for Osborne already, only cats have 9 lives.

Even David Cameron laughed. And thanks to Cameron, Skinner is still going strong in parliament. When asked why he hasn’t thrown in the towel, Skinner said:

Mainly because Cameron told me to retire.

The staggering rise in UK public debt since Osborne became Chancellor substantiates Skinner’s blow. Osborne has piled on more debt than every Labour government combined. He has also missed two out of three of his own deficit targets, and is on course to miss the third.

The only thing really up for debate is which budget has been the worst. This may well have been back in 2012, when Osborne robbed pensioners to offer an income tax cut for Britain’s 330,000 richest families.

But whatever the worst has been, Skinner has accompanied him with numerous critiques along the way.

Here’s Skinner calling Osborne out on his alleged cocaine habit, to a relatively full House of Commons:

Skinner refused to withdraw his statement.

And his comments on the bedroom tax really bring the policy into perspective:

Skinner has been fighting the little guy’s corner in parliament since he was elected in 1970. At 84 years old, he is still going strong and is one of the most respected MPs in the House. At this rate, he’ll still be batting away Tories when he hits triple figures.

– Subscribe to The Canary to help liberate the media.