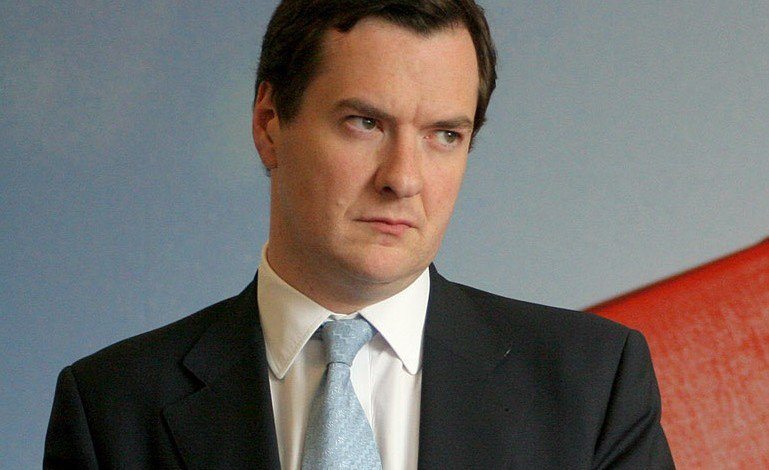 Shadow Chancellor John McDonnell accused George Osborne of being unfit for high office on Tuesday, and called on the Chancellor to resign. Dramatic new polling shows that the majority of the public agrees with McDonnell. Are we looking at the beginning of the end for austerity?

On Tuesday, George Osborne finally had to face the House of Commons and answer questions about his controversial budget. Instead of showing contrition, Osborne swaggered his way through the performance. He refused to apologise for trying to balance the books by cutting support to disabled people while giving tax breaks to the rich, and he refused to explain how he plans to fill the £4.4 billion ‘black hole’ opened up by his U-turn on the cuts.

In response, John McDonnell accused the Chancellor of being unfit for leading office and called on him to resign.

Several recent polls suggest that mainstream opinion in Britain now agrees with McDonnell’s assessment of our Chancellor. A YouGov poll released on Tuesday shows that George Osborne’s approval ratings have gone into freefall, reaching their lowest level since the ‘omni-shambles budget‘ of 2012: 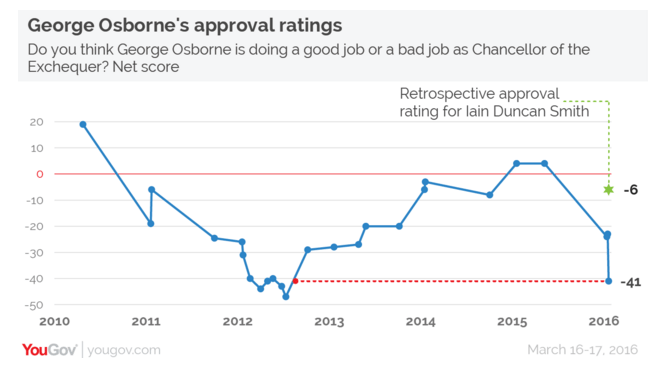 The poll also delivered a blow to Osborne’s leadership ambitions, showing that just 8% of British people now think he would be up to the job: 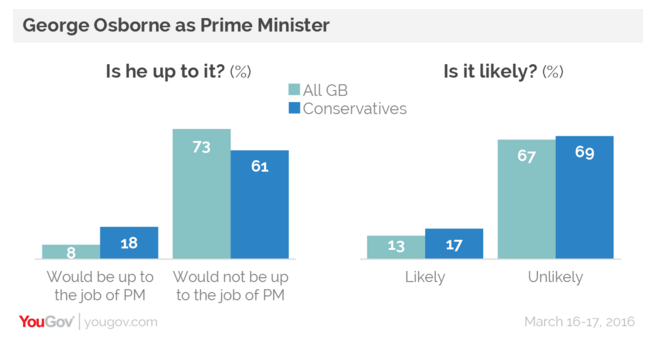 Meanwhile, a Sky snap poll of 1140 interviewees on Monday suggests that the majority of British people think Osborne should be sacked: 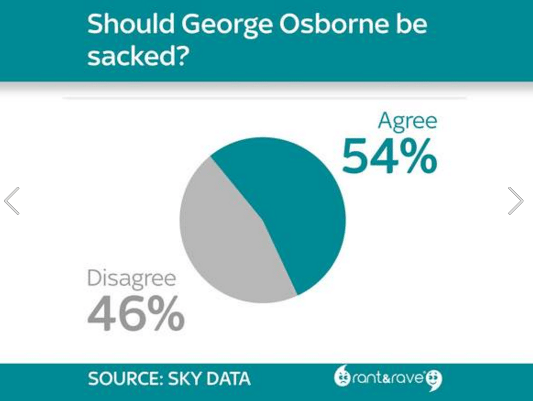 The polls follow a torrid week for Osborne. He has been lambasted by the public and by bastions of the right wing mainstream media, including The Sunday Times. His carefully crafted message that we’re ‘all in it together’ has been blown out of the water by Iain Duncan Smith, who explicitly pointed out that the government targets its cuts at society’s less well off “because they don’t vote for us”. He has been forced to do a U-turn on his planned cuts to Personal Independence Payments. And the Office for National Statistics has said he is on the brink of missing his own deficit reduction targets for the current financial year – again.

It would be enough to set anyone back in the polls. But there is good evidence to suggest that Osborne’s failing fortunes are not just about one catastrophic budget. There is, it seems, a growing disillusionment with the Conservative party overall. 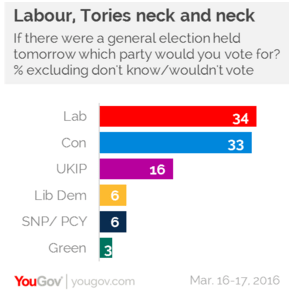 A separate YouGov poll, conducted on March 16 and 17, put Labour slightly ahead of the Conservatives for the first time since Jeremy Corbyn became Labour party Leader. This followed an ICM poll a few days earlier (before the budget), which put the Conservative party and Labour neck and neck. That poll prompted ICM to question its own findings – but now it seems there is something afoot in public sentiment.

So what exactly is happening?

Yet another YouGov poll, released on the morning of the budget, gives us a clue. That poll shows that the number of people who think the government’s spending cuts are fair is plummeting. More strikingly still, fewer people think they are good for the economy, and fewer people than ever think they are necessary: 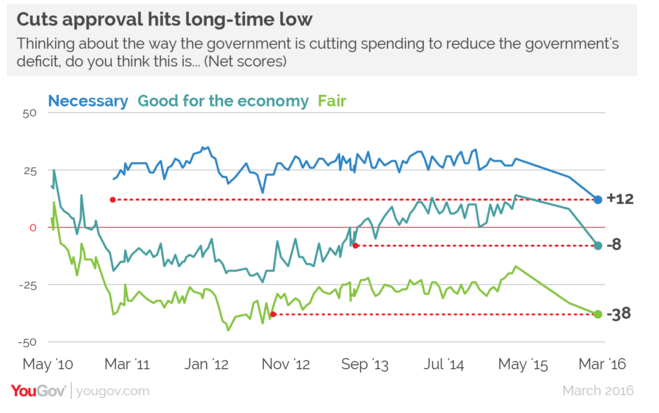 The very messages that Osborne has pinned his own, and his party’s, political survival on have begun to unravel. The argument, made by Corbyn’s Labour party, the Green party, the SNP and Plaid Cymru – that austerity is a political choice and not an economic necessity – is gaining traction with huge swathes of the population. Couple that with the finding that British people are now keener on socialism than they are on capitalism, and the signs suggest that a profound political shift is taking place in Britain. And judging by his reaction to the outcry over his catastrophic budget, it’s a shift that George Osborne doesn’t understand at all.

– Support Disabled People Against the Cuts, find out about their events and actions or donate and support their work.

– Find a local group and get involved in your area