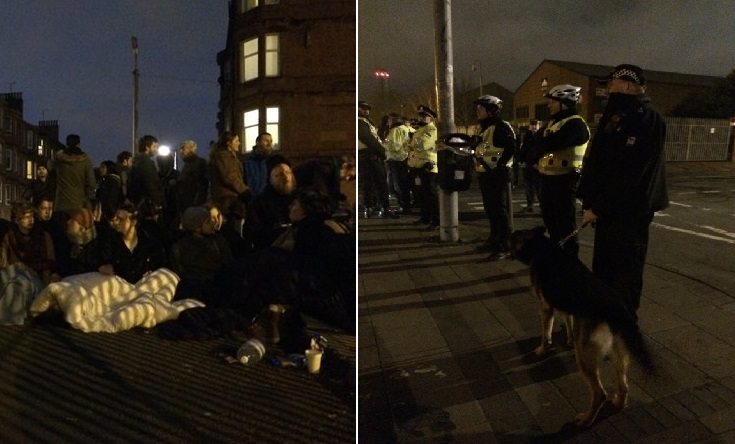 LGBT activists blockaded a Home Office building in Glasgow over the deportation of a lesbian asylum seeker from Namibia who “fears for her life”.

Police took single mum-of-one Beverley Vaanda Kanjii and her son into custody after a Home Office raid on her home in Bridgeton, Glasgow Monday morning.

They were taken to the Home Office Enforcement Team’s offices on Brand Street and face deportation from a detention centre in Crawley later this week.

The 45-year-old and her son, 14, arrived in the UK from Namibia in 2013 after seeking asylum because she feared for her safety due to her sexuality.

She claims to have suffered physical and verbal abuse in her home country – where LBGT laws are notoriously lacking – as well as having to endure a forced marriage.

But now the Home Office has rejected Vaanda Kanjii’s asylum application after deciding her sexuality would not put her in danger in her home country. We have contacted the Home Office for comment.

However, protesters feel that if Vaanda Kanjii were to return to Namibia her life would be in danger.

More than 50 activists from LGBT Unity stormed the building in a bid to prevent the bus carrying Vaanda Kanjii and her son from leaving the premises.

Some 30 officers and five riot vans attended the scene to disperse the crowd.

In the ensuing melee, an ambulance carrying Vaanda Kanjii, who was reportedly injured in the raid, and her son, managed to drive out of the premises.

Jen Stout, a journalist for The Common Space, live tweeted updates from the scene.

A spokesperson from LGBT Unity said:

You can tell by the number of people that have shown up outside the Home Office how heavily involved she is both within the group and the community.

She will be missed if she is deported.

If she is taken back to Namibia, because people already knew about her sexuality when she fled, she is in a very vulnerable situation. Her life will be in danger.

Vaanda Kanjii was undergoing the appeals process which required her to provide more evidence to support her asylum claim before her arrest.

According to a Facebook post from Positive Action in Housing, the pair were due to be flown to London today prior to deportation on Thursday.

Vaanda Kanjii has become an influential figure in her local area due to her work with LGBT Unity, a group that highlights both the presence and plight of LGBT refugees and asylum seekers in Glasgow.

Vaanda Kanjii is due to be deported on the same day as NUS Scotland’s Asylum and Refugee Officer, Lord Elias Mensah Apetsi, who was also recently arrested and detained in Brand Street.

MP for Glasgow Central Alison Thewliss has urged the Home Office to reverse their decision to deport Apetsi.

It is wrong that his life can be turned upside down, that he can be separated from his children, and taken for removal.

I urge the Home Office to reverse their decision and return Lord immediately to his family and friends in Glasgow.

Both will be held in Cedars Detention Centre, situated in Crawley, before deportation.

It has drawn fire from critics who cite its 24-hour security and 2.5m perimeter fence as unnecessary and barbaric.

LGBT Unity are concerned that taking Vaandi Kanjii to England is a calculated move designed to deny her proper legal representation.

Her lawyer will not be able to represent her if she’s in England, and we believe this is another tactic of the Home Office because they do it all the time.

The practice of dawn raids for deportation purposes was brought to the public’s attention in 2005 by the Glasgow Girls activist group.

Despite a cross-party consensus that dawn raids should be ended, they have continued to this day.

Reporting from Joseph Viney and featured image via Jen Stout/Twitter