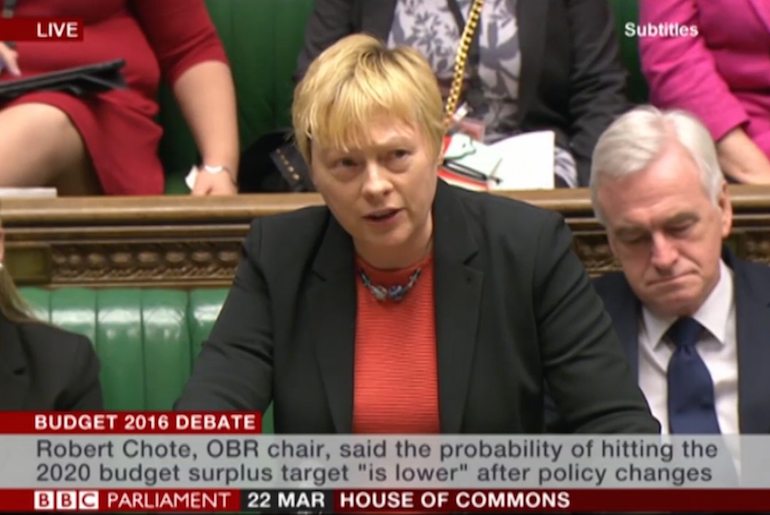 Angela Eagle slammed George Osborne’s budget, his competence and his entire economic record in a blistering 10-minute attack on Tuesday.

Speaking to the House of Commons at the end of a long day of budget debates, the Shadow Secretary for Business, Innovation and Skills said Osborne had delivered a “catastrophic” budget “which planned to eliminate the deficit on the backs of the poor and some of the most vulnerable in our society”. The result, she said, was:

an economic failure, a moral failure and a political failure.

Eagle kicked off her speech by questioning Osborne’s motivations, given his “long-cherished ambition to become leader of the Tory Party” and accused him of cutting capital gains taxes at the same time as cutting disability benefits so he could “curry favour with his own side”.

But Osborne’s strategy has backfired:

Today we see a Chancellor at bay, on the run from attacks in his own party, and he’s completely lost control of his own budget. … Today we see the utter collapse of his authority. His popularity has halved since the election. And two thirds of people who voted Conservative last May don’t think he’s up to the job of being Prime Minister.

Eagle moved on to highlight the latest economic forecasts from the Office for Budget Responsibility, which accompanied the budget:

These downgrades were “caused mainly by the Chancellor’s own failures at home,” said Eagle, before attacking Osborne’s economic competence since he became Chancellor:

This is a Chancellor who has an astonishing record of missing his own targets. He promised to protect our triple A credit rating. He has failed. He said he would eliminate the deficit by 2015. He has failed. In his 2012 Budget he set out a target to double UK exports to £1 trillion by 2020. He has failed, admitting he will miss it by £357 billion.

Claims of ‘compassionate conservatism’ were hollow nonsense, said Eagle. Since 2010:

Over 1 million people have been forced to go to foodbanks and over 1 milllion benefit claimants have been sanctioned – often for utterly trivial reasons. Dying people have been found fit to work, one woman in a coma was found fit to work. People have committed suicide. Homelessness has soared, the bedroom tax has caused untold misery. And the Chancellor has talked about workers and shirkers stigmatising all benefit claimants including those with disabilities. This has led to a discernible increase in hate crimes against them.

Angela Eagle has captured the mood of a nation that is increasingly sick of the way the vulnerable are being asked to bear the brunt of Osborne’s unnecessary and politically-motivated austerity programme. Osborne might do well to heed the change in mood, instead of gawping and giggling at Gove’s phone when he is called on to apologise for his incompetent budget.

– Support Disabled People Against the Cuts, find out about their events and actions or donate and support their work.
– Join the Health, Homes and Jobs march against austerity on 16th April.
– Find a local group and get involved in your area.