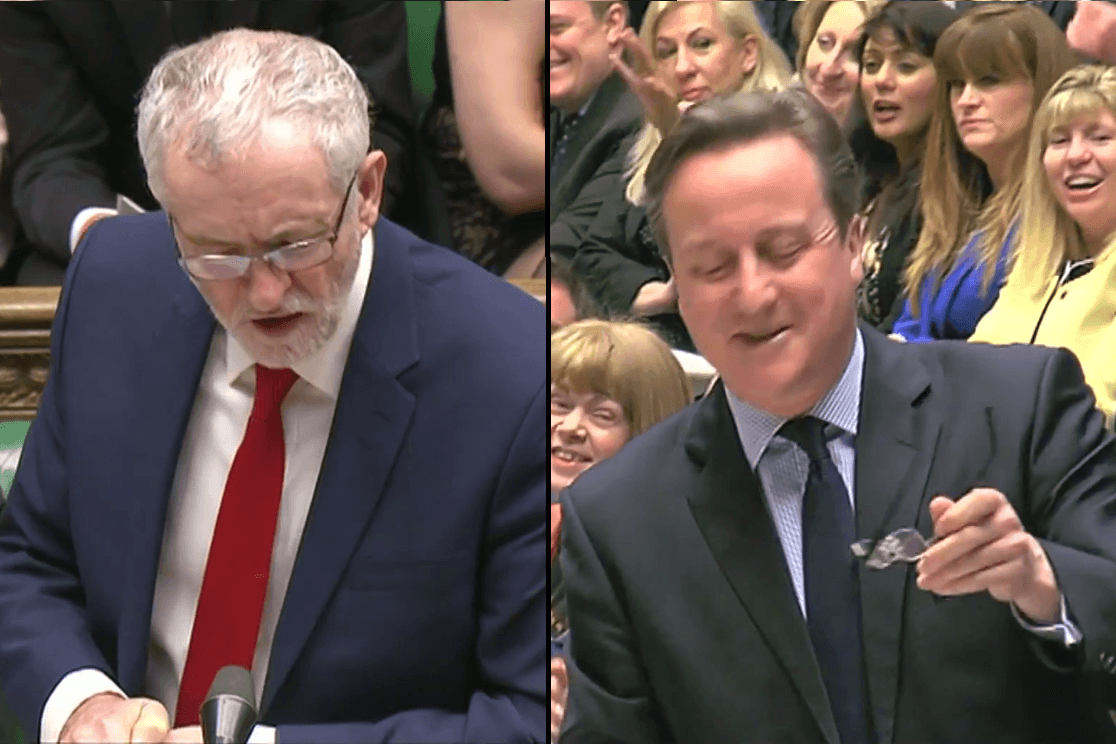 David Cameron got confused at Prime Minister’s Questions (PMQs) and accidentally confirmed his own former Work and Pensions Secretary Iain Duncan Smith’s condemnation of the Conservative party. Jeremy Corbyn had quoted IDS in a question to the Prime Minister:

Mr Speaker if it’s all so fine and dandy, then the question has to be asked: why did the member for Chingford feel it necessary to resign as Work and Pensions secretary, complaining that the cuts being announced were to fit arbitrary fiscal targets? He said they were distinctly political, rather than in the national economic interest. In the initial announcements he proposed cuts in Personal Independence Payments (PIPs), then changed his mind. Isn’t the member for Chingford right that this was a political decision, rather than one made by the interests of the people in this country?

Cameron then responded to this question with a distinctly political attack on Labour, mocking a leaked document about the parliamentary Labour party’s support for Corbyn. He also displayed a complete disregard for the concerns of the British people, saying:

I’ve got all day, Mr Speaker.

The Prime Minister may have all day, despite needing to make drastic changes to his budget because of a blunder that terrified disabled citizens. Perhaps other people do not have “all day”.

Even back in 2015, before the two-pronged assault that is the £30-a-week cut to disabled citizen’s Employment and Support Allowance (ESA) combined with the expected cut to PIPs, this disabled woman contemplated suicide because she was afraid cuts to her support would rob her of her job.

This is a microcosm; it represents how breathtakingly counterproductive cuts are in a single instance. PIP is part of a foundation upon which disabled citizens can build their lives. This allows them to be economically active citizens; because they need suitable clothes, transport and carers to get jobs or start their own businesses, depending on their disability. Yet the Conservatives argue that these cuts somehow get disabled people back to work.

During PMQs, the government also censored a BBC broadcast of a protest occurring outside the central lobby of the chamber. This was a protest against the cuts to support for disabled people.

Making the gesture for ‘cut’ across her throat, a parliamentary steward addressed the camera operator and said:

Sorry you’re going to have to stop… you can’t film with this going on in the background.

The government are cutting support for disabled people with one hand, while cutting democracy with the other. This draconian media censorship is at odds with British values, like that of a free press, which is essential to a meaningful democracy. It adds to the culture of disregard for national interest that we are seeing from the Conservative party.

The callous and incompetent cutting of PIPs was official government policy, which elicited a scrambling cover up by the Education Secretary Nicky Morgan on Question Time, as she made a dubious attempt to rebrand them as “suggestions”. Both George Osborne and David Cameron have now failed to apologise for what they admit is a mistake. Even though this mistake was made in the context of a further complete disregard of the advice from the experts – a coalition of 60 disability charities who have condemned cuts to ESA.

Cameron went well off-piste with his answer to the question about IDS’ criticisms. He simply ridiculed Jeremy Corbyn over a leaked party document that categorised Labour MPs according to their supposed level of support for Corbyn:

An assortment of MPs have since condemned the list, saying they want to focus on opposing the Tories. This attack has no link whatsoever to Corbyn’s question. The central part of PMQs – the ‘questions’ themselves – is held in contempt when Cameron refuses to answer. He is evading accountability and insulting the people who have genuine concerns.

Cameron argued that the fiscal charter – that requires a budget surplus by 2019-20 – is necessary, in contradiction to his former Work and Pensions Secretary and the former austerity champion, IDS. Deficit reduction targets like this were denounced as “self-imposed” by a central figure in Cameron’s administration – IDS.

IDS’s EU related motive for his condemnation may have been confirmed by a source very close to IDS – Ros Altmann, a minister in his own Department of Work and Pensions. But IDS has a mandate of evidence to condemn these targets. Austerity has only piled on national debt, with the Conservatives borrowing more than every Labour government combined. Because of austerity, Osborne has missed two out of three of his own arbitrary targets already.

At PMQs on Wednesday, Cameron confirmed an attack made by IDS, a Conservative who was central to his administration. He responded with a deeply political attack on Labour, rather than addressing the concerns of the British people. The government also arbitrarily censored the media, to suit their own agenda of cruel cuts. These instances add to the culture of disregard for the British values of free speech and democracy we are seeing from the Tories. From the attack on Labour’s funding, to their gerrymandering of the electoral boundaries. This culture proves IDS’ criticism that the Conservative leadership is acting against national interest.

Here’s the video of what happened when Corbyn asked about IDS’ statements: