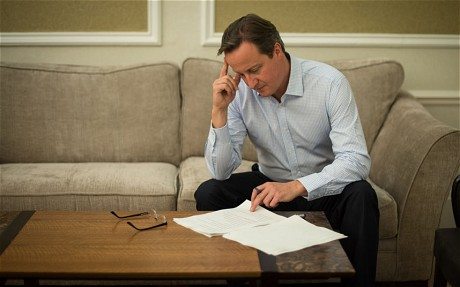 This post is satirical, and based on the original piece by Vinni Forno. An edited version is republished here with permission.

Thank you for your letter this evening.

We are all very proud of the welfare cuts which this government has delivered over the last six years, and the reduction in support from those most vulnerable, in which you have played an important part.

As a government, we have done a huge amount to force the great unwashed into work, reduce disability, and promote social injustice. There are now more people in underpaid work than ever before in our country’s history, with 1.5 million people now on zero hours contracts. We couldn’t have done it without you Iain.

I regret that you have chosen to step down from our regime at this moment. It’s been a hell of a ride.

Together, we designed the Personal Independence Payment to remove the crutch from the most vulnerable people in Britain. They could barely afford to heat their houses or eat properly before this cut, but we’re confident that removing their transport and carers will finally force them to get on and participate in British life. And if all else fails, there’s always that decision we made to cut housing benefit for sheltered housing. The mentally and physically disabled should not be able to hide from austerity in the comfort of their state-subsidised homes! The critics might want to focus on the thousands of vulnerable people forced into homelessness, but I always thought you a man of vision Iain. A man who could look past that sort of short term pain to the longer term gain, for us.

That is why we collectively agreed – you, No 10 and the Treasury – proposals which you and your department then announced a week ago. I find it a little ironic that the Gengiz Khan of my cabinet is now coming over all compassionate. Did Boris get to you? Because I tell you now Iain, the man is a bonafide b*stard. He’s on his third affair and a lovechild to boot. If he can’t remain loyal to his own wife, what loyalty do you think he can really offer you?

In the light of this, I am puzzled and disappointed that you have chosen to resign. Would you mind ATOS checking whether you are right in the head?

Let me be clear Iain, your very public attack of conscience has put us right in the sh*tter.

Today we agreed not to proceed with the policies in their current form and instead to work together to spin the hell out of them until we’re satisfied the UK public has calmed down and swallowed them.

I’d like to say that you leave the government with my thanks and best wishes. But that would be codswallop. You are a hoofw*nking bunglec*nt of the highest order and if I so much as smell you within 10 feet of my office I’ll swing for you, you wretched little w*nkpuffin.

Don’t think I haven’t figured out that this is all because we are now on opposite sides in the vital debate about the future of Britain’s relations with Europe.

Despite your little protest, the government will, of course, continue with its policy of welfare cuts, matched by our commitment to social injustice, to reducing the life chances of the most disadvantaged people in our country, and to ensuring that the wealthy who most need help and protection continue to receive it.

I hope you’re pleased with yourself.

P.S. Tell Betsy that her roast potatoes were as dry as bullets.

Featured Image via The Telegraph