In the biggest test of 2016 so far, Cameron has failed miserably (IMAGES) - Canary 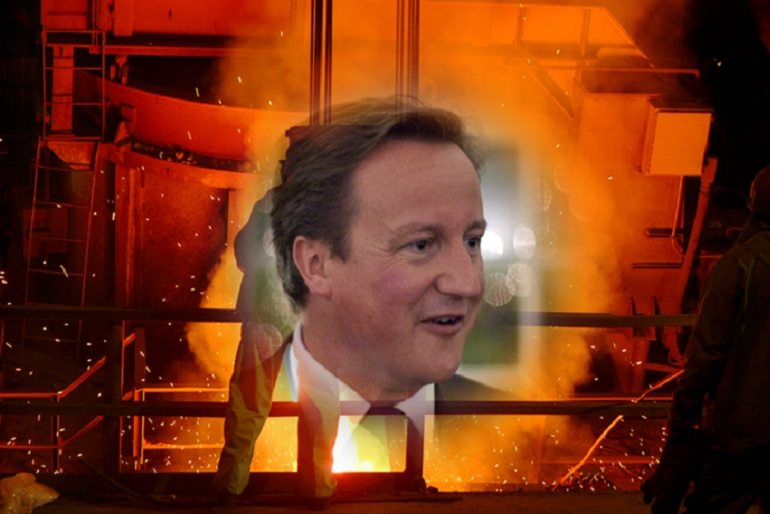 This week, the jobs of 40,000 people have been put at risk as Tata Steel has decided to sell off its UK plants. David Cameron’s government has failed miserably to deal with the crisis. This has seen British citizens and opposition politicians take on the task of defending steel workers.

The key figures in the Conservative government were all on holiday when the steel crisis boiled over, and they reacted so slowly it was painful. David Cameron organised a meeting on 31 March, but apparently achieved nothing. And only on 1 April did reports come in of Business Secretary Sajid Javid meeting steel workers.

The Prime Minister said on 31 March:

with others in Europe we’ve made sure that there are proper penalties for those that dump cheap steel on the market… we are doing everything we can.

But was Cameron telling the truth here? Did the government really do everything it could?

As Novara Media’s Leighton Evans explains, Cameron and Co. actually vetoed EU action on the dumping of cheap Chinese steel in Europe. And Chancellor George Osborne, he reminds us, has “actively touted HS2 to Chinese steel interests”. He even suggests the current steel crisis may be:

a favour returned for China devouring UK government debt in the wake of the 2008 bailouts.

The truth is that the government had opportunities to support the steel industry before the crisis hit. But not only did it miss them, it even sabotaged them on occasion. With the EU vote mentioned above, Britain actually led attempts to stop the EU commission from scrapping a rule limiting tariffs on imports to 13%. (Note here that China has just announced that British steel from Port Talbot will now have to pay an import duty of 46%.)

In fact, even The Telegraph has criticised the government, running on 30 March with the headline:

Labour leader Jeremy Corbyn immediately led efforts to save Britain’s steel industry. He met steelworkers straight away and, by 31 March, 100,000 people had signed a petition he had created a day before calling for the government to recall parliament and take urgent action to save the steel industry. 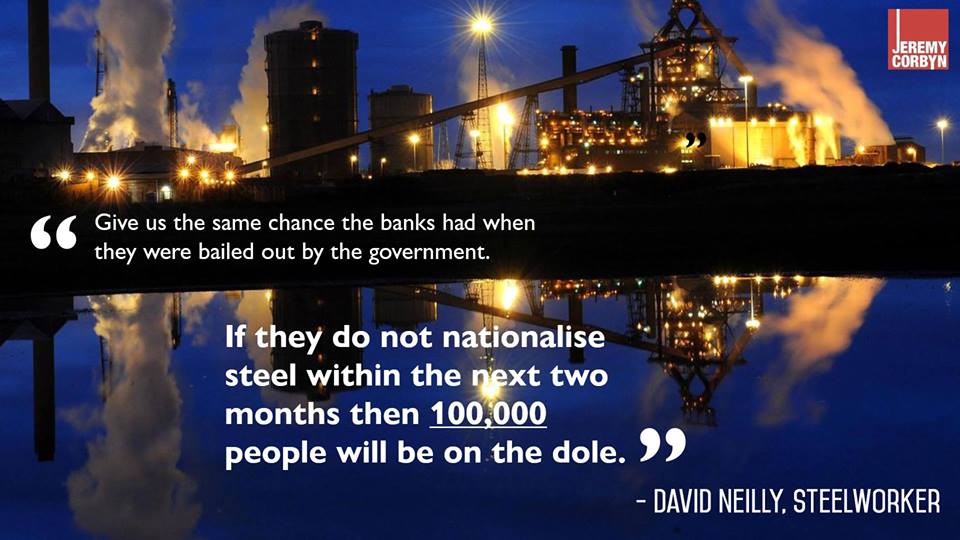 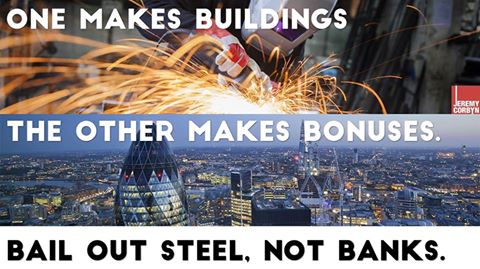 And on 1 April, the Labour leader himself announced the launch of a “national advertising campaign highlighting David Cameron’s failed leadership on steel”. In one of the first images shared on his Facebook page, he accused the Conservative government of selling out steel workers: 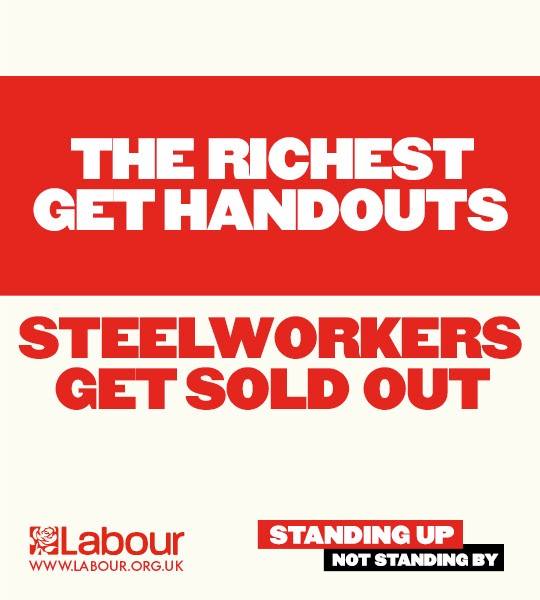 Corbyn has been praised widely for his leadership on the steel crisis. The New Statesman’s Liam Young even went as far as calling him:

one of history’s great opposition leaders

Cameron slammed across the board

But it was not just Corbyn who stood by steel workers. Plaid Cymru leader Leanne Wood, for example, criticised both Welsh Labour and the UK government on 1 April for being “asleep at the wheel”, saying:

The Labour First Minister’s decision not to be in Mumbai for the crisis talks last week signalled an abdication of responsibility and is as bad as the lack of action on the part of the Tories in Westminster.

There is an option for temporary nationalisation, but the Welsh government simply cannot do this – we have neither the resources or the power, but the UK government has… if they were willing to bailout the banks, there are strong moral and economic arguments to offer the same kind of support for our steel industry.

Britain’s steel industry has been in trouble for a long time now.  Yet the government appears to have been asleep on the job.

The Conservative Government have continually failed to take action and missed many opportunities to help the UK steel industry, such as taking steps to prevent dumping of cheap Chinese steel on the UK market.

The British public is behind the steel workers

On 1 April, a YouGov poll revealed that 62% of the British population supported the nationalisation of Port Talbot Steelworks. This figure even included 56% of Conservative voters. Only 17% of those polled were against such action.

In other words, this is not just a political issue for those opposed to the current government. It is a fundamental issue about the British economy and about British workers. With even its own supporters backing nationalisation of the steel industry, the Conservative government would be utterly foolish not to do so.