Why aren't genetically engineered animals making it to our plate? - The Canary 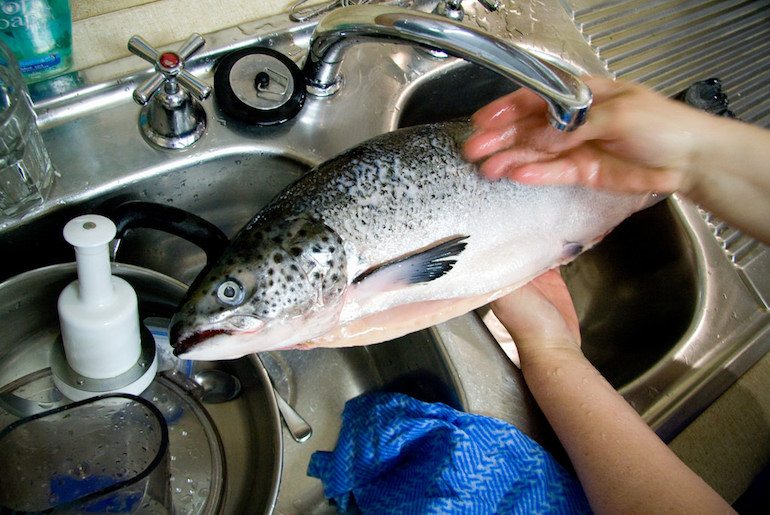 Although genetically engineered (GE) plants have become accepted as viable food sources, there is only one GE animal, a type of salmon, that has so far been approved for human consumption. Why are the regulations for animal products so much stricter?

Genetic engineering is a targeted and powerful method for inserting DNA into an organism to introduce new, desirable traits to that organism. Rice has been made to grow in drought conditions. Corn has been made resistant to pests. It’s even been possible to create glow-in-the-dark sheep (although we won’t be eating them).

So far, there is no convincing evidence to say that any existing genetically modified food is unsafe. In fact, GM foods now comprise a large portion of global food.

Up to 80% of processed foods in the US are now genetically modified.

So why aren’t there more approved GE animal products?

A recent opinion piece published in PNAS explores this question and suggests that the differences can be linked to conflicting regulatory processes when it comes to GE plants versus GE animals.

The authors of the paper, from UC Davis, propose that all GE foods, whether animal or plant-based, should be going through the same regulatory processes.

All GE foods, whether animal or plant-based, should be going through the same regulatory processes.

Food Safety shouldn’t be an issue for GE animals

Biologists have been tinkering around with DNA for a few decades, and GE animals have been around since 1985. Yet GE salmon wasn’t approved until 20 years after this time, which was an astonishing 10 years after it was first filed for approval. Over this same time period many GE plants were approved and, since 1993, some have even been allowed to be commercialized (deregulated).

Although there are obvious differences between plants and animals, none of these differences impact food safety. In fact, there are far more similarities between the two food groups than there are disparities.

Food is, of course, a necessity. We all eat, and animal products are a major food group for the majority of people. We want and need food that is safe, nutritious, sustainable, and is raised ethically. And we’ve been let down in the past – think Salmonella outbreaks and CJD scares. We know that regulators have to consider acceptability as well as scientific evidence.

But, as the authors point out, these are issues whether an animal has been genetically engineered or not.

Another concern to be considered is the potential spread of GE animals into wild populations. In fact, the recently approved GE salmon is currently facing major backlash amid fears that the salmon could escape into wild populations, despite precautions being in place to prevent this from happening.

This is an important issue, which needs to be addressed, but it is not exclusively a GE animal issue. The same concerns affect GE plants, too.

So what’s going on? Why are GE animals being held back?

These questions were recently echoed in the House of Commons Science and Technology Committee report on the misuse of the ‘precautionary principle’ in EU policymaking.

The precautionary principle affects the introduction of new products or processes – it states that if a new product or process has disputed or unknown ultimate effects, or if there is no scientific consensus on an issue, it should be resisted.

Not surprisingly, the precautionary principle has been used in making GE food regulatory decisions.

The Science and Technology Committee is suggesting that the principle is hampering scientific efforts in genetic engineering. Former Committee chair Andrew Miller states:

[genetic] technology potentially offers an array of benefits, but concerns are being expressed that it is being held back by misuse of the precautionary principle

In this inquiry we will be looking at whether such restrictions are hampering UK scientific competitiveness and whether they are still appropriate in light of the available evidence on the safety [of genetically modified foods].

Where to draw the line?

The line between ‘safe’ and ‘unsafe’ seems to be hazy when it comes to the regulatory process and GE animals. But there probably shouldn’t be a line at all, argue the authors of the PNAS paper.

On one hand, as the authors state, the consumption of DNA falls under “generally recognized as safe” (GRAS). For example, our ancestors ate aurochs, which are genetically different from the domestic cattle of today. If we selectively bred a new type of cattle, changing the DNA sequence of the cattle generation by generation, the new breed would also be considered safe despite having a different DNA sequence. The same goes for plants.

GRAS also recognizes that no two food items, even if they are the same type of food, are ever chemically the same. It is only possible to define normal ranges for a particular food, based on the amount of nutrients it should contain, or the presence of toxic compounds for example. Again, this affects both animal and plant foods.

It makes sense that the concept of ‘generally recognized as safe’ should be applied to the regulation of GE animals.

On the other hand, the current trigger for regulation of GE animals is the introduction of DNA, no matter the application, or whether the DNA or product of the DNA will be consumed or not. Essentially, GE animals are being treated differently by regulators than GE plants, despite the same technology being used in their production.

The authors report that it is inconsistent to consider DNA as GRAS, yet regulate transgene DNA (as found in GE organisms) as potentially hazardous. GE plants contain just as much transgenic DNA as a GE animal. So why the extra caution when it comes to GE animals?

Risks should be scientifically defined

The problem, suggest the authors, is that “regulating based on the current process, in the absence of any scientifically defined risks, is not useful and dilutes the scrutiny required for truly novel GE products designed for use as food.”

Right now, it seems we have neither assurance that our food is safe and wholesome, nor science supporting our regulatory decisions. Is it time our regulatory processes had an overhaul?