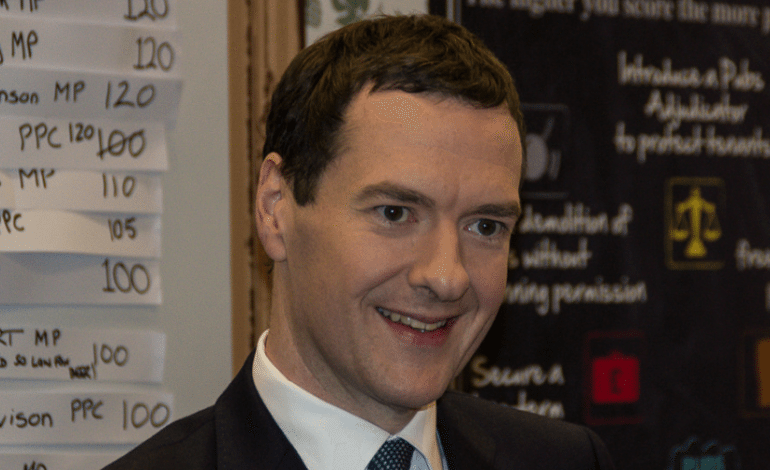 The Panama Tax scandal has put Prime Minister David Cameron under pressure to answer questions about how much he benefited personally from the tax avoidance of the Cameron family business. While we await the results of further investigation, we already know that the Chancellor George Osborne has definitely enjoyed just such benefits.

Channel 4 News investigated the tax dealings of the Chancellor in 2015, and made an astounding discovery:

Chancellor George Osborne’s family business made £6 million in a property deal with a developer based in a tax haven, a Channel 4 News investigation has found.

Wallpaper firm Osborne & Little teamed up with a secretive corporation in the British Virgin Islands, to draw up plans to redevelop its former London headquarters into housing.

The companies jointly applied for planning permission for around 45 flats and houses, and once given the go-ahead, Osborne and Little sold its site to the offshore firm for £6,088,000.

A legal expert shown contracts obtained by Channel 4 News said Osborne & Little must have known the developer was based offshore, and had the potential to avoid millions in tax.

At the time, the Chancellor was the beneficiary of a family trust that owned at least 15% of Osborne and Little, so would have personally benefitted from the sale.

This scandal marked a major conflict of interest with performing the role of being the nation’s tax collector, and the setter of tax collection rules. Yet, rather than the Chancellor being removed from his role, he was permitted to stay.

Since that time, Mr Osborne has made further cuts to Corporation Tax, made a sweetheart deal with Google which saw them pay just 10% of the tax bill owed, all while continuing an assault on public services.

When not transferring the burden of taxation from those with the most to those with the least, Mr Osborne has continued his fire-sale of public assets. By the end of this financial year, he will also have sold off more public assets than any Chancellor in UK history – outperforming the most ruthless privateers of the Thatcher era.

After six years of this asset-stripping and tax-avoiding, the UK’s current account deficit is not only worse than it was in 2010, it is worse than during ANY period since records began in 1955. Furthermore, the Chancellor continues to miss his own targets on reducing the fiscal deficit (taxes versus spending), all while clocking up more debt in his first three years in parliament than even New Labour managed to in the previous 13.

That is the kind of performance that will put George Osborne in the history books – as the worst Chancellor in UK history.