The media is ignoring France's mass protests, but their spirit is spreading (TWEETS, VIDEO) - Canary 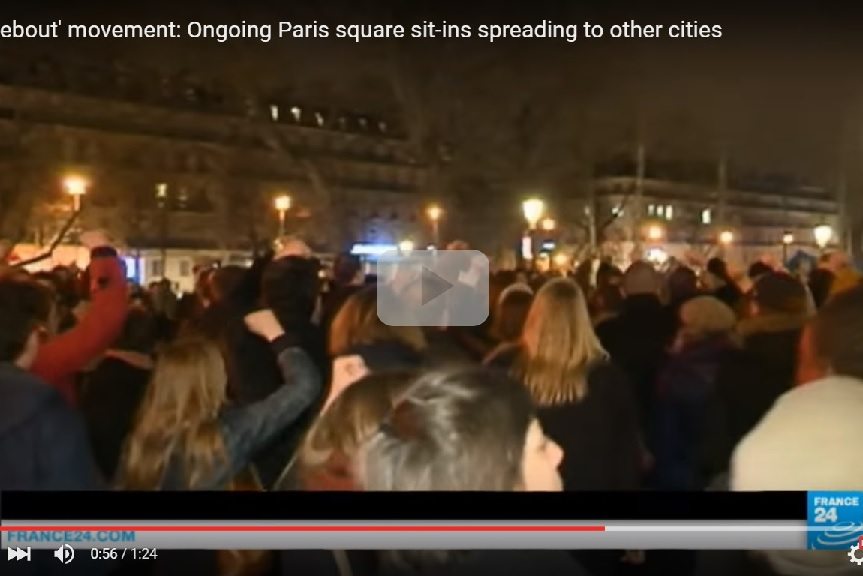 In France, there is currently a growing movement of anger at the government of President François Hollande. People’s assemblies have been organised, and city squares have been occupied. This spirit is now spreading to other cities in Europe. And Britain could be next.

The movement is now known by the Twitter hashtag #NuitDebout (or ‘Night on Our Feet’), and began on 31 March with a massive general strike – attended by over 1.2 million people – which had been organised by students and unions opposed to a planned labour reform law. The groups said the changes would make it easier for companies to fire their workers, and polls have shown that up to 70% of the French population opposes the new law.

But the march didn’t stop, and over a thousand protesters occupied the Place de la République in Paris. This drew parallels for many with the Occupy movement and the 15M/’Indignados’ movement – which saw Spanish citizens gather spontaneously in Madrid and other cities in 2011.

for days now thousands of people have occupied the main square in Paris, held debates and general assemblies, and organised working groups, movie screenings and music concerts attended by thousands… high school students are in the process of blockading schools across the country and planning yet another general strike.

On 5 April, there was a violent police eviction in Paris, but protesters returned hours later. The occupation was only planned for three nights, but political analyst Gael Brustier explains that:

the movement started growing unexpectedly, gathering up to a thousand people, voting collectively its own rules during daily meetings, launching debates and adopting a strictly non-violent rule

The New Internationalist‘s Jamie Kelsey-Fry spoke on 5 April about how this movement is:

a mass outpouring of fury at the government

This has resulted in part from the French government’s use – since November 2015’s terrorist attacks – of “extreme methods to discourage protests”, such as immediate prison sentences, rubber bullets, concussion grenades, and tear gas. As activist John Jordan told Kelsey-Fry:

It’s not just the new labour laws… It’s the boiling over of rage and the desire to construct something new from the bottom up whilst deposing a system made by the elite for the elite, a system that everyone knows is broken and cannot be fixed.

Here’s a short summary from France24:

Because of the combination of factors which have led to the #NuitDebout movement, it has grown exponentially. Kelsey-Fry describes how hundreds of thousands of people were set to attend people’s assemblies on 5 April in 35 towns and cities across France. The night before, he says, around 21,000 people had protested in Paris alone.

Here are some images from recent days:

Amazing picture of #NuitDebout in #Lyon

The spirit is spreading

#NuitDebout has now transformed into #NuitDeboutPartout (or ‘Night on Our Feet Everywhere’). Activist Sophia Lycouris says that “this is not just a French movement”, and that it has begun to “spread in cities outside France, such as Brussels and Berlin” – with large demonstrations being planned for Saturday 9 April.

This comes within days of the Panama Papers revelations, which have already seen mass protests force Iceland’s Prime Minister to resign and Britain’s Prime Minister struggle to cope with his father being linked to tax avoidance.

In the UK, Occupy London has called for protests on 9 April, saying:

Jamie Kelsey-Fry suggests that, in a European environment which has still not recovered from the 2008 global financial meltdown, citizens share a lot in common. On top of this, he says:

The Panama Papers, as with the mass leaks we see through WikiLeaks, make it clear that the 1 per cent are making a mockery of democracy and punishing the ordinary citizens with inhuman austerity and draconian measures while they hide away billions for themselves.

As France’s #NuitDebout goes from strength to strength, we could well see the growth of a Europe-wide movement. Or we could help to forge it.

– Attend the protest in London on 9 April. For more information, see Occupy London.