The #ResignCameron hashtag is trending, and it's the most brilliantly British way to end a PM (TWEETS) - Canary Workers’ Co-op 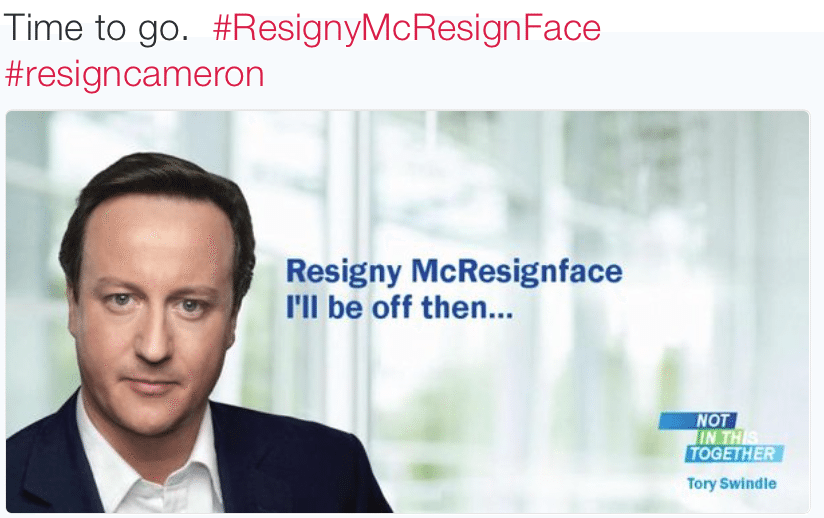 David Cameron is facing calls to resign today from people across the country, infuriated by the combination of bitter austerity policies and revelations of his family’s tax avoidance.

The Prime Minister initially attempted to wave off the Panama Leaks and the tax avoidance of his father’s family business as a “private matter’ earlier in scandal. But after huge public pressure, Cameron has been forced to admit that he has indeed made a personal financial benefit from the tax dodge. As my colleague James Wright reported on Thursday:

After days of slipping around the question of whether he profited from that fund, Cameron has finally admitted he owned shares in the trust from 1997-2010.

Looking to wipe his hands clean, he then sold off his shares in the fund for £30,000 four months before becoming Prime Minister.

Those in the position to remain unaffected by austerity are attempting to excuse this as a paltry sum, like ‘hey, it’s just 30k! Chill out.’

But this reaction shows just how far removed the people saying such things are from the majority of Brits. This ‘paltry sum’ would take a person earning the living wage an entire two years to earn.

We also do not yet know if this is even the full extent of the scandal, as the Conservative leadership have circled the wagons and seemingly disappeared from public view in an attempt to weather the storm. And the storm is fierce.

People have taken to Twitter en masse to demand the resignation of David Cameron, with over 53,000 tweets issued by Friday lunchtime. There will also be a demonstration at Downing Street on Saturday lunchtime, to demand Cameron immediately change UK tax rules or resign.

For some people, the Prime Minister’s lack of transparency is the key issue.

Well if you can't trust a chap who wants to rip up foxes with a pack of hounds who can you trust?? #resigncameron

Others found the most brilliantly British ways of demanding the resignation.

We can't trust this man to tell us the truth on anything #resigncameron pic.twitter.com/lHE5KJiSga

And some people would like it known that they are simply not over “PigGate”.

The next few days will be critical for the Prime Minister. Even if he weathers this storm, he also has the EU referendum in coming weeks. It is most likely that the EU sceptic, austerity-sceptic wing of the Conservative Party may smell blood, and go after Cameron like hounds at a fox.

If you would like to demand the resignation of David Cameron, you can join the protest at Downing Street on Saturday lunchtime. Details here.