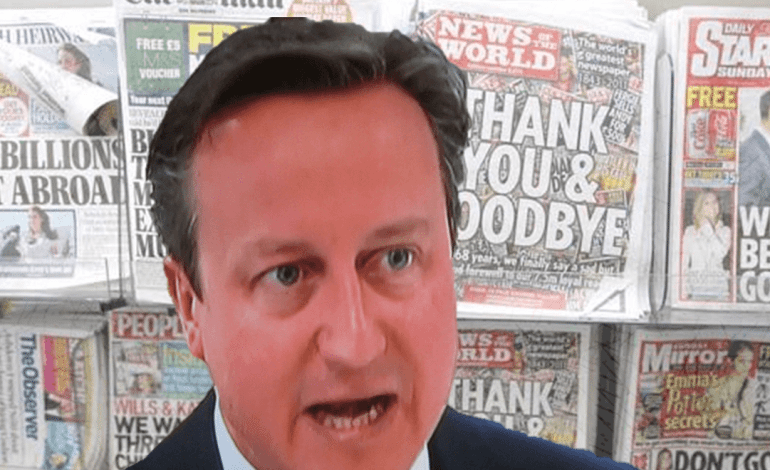 David Cameron is facing mounting pressure to leave his post this week. The Panama Leaks have produced evidence of rampant tax avoidance by the Cameron family business, and attempts to hide that avoidance to protect the Prime Minister’s position. Social media has gone into overdrive, having a field day with a previously teflon Prime Minster who finally seems to be on the ropes.

So far in 2016, the Conservative party, membership and movement is fracturing over the EU, austerity axeman Iain Duncan Smith resigned, the government aided and abetted the collapse of UK steel, and they now face a summer of joint action from teachers and junior doctors. David Cameron’s leadership has the unmistakable whiff of calamity about it.

The Prime Minister’s increasingly ruddy expression after his very public episodes of temper with the press did not go un-noticed.

As for the Prime Minister’s promise not to benefit from tax havens in the future, that really didn’t wash.

Protest singer Grace Petrie perhaps spoke for much of the UK with these tweets in the wake of the scandal.

God, these lot in government are just absolute dogshit aren't they?

I mean, really. Some days I get totally numb to it and then think, no what a bunch of cunts

Comedian and comedy writer David Schneider captured the potentially The Thick Of It style scenes playing out behind the curtains of Number 10.

Cameron: The steel thing is awful for us. We must change the news agenda.
[#panamapapers leak]
Cameron: I need everyone to talk about steel.

And it didn’t stop there. Here are some of our favourites.

With #PanamaLeaks on top of everything else in recent weeks (and years), we should be demanding @David_Cameron's resignation.
RESIGN.

And people weren’t happy with the mainstream media giving the Prime Minister a pass either.

All-in-all, it seems this latest debacle has undermined not only David Cameron, but much of the UK political class, and the establishment media. They cannot be counted on to fix our grossly unfair tax system, because they are the chief beneficiaries of the unjust status quo. Turkeys are unlikely to vote for Christmas.

But the situation if far from hopeless. There is for the first time in many years, a serious and coordinated political and public opposition to austerity politics. It can be found in the Green Party, Corbyn’s Labour, the SNP and Plaid Cymru. If we want to see what role the public can play in supporting that opposition to power, look to Iceland. The people of Iceland removed their Prime Minister within a week of the scandal. It is not impossible that such spirit and determination comes to UK shores soon.

You can report David Cameron’s family to the HMRC here.

Read up on tax at Tax Research UK

Read the information in the Panama Papers

Support The Canary to keep watching the watchmen.