While the press trounced the Junior Doctors, social media told the real story 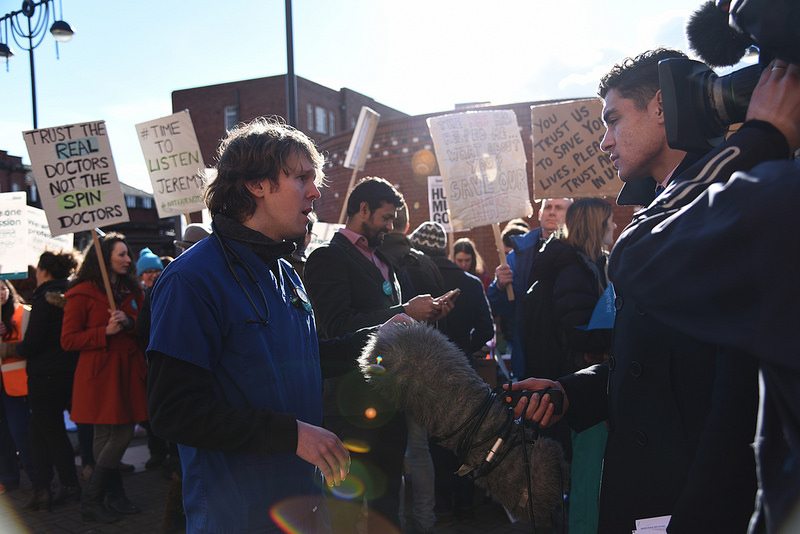 You’d be forgiven today for thinking that the UK media was in fact run by the Conservative government, as an all-out propaganda war on the junior doctors’ strike commenced with zeal.

But our ever reliable social media was there to counter the bias. Taking on the British press is no mean feat – but our keyboard warriors did us and the doctors proud. Take a look:

What’s this Radio Four? Taking the Health Secretary’s word as gospel? Someone wasn’t impressed by your coverage…

I can't listen to the BBC R4 coverage of the #JuniorDoctorsStrike any more – so bias. Twisting the facts there IS emergency care!

Hands up if you’ve ever heard of the Bath Chronicle?

The BBC’s Norman Smith let us know what the Prime Minister thought.

Some of the replies to this were brilliant.

No to be outdone:

@BBCNormanS @Jeremy_Hunt so did Andy Coulson.

The Daily Mail doing what it does best. Fear! Hysteria! Scaremongering! We’re surprised they didn’t link the strike to Diana or the weather.

Someone decided to reply with something called “The Truth”.

@DailyMailUK @joanna_jane how will there be deaths. what utter sensationalist rubbish. cancelling a routine op does not endanger life.

Where would we be without The Sun putting its two-pennies-worth in?

The NHS could be crippled as 35,000 paramedics threaten to join militant docs on strike https://t.co/uLREQSL7EZ pic.twitter.com/gBXcTaBxD8

A helpful Tweeter explained the contract for The Sun with a simple diagram.

"This is likely to be my last big job in politics" says health sec @Jeremy_Hunt #JuniorDoctorsStrikehttps://t.co/3dLlxSfBxx

This Tweeter did not appear to have any small violins available.

@BBCr4today @Jeremy_Hunt "Big job" – aye, one you've dumped from a great height onto the NHS. #JuniorDoctorsStrike

This was generally the theme for the day. The media trotting out the lines that “patients were at risk”. That “emergency care” wasn’t covered. That the “militant” doctors were dangerous.

All of this nonsense of course. As the BMA and NHS England both clearly stipulated, emergency care is fully covered and any appointments postponed (not “cancelled”) are routine ones. We are witnessing an all-out propaganda war by a complicit and servile media left flaccid and sycophantic after numerous self-induced scandals.

The junior doctors’ dispute is not about pay and it’s about more than an un-costed, unsafe and untested contract.

It’s about the very future of the NHS in this country as the Conservatives would like nothing more than to sell-off our health service to their corporate chums in the City.

Make no mistake – we need to stand resolutely with our junior doctors today, tomorrow and for however long it takes.

And judging by social media? No one is backing down.

Donate to the “Justice for Health” campaign.

Join some action in your local area.