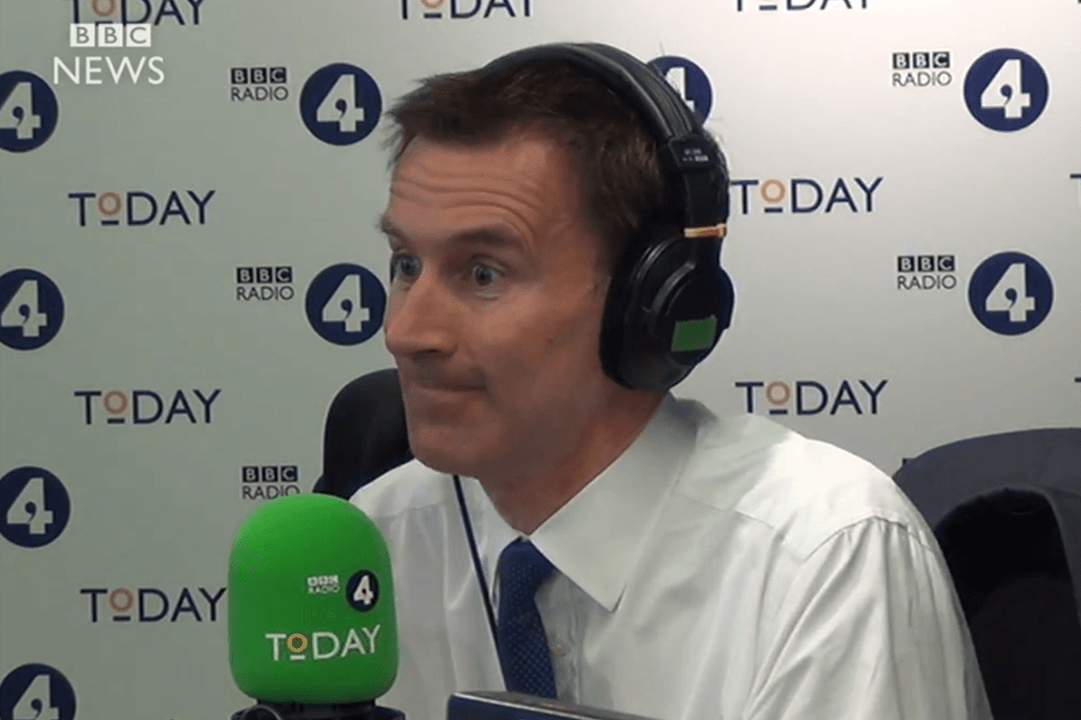 Jeremy Hunt has declared that the role of Health Secretary is likely to be his “last big job in politics”. The point he was trying to make was that he was determined to push through with his agenda for the NHS. However, his demeanour was that of a man staring at an unexpectedly lengthy retirement.

In recent weeks, Hunt’s strategy for dealing with the junior doctors dispute has been limelight-avoidance. His refusal to engage in talks led to doctors camping out in front of his office while at one point his almost total absence from public view led many to ask: “Where’s Jeremy?” However, someone clearly decided that the first ever all-out strike by junior doctors was a sufficiently important occasion and so Hunt returned to the media studios.

You must have had some long dark nights of the soul. Do you ever look in the mirror and think, ‘I’m now the problem… I’m part of the problem – I need to go for the sake of the NHS’?

Hunt’s response didn’t tackle the resignation question head-on but did suggest he doesn’t intend to stay on the political frontline for the long haul.

“Nick this is likely to be my last big job in politics,” he began. Students of body language may wish to interpret the downward glances and deep breaths that accompanied this statement. It seemed like an admission that Hunt’s career has been damaged beyond repair by his handling of this dispute.

But Hunt still attempted to make a positive point:

The one thing that would keep me awake is if I didn’t do the right thing to help make the NHS one of the safest, highest quality healthcare systems in the world.

“Do the right thing” is a phrase much beloved by David Cameron, useful politically as it can mean anything and nothing. However, Hunt’s statement of his supposed objective is revealing. He may not realise it but he’s actually describing the NHS as it was around the time he began his tenure as Health Secretary. Across a range of measures, including safety and overall quality, the NHS was found to be the best performing healthcare system among a selection of leading nations.

So is Hunt unaware of this, or is he acknowledging that so far he has presided over a drastic decline in the condition of the NHS? In which case, would he really be the man for the job of turning it round? Rather than staring, catatonic, at the wreckage of his own career, he should remove himself from the rubble of the NHS before he causes any more damage.