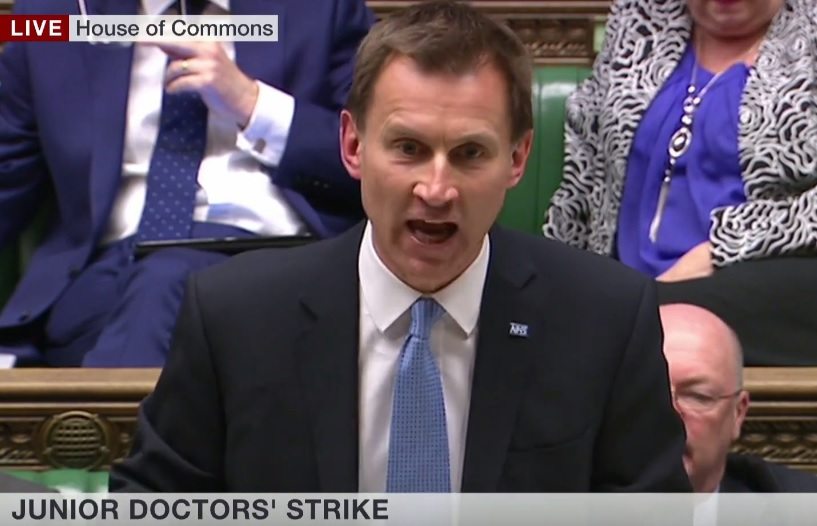 On Monday 25 April, Jeremy Hunt spoke in parliament about the junior doctors’ strike. His speech was loaded with facts and figures designed to flummox supporters of the medical workers’ action. But a key admission in Hunt’s discourse exposed the real source of his ire: it’s not the doctors at all, it’s those charged to protect their rights.

Hunt was addressing parliament following his rejection of a cross-party plan to avert the strike action. The proposal, which Hunt branded “opportunism“, called for the new junior doctors contract to be tested in a pilot scheme before being rolled out across the country. It also urged that an independent audit of the impact of the contract be carried out before implementation.

Hunt defended his dismissal of the cross-party solution, and his government’s combative role in the junior doctors’ dispute, saying:

No trade union has the right to veto a manifesto promise voted for by the British people.

This is typically skewed wording by Hunt. So, let’s break it down. The “British people” Hunt refers to is the less than 30% who voted for the Conservative party in the 2015 general election. And those people may have supported the Tories’ “manifesto promise” on the NHS, but at that point they had no idea it would conclude with enforcing unworkable contracts on all junior doctors.

And, most importantly, Hunt doesn’t even mention doctors in this provocative statement. He mentions the real source of Tory nightmares, the unions. That is what this contract imposition battle is all about, as Hunt reiterated later in the parliamentary discussion.

During the session Shadow Health Secretary Heidi Alexander questioned Hunt’s power to carry out his imposition threat, and his judgement in his handling of the dispute thus far. Hunt responded, saying:

I’ll tell her a judgement issue, it’s whether or not you back a union that’s withdrawing life-saving care from your own constituents.

Of course, Hunt failed to acknowledge he had just rejected the cross-party solution that would have ensured that life-saving care was not withdrawn. Instead, he attempted to blame the unions for placing communities in life-threatening situations. And as veteran Labour MP Dennis Skinner noted, he smirked as he did so.

In reality, the unions, on behalf of doctors, are fighting the government on these contracts to protect patients and the NHS in the long-term. This is not what Hunt is really in the business of protecting.

As the Morning Star reported, the government has also allegedly accused the doctors’ union, the British Medical Association (BMA), of using this dispute to destroy the Tory government. The BMA have said the claims are “ridiculous”, and Unite’s national officer for health Barrie Brown has noted:

These are the same sordid tactics that Margaret Thatcher employed against the miners in the 1980s and should be strongly deplored.

Seemingly, the government are now honing in on what they see as the crux of this conflict: the unions. And this should come as no surprise. The Labour party was born from the union movement, so unions are traditionally allied with the Tories’ political opposition.

But the unions pose a much bigger threat on another level: they have the might to fight for workers rights. In the Tories’ brazen new world of zero hours contracts, workfare, and mass privatisation a strong union presence is an anathema. However, for the junior doctors, teachers, paramedics, steel workers, and our public services as a whole, they are a godsend and a necessity.

There is a tremendous imbalance of power between those that give the orders and those that take them. Unions help level that playing field. That’s why the Conservatives hate them so much, and why they deserve our backing.

Write to Jeremy Hunt to let him know your views on the junior doctors contract.