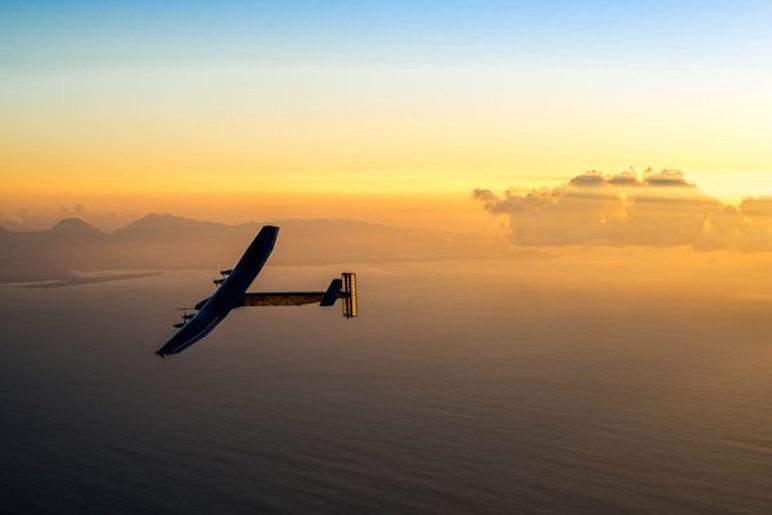 Solar Impulse 2 landed in California at the weekend after a long-awaited 62-hour, non-stop solo flight from Hawaii – without using a single drop of fuel. The journey shows that solar power is a feasible alternative to fossil fuels and that many other engineering feats may be possible with innovative thinking.

Before touching down in Mountain View, south of San Francisco, the plane’s pilot, Bertrand Piccard from Switzerland, exclaimed happily:

I crossed the bridge. I am officially in America,

We already saw the #GoldenGateBridge, any suggestions for what to see next? pic.twitter.com/BG53zgHLiy

The plane, which flies much slower than normal planes – at about the speed of a greyhound – weighs over 5,000 pounds and is equipped with 17,000 solar cells that power its propellers and charge its batteries for when the sun isn’t shining.

Solar Impulse 2 was built to show what’s possible if you think outside of the box. As the Solar Impulse website states, the project is all about:

Two pioneers flying around the world in a solar airplane, to promote clean technologies

It’s a feat of engineering and goes to show that long-distance travel using renewable energy sources is a feasible possibility.

But as Al-Jazeera reports, this plane isn’t so much about solar-powered planes replacing those powered by fossil fuels, as solar-powered air travel is not yet commercially practical. Instead, it’s about showcasing renewable energy and inspiring people to think about using clean energy in revolutionary ways.

Many other engineering feats may also be possible

As Piccard told CNN after his voyage:

It’s a new era. It’s not science fiction. It’s today. It exists and clean technologies can do the impossible.

Piccard slept in bursts of only 20 minutes at a time during the flight, using heating pads to keep himself warm and heat his pre-prepared meals. He reports using self-hypnosis to keep himself awake.

Leg9 from #Hawaii to #California 62hours is done! Happy that everything went well! Relive it https://t.co/IlwJMmTHJQ pic.twitter.com/8lPgPD1anA

Piccard is one of two pilots who have been taking it in turns to fly the solar-powered plane that started its journey in Abu Dhabi in March 2015. The plane has since made stops in Oman, Myanmar, China, Japan and Hawaii. Its longest leg so far, from Japan to Hawaii in July 2015, was piloted by fellow Swiss citizen Andre Borschberg.

It hasn’t always been “plane sailing” for Solar Impulse 2. After the Japan to Hawaii leg, the plane’s journey stalled for 10 months, as the flight brought to light problems with the plane’s batteries.

Weather has also been an issue along the way, as the plane was grounded briefly in Japan with a damaged wing.

Needless to say, the Solar Impulse 2 team were ecstatic to make it to California with no problems.

Did you enjoy the last flight? Help us to share the message #futureisclean further : https://t.co/SlsgXolC5H pic.twitter.com/FALnBLjdEk

Solar Impulse 2 will make three more stops in the United States before crossing the Atlantic Ocean to either Europe or northern Africa.

The mission engineers, based in Monaco, are continuing to work on the next flight plan. In the meantime, we’re looking forward to seeing Solar Impulse 2 take renewable energy to new heights!

Read other Canary stories on renewable and sustainable energy