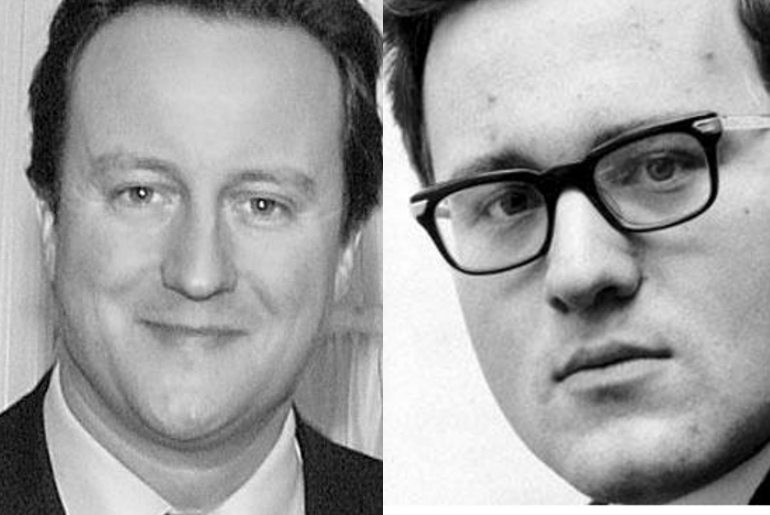 “Fantastically corrupt”. This was how David Cameron described Nigeria and Afghanistan to the Queen on the eve of the first ever ‘Anti-Corruption Summit’ in London. But as a new overarching investigation by The Canary shows, the issue of unorthodox offshore business practices within the Prime Minister’s own ranks leave a lot to be desired.

As we exclusively revealed on Tuesday, major Conservative Party donors names were hidden in the depths of the Panama Papers data release. From the Chief Executive of Heathrow Airport to the former Chairman of the Olympic Organising Committee, via the owners of The Telegraph, the issue of offshore tax avoidance sits right on David Cameron’s doorstep.

But in the case of multi-millionaire David Rowland, the issue seems to have crossed the doorstep and gone straight into the Conservative’s living room.

Rowland is a prolific Tory donor, having given more than £4m to the party over recent years. A property developer by trade, he was set to become the Conservative party Treasurer in 2010. But after the revelations regarding his non-domiciled status (he lived in Guernsey), he declined the role but moved back to the UK so as to be able to legally donate to the party.

Sadly, it would appear most of his financial interests didn’t move back with him.

Rowland’s main business is Blackfish Capital Management, an investment firm specialising in funds and private equity. Registered in London it would appear the company isn’t doing terribly well. For the year ending 2014, a loss of over £300,000 was made, which meant the company paid no tax. But look closely and you’ll see that Blackfish were charged over £500,000 in fees by other companies belonging to the Rowland empire.

Pack your speedos and grab your passport. This is where we go offshore.

The singular shareholder is Newstead Enterprises Limited, who fall under the jurisdiction of the British Virgin Islands meaning they are subject to their tax and accounting laws. This company is, in turn, a shareholder in five different entities and one trust detailed below: 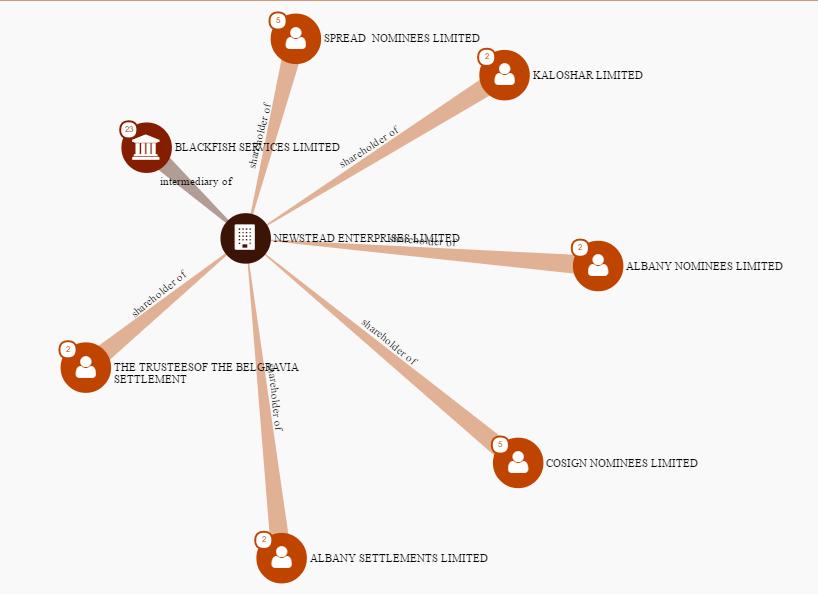 There is an intermediary that links all these companies together. That is, a middleman that connects all the different entities back to Colegate Management Limited at the UK end of this chain (remember them? The ones who Rowland’s company Blackfish gave £106,000 to while not making any money itself). The middleman in all this is one Blackfish Services Limited, which is ‘linked’ to the United Kingdom, although no address is provided.

While the International Consortium of Investigative Journalists (ICIJ) have withheld the financial value of companies, it is safe to assume that money is passed between them. So, let’s break this down into layman’s terms.

Money from Rowland’s ‘Blackfish Services’ gets passed between two different companies in the UK as charges before being sent to a third company in the British Virgin Islands. Here, it most likely gets passed around five other companies, who in turn pass it around another twenty – until it ends up somewhere.

The point of all this? The company which is Rowlands’ official business, Blackfish Services – didn’t pay any tax. Please note, this is, of course, perfectly legal. We wouldn’t dream of accusing Mr Rowland (worth an estimated £750m) of doing anything otherwise.

While the value of money that Blackfish sought to avoid seems relatively small, what we don’t know is the value of any of the other companies involved that are registered outside the UK. Also, it’s the “somewhere” that the money ultimately ends up which is important.

Newstead Enterprises (where the £106,000 from Blackfish went) are owned in part by Albany Nominees Limited. They are based in Guernsey, and in turn are owned by one shareholder, Abbeyville Aviation. They are then owned by a final shareholder First Rate Worldwide Corp, who are also in Guernsey at an address called Old Stables – which shares the same postcode as 9 other entities in this spider’s web. This ‘stable’ exists on Havilland Hall Estate, to which 23 companies ultimately return to.

Havilland Hall is the largest private estate on the island of Guernsey and is owned by – yes – the Rowland family. Companies also exist at the end of these trails in Gibraltar, Panama, the British Virgin Islands, Jersey and Luxembourg; Mr Rowland appears to like travelling. Note also that many of the beneficiaries of these companies and trusts are not actually David Rowland himself, but his son and grandson (who share his first and last name, but with different middle names).

But, what does this all mean? And what is the significance of the information?

What it all means is this: 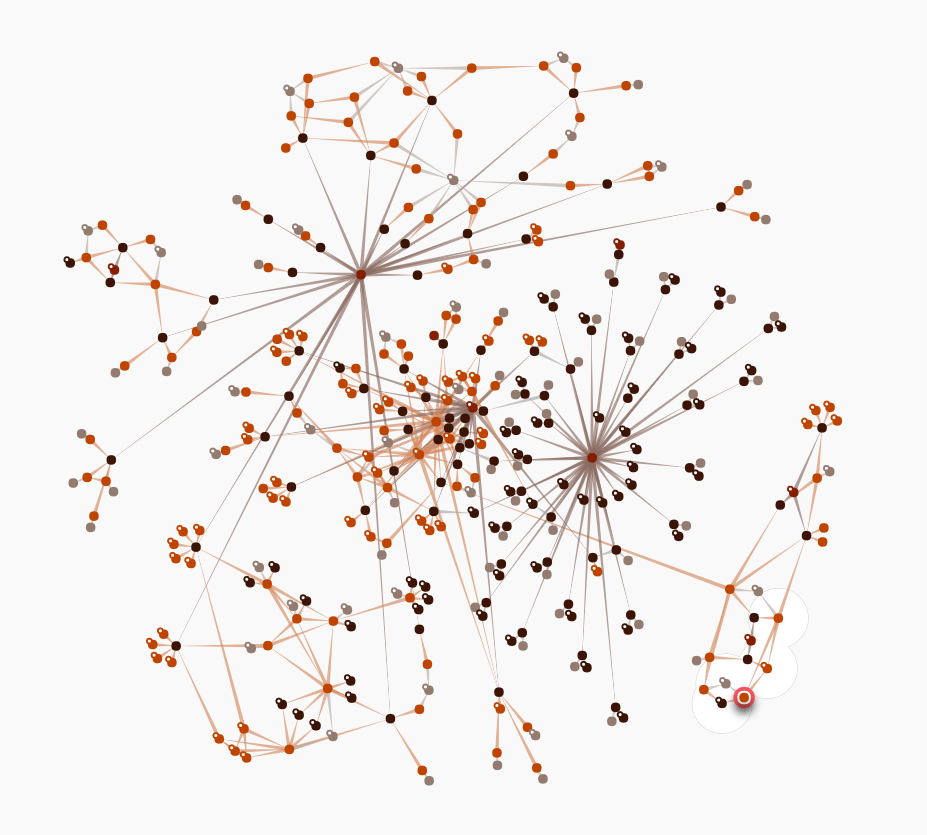 This is not abstract art, or the scrawlings of a five-year-old. This is a visualisation of all the companies linked to Rowland’s game of offshore cat and mouse.

From one company in London, registered at one address and owned by one man – 126 separate companies, with 11 trusts, based out of nine different addresses all operate.

These all exist for the purpose of reducing someone’s tax bill. And 126 are just the ones that are directly related to the middleman Blackfish Services Limited (the red dot at 11 o’clock on the top left with grey lines coming out). Indirectly, dozens more begin to emerge, with separate middlemen and even more addresses.

The Canary is not accusing Mr Rowland of illegal activity. The practice of moving money offshore, to reduce your tax bill where you live and ultimately depriving the ordinary man, woman and child on the street of much-needed public services is perfectly legal and above board. If there were laws relating to morals and ethics, however, Mr Rowland and many others may well be up in court.

But what this does show is the mind-blowing complexity of these schemes, and the lengths and intricacy people will go to to make themselves richer. Mr Rowland is one man with one intermediary. There are another 1,923 intermediaries operating from the UK named in the Panama Papers. Do the maths. If you can.

David Cameron said in his Anti-Corruption Summit on Thursday:

Corruption is an enemy of progress and the root of so many of the world’s problems. It destroys jobs and holds back economic growth, traps the poorest in desperate poverty, and undermines our security by pushing people towards extremist groups. The battle against corruption will not be won overnight. It will take time, courage and determination to deliver the reforms that are necessary. But we cannot hope to solve the major global challenges we face without tackling the exploitation, fraud and dishonesty at their heart.

All well and good. But when you have one man, who has donated over £4m to the party of government and uses the very systems the Prime Minister claims he wants to clamp down on, to stop people and companies avoiding tax meaning he can better afford to donate these kind of sums – are Cameron’s words merely hollow platitudes to stem growing disquiet amongst the public?

Time will tell. But if David Cameron is serious, he has his work cut out.

You only have to look at the tax affairs of Mr David Rowland to realise that.

Sign the petition calling for an end to tax havens.

Search the ICIJ’s database yourself.

Featured image via Wikimedia and LeftFootForward