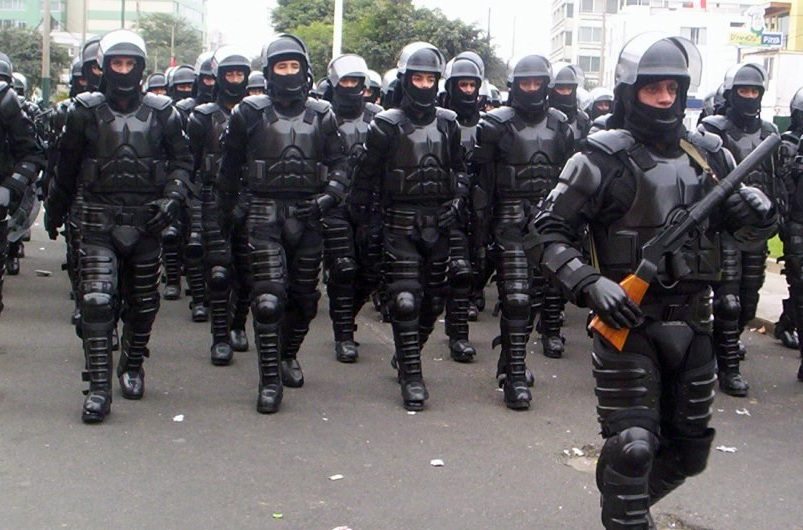 A recent investigation has delved into the unsettling deliberations in big business around “super-strain pandemics” of “political violence” – meaning, in part, public demonstrations and protest movements – and what to do about them. Its findings are eye-opening and perverse, but essentially point to one ugly truth:

There’s billions to be made in civil unrest, and the defence industry is armed and ready to take advantage of it.

The investigation, carried out by Nafeez Ahmed for Insurge Intelligence, centers on two reports. The first was created by a global business intelligence firm and focuses on the international market for ‘riot control systems’. Abhay Singh, a technology analyst at the company explains:

Protests, riots, and demonstrations are major issues faced by the law enforcement agencies across the world…In addition the increase in incidents of civil wars in countries such as Syria, Iraq, Lebanon, and Egypt along with an increase in the global defence budget will generate demand for riot control systems.

And, according to the report, these “issues” and “incidents” will generate demand to the tune of $5bn over the next five years.

Such ‘systems’ have garnered attention in the UK just this week. Greater Manchester police have drawn criticism for the use of divisive language during a mock suicide bombing exercise in the Trafford Centre. Such exercises are not uncommon in the UK today and are, of course, necessary to ensure our forces are prepared for an actual terrorist attack.

But, as Singh noted, terrorism events are not the only target of these ‘riot control systems’. In fact, the report gives the protests in Ferguson – over the death of an unarmed black man at the hands of a police officer – as an example of why demand for such systems is booming. It also stresses that “urban warfare”, which is the label it gives to the 2014 Umbrella Revolution in Hong Kong where thousands of protesters blocked roads, has compelled governments and law enforcement agencies to take up these sorts of arms against civilians.

Ahmed identifies a second report published by global insurers Lloyds of London. This report describes the full range of “political violence” necessitating these ‘riot control systems’. The spectrum is divided into “super-strains”, of which there are three:

Anyone who visited London on 16 April would have seen the “political violence” described in category B in full swing. That day 150,000 Britons took to the streets demanding reforms of the current UK government’s policies, and the resignation of the Prime Minister. Some call this democracy. But it seems that globally governments are viewing such action as a dangerous threat, and planning to defend themselves against it.

In the government’s defence, the language and ideas flouted by these corporate analysts isn’t exactly soothing. The report by Lloyds, for example, warns that “political violence” is “contagious”. Trevor Maynard, Lloyds head of exposure management and reinsurance, cautions:

The report suggests that instances of political violence contagion are becoming more frequent and the contagion effect ever more rapid and powerful.

Not exactly the kind of ‘analysis’ that breeds a liberal government, but it could line the pockets of defence companies handsomely.

It is though extremely disturbing on a number of levels. Firstly, kitting out our police to look like robocop is going to do nothing to heal the broken trust between the force and civilians, often in minority communities, over the last couple of decades. As journalist Glenn Greenwald observes, in the US, where police militarisation has become the norm, it has:

resulted in a domestic police force that looks, thinks, and acts more like an invading and occupying military than a community-based force to protect the public.

Secondly, in the UK such developments cannot be seen in a vacuum. The current government is doing their very best to force through the draconian Investigatory Powers bill, which will essentially legislate for the security services to collect all the electronic data of UK citizens. Advocates for the measures attempt to placate critics with the notion that although information will be collected, only the data of ‘criminals’ will be targeted. But if the act of protest is viewed as “political violence” can anyone that engages in it escape the spies attention?

Finally, and most importantly, what impact will an increasingly hostile environment have on its citizens? It will, of course, deter some from expressing dissent, and further weaken the expectation of democratic accountability. It also dangerously tips the already unequal balance of power distinctly in the powerful’s direction. That is no way for a healthy democracy to function.

Essentially, this investigation draws attention to the formidable architecture of oppression being built around us. How it is used is up to the government of any given moment, whether malevolent or benign. As whistleblower Edward Snowden has warned these are systems of “turnkey tyranny“. And once in place they are very difficult to tear down. That should be of great concern to all of us.

Tell Theresa May what you think of the authoritarian Investigatory Powers bill here.