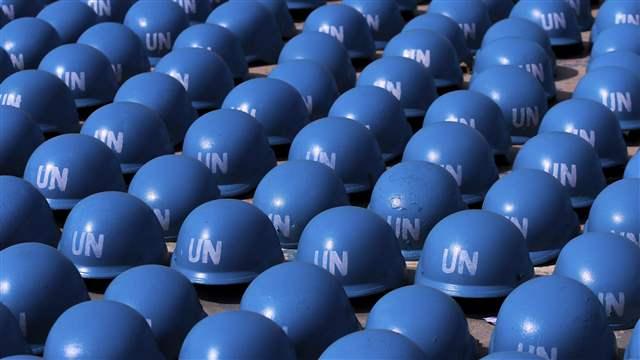 Imagine you are a hungry child, in the middle of a war zone. Soldiers from Europe have been sent to protect you and help maintain peace. But when you approach them for food, they rape and sexually abuse you and your  friends. This is the grim reality for the children of the Central African Republic.

A new report has provided strong evidence that UN peacekeepers charged with the duty of protecting children have been systematically raping and sexually abusing them instead. The devastating report has exposed the abuse by French forces in the Central African Republic.

A report by the AIDS-Free World’s Code Blue campaign states:

A report by the AIDS-Free World’s Code Blue campaign confirmed that U.N. and French troops in the Central African Republic abused at least 98 girls. At least 98 girls from the Central African Republic were sexually abused by United Nations peacekeepers and French troops and four of the girls were forced to have sex with a dog by a French commander, the U.S.-based AIDS-Free World’s Code Blue campaign said in a press release Wednesday.

The report makes extremely distressing reading, detailing a pattern of abuse by French peacekeepers whose duty it was to protect already traumatised and desperate children.

An independent review by the International Peacekeeping Forces in the Central African Republic has detailed an eye watering list of atrocities committed by French troops of the Sangaris force operating a peacekeeping mission in the Central African Republic. The allegations involved witness and survivor testimony from children as young as 8 years old, who were forced to submit to acts of rape and sexual abuse, in exchange for cash or food.

In one interview, conducted with a 9 year old boy and his mother, the child states that:

They asked us what we wanted. We answered that we were hungry. The short man told us to first suck his bangala (penis). I was afraid but because I was hungry I accepted and I entered first into the shack. My friend followed me. The short man who was upstairs on the big weapon came down and put his bangala out of his pants. The bangala of the thin one was for my friend. Their bangala were straight in front of us, at the level of our mouths. They were standing as if they were going to urinate. They told us to suck and we did it. None were wearing condoms. After some time the short man urinated in my mouth and the other did it on the floor. At the end they gave us 3 packs of “rasquette” (military food ration) and some cash.

The scale of abuse is horrifying, but the UN’s initial response to the allegations compounded an already appalling status quo. As the report states:

Instead, information about the Allegations was passed from desk to desk, inbox to inbox, across multiple UN offices, with no one willing to take responsibility to address the serious human rights violations. Indeed, even when the French government became aware of the Allegations and requested the cooperation of UN staff in its investigation, these requests were met with resistance and became bogged down in formalities. Staff became overly concerned with whether the Allegations had been improperly “leaked” to French authorities, and focused on protocols rather than action. The welfare of the victims and the accountability of the perpetrators appeared to be an afterthought, if considered at all. Overall, the response of the UN was fragmented and bureaucratic, and failed to satisfy the UN’s core mandate to address human rights violations.

Unfortunately, the UN continued to drag its heels on dealing with the matter, until a campaign was launched by Samantha Asumadu and Guilaine Kinouani. The #PredatoryPeacekeepers campaign involves a petition, some serious hard graft to raise awareness online (the hashtag trended on Twitter at one point) and much lobbying of the UN to adopt the 12 recommendations of the independent review by International Peacekeeping Forces in the Central African Republic (CAR). The campaign also calls on French troops to be removed from CAR, while the abusers and the culture of impunity are dealt with. Samantha Asumadu spoke to The Canary about what drove her and her colleague to begin their campaign, saying:

I have been keeping track of UN peacekeepers crimes since 2012 and the reports coming out of CAR are horrendous, heinous, hard to find a way to describe it, or imagine the terror those children felt. Let’s be clear here, these men are terrorists.

However we are also demanding the immediate removal of French troops from CAR. France is a permanent member of the UN Security Council. Their removal from CAR would be a strong indication that this time finally the UN intend to take the abuses of African children by supposed peacekeepers seriously.

The campaign has done an impressive job of shining an unmissable spotlight on this darkest of circumstances, and has gathered extensive media coverage, including by The Telegraph, The Toronto Star, and CNN. Asumadu also appeared on BBC World News, forcing UN deputy commissioner Diane Corner to comment on the matter.

This growing pressure is starting to yield real world results that will provide a safer environment for the children in CAR. Chief among them, the UN has just adopted its first resolution tackling the sexual abuse of children by peacekeeping forces.

On top of this, the UN is beginning to challenge troops on the ground with a series of provocative posters aimed at ending the culture of impunity. 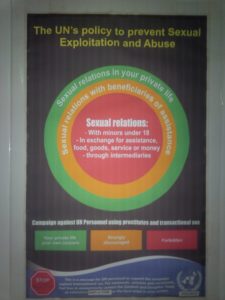 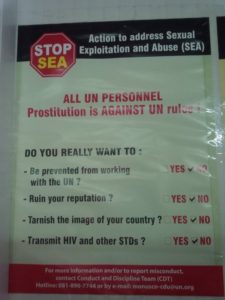 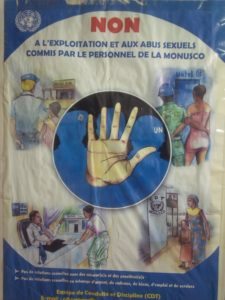 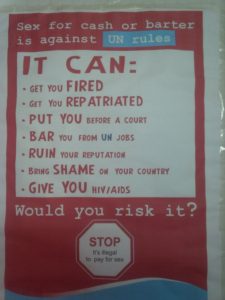 However, it has not been an easy ride for the campaigners – who faced intransigence from the UN, and an astonishing reaction from a group of established feminist writers and journalists in the UK. Commentators such as Helen Lewis and Hadley Freeman sadly chose to dedicate more time to pillorying the campaigners, than supporting the abused children.

You are a gatekeeper who has lost leave of your senses @helenlewis pic.twitter.com/ravAS7NBzg

She's tweeted me about this, asking for a RT. I wd have been more sympathetic if she hadn't called me a racist the week before

This embarrassing episode by the commentariat needs to be filed under ‘Unfortunate Ranking of Priorities.’ As one commenter put it:

Thoroughly disgusted by the many white feminists with platform prioritizing their own egos over the #PredatoryPeacekeepers campaign.

Thankfully, while no doubt distressing for the campaigners, this behaviour did not derail the campaign. Thousands have continued to sign and share the petition – making #PredatoryPeacekeepers truly grassroots and public-led. But the fight is nowhere near over. The peacekeepers are still in place, and children are still at risk. We encourage our readers to get involved and help bring this horrific abuse to an urgent and permanent end.