As the Queen celebrates, a huge number of other pensioners face dire poverty - Canary 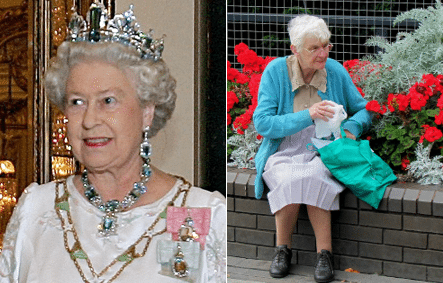 As the Queen celebrates her 90th birthday nearly 1 million over-75’s are living below the poverty line in the UK, according to a shocking report into the quality of life for pensioners.

The charity Independent Age commissioned a study into the financial circumstances faced by older people who lived through the second world war. The findings did not make for pleasant reading.

Around 950,000 people in the age group studied live below the poverty line. In other words, they survive on less than 60 percent of the UK median income after housing costs. Nearly three-quarters of a million over-75s have no source of income other than the State Pension and benefits. Out of these, nearly 400,000 are women completely reliant on state financial support. And overall, 750,000 people are not claiming the Pension Credits they are entitled to.

Independent Age highlighted this starkly. They spoke to a lady called Beatrice, who said:

I have to live within my means. Last Christmas, people asked what I wanted and I just said, give me money instead of gifts. I just have to cut my cloth. When you get older, the more you need some things, especially for health. As my knees get worse, I can’t go out without braces.

She is also ‘worried sick’ about the freezer breaking because it allows her to save money through bulk buying: “If it does pack up, I don’t know what I’ll do; all that is playing on my mind.”

There is also a stark difference between the circumstances of those over 75, compared to those under.

Older pensioners’ incomes are on average £59 a week lower than younger pensioners, and £112 a week lower than working-age adults, or almost £6,000 a year. A fifth of those aged 75 and over are living below the poverty line, including a quarter of single women. Over-75s are also twice as likely as under-75s to have been in poverty persistently for the last four years. Housing is also an issue, with nearly 3.9 million over-75’s living in privately rented accommodation – with 25% living below the poverty line.

Should we be surprised by these figures? Possibly not.

A report by the Institute for Fiscal Studies (IFS) in 2007 warned that:

Without further substantive reforms to taxes and benefits beyond those proposed in the Pensions White Paper (Department for Work and Pensions, 2006a), relative pensioner poverty will stop falling and remain fairly stable until 2017–18.

What the IFS warned of nearly a decade ago has been, in some respects, meted out.

A report by the charity Age UK on poverty in old age from 2014 noted that:

The latest figures from 2014 also seem to correlate with this. The number of pensioners in relative poverty (before and after housing costs) has marginally fallen, but those in absolute poverty has increased: 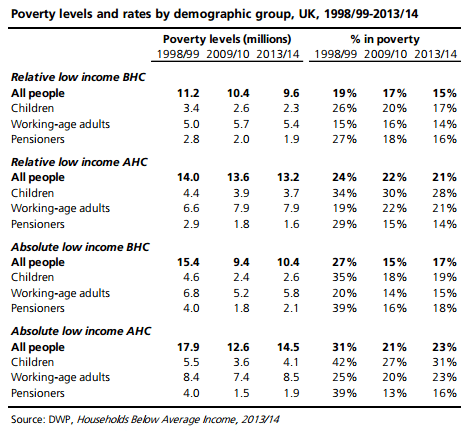 It would be foolish to assume that inequality simply ceases to exist at retirement age, but that is exactly what some of the recent rhetoric around ‘intergenerational unfairness’ does. The ‘silent generation’ of older pensioners, renters and single women have missed out on many of the gains of recent years.

While action needs to be taken by the government now to address the shameful figures in today’s report, consideration must also begin to be taken for the next generation of pensioners.

With the average 35-year old now forecast to need a pension pot of £660,000 to maintain current living standards in retirement, and with the number of homeowners aged 25-34 having nearly halved since 2004, the future for many in not looking bright.

Instead of ignoring advice from the likes of the IFS, this government needs to act now – otherwise another generation will fall foul of the poverty trap in later life.

Volunteer to ‘Be a friend’ for someone near you.