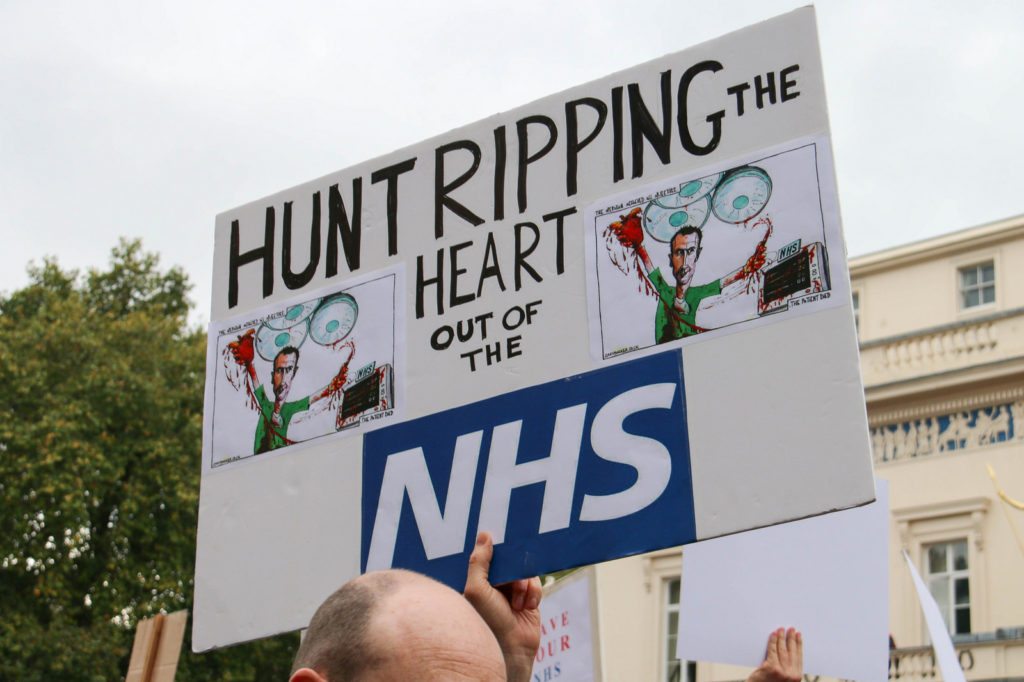 A group of junior doctors are taking Jeremy Hunt to court over the controversial new contract – but have set him one, final, ultimatum to avoid the action.

The Justice for Health group, led by five junior doctors, has called on the Health Secretary to acknowledge that he has no legal power to impose the contract. The new deal, which is currently the subject of a protracted industrial dispute between the Department of Health (DoH) and the British Medical Association (BMA), is due to start rolling out in August.

But the legal action currently being taken may well halt its progress – or even put the whole contract into jeopardy.

What Justice for Health are claiming is that under his remit Jeremy Hunt does not have the legal power to force the contract upon the junior doctors via their employers such as NHS Trusts or GP groups. He merely can be involved with negotiations, approve the terms of the contract and take steps to lead to its introduction.

A letter (pdf) sent to the DoH’s legal team makes it explicitly clear just what the problem is. Mr Hunt has repeatedly stated that he will either ‘impose’ or ‘introduce’ the contract – but then has denied that he has ever done this.

The most telling instance was at a speech to the King’s Fund in July last year. In reference to negotiations with the BMA stalling, Mr Hunt said:

But be in no doubt: if we can’t negotiate, we are ready to impose a new contract.

The Justice for Health group’s solicitors also highlight nine other occasions where the Health Secretary or his legal representatives have explicitly said that he has the legal power to do the disputed actions surrounding the contract. But it goes further.

It also highlights a letter from the DoH legal team:

We understand from your letter of 15 April 2016 that the Secretary of State is (in that letter at least) asserting that he was not “imposing the junior doctors’ contract” but merely taking a lead role in negotiations and discussions between NHS Employers and the BMA. Further, that the Secretary of State is entitled to approve the terms of model national contracts for among others junior doctors and “to take steps leading to the introduction of model national contracts by the various employers…”

This is the crux of the matter. In a legal document, the Health Secretary (via his legal representatives) has stated that he is not imposing the contract, but merely taking steps to assist in the process of its introduction and negotiations surrounding it.

This flies in the face of everything he has stated on the record via parliament and the government – and this is crucial.

If Jeremy Hunt is found by a court to have operated outside his remit as Health Secretary (by imposing the contract) it throws the whole process so far into question.

The industrial action that has been taken by the BMA was based on the fact that the Health Secretary had threatened, then announced, imposition of the contract. It would mean that negotiations so far may well be null and void, and the contract would have to go back to square one.

Furthermore, it may well mean that Jeremy Hunt has misled parliament, the BMA, and the public over the contract. Serious accusations indeed.

Speaking to The Canary Dr Marie-Estella McVeigh, one of the junior doctors leading the Justice for Health campaign, said:

The pressure is mounting for Mr Hunt to be honest with the British public and admit he does not have the power to impose a contract.  Last week we sent a letter with a series of questions to get further and better understanding of his position on the matter, is he imposing, introducing or implementing?

This is our last attempt to seek a clear statement from Mr Hunt, before we go to court. If he refuses to do so, we can ask the court to determine the issue, knowing that we’ve attempted everything possible to reach a settlement.

Last week saw the embattled Health Secretary in hot water over claims surrounding social care for the elderly, accusations of using selective and inaccurate evidence over his plans for a seven-day NHS, pressure over the scrapping of the NHS students’ bursary and a trouncing by the Public Accounts Select Committee over the dire state of the NHS workforce.

With the court hearing brought by Justice for Health set to begin on the 8 June, Mr Hunt is running out of time – and the junior doctors have made their demands very clear:

Either admit that he has no powers to force the contract upon them and has thus far acted inappropriately – or they will see him in court.

Attend the Bursary or Bust rally in London.