While everyone watches the Queen’s speech, the Tory electoral fraud scandal is growing - Canary 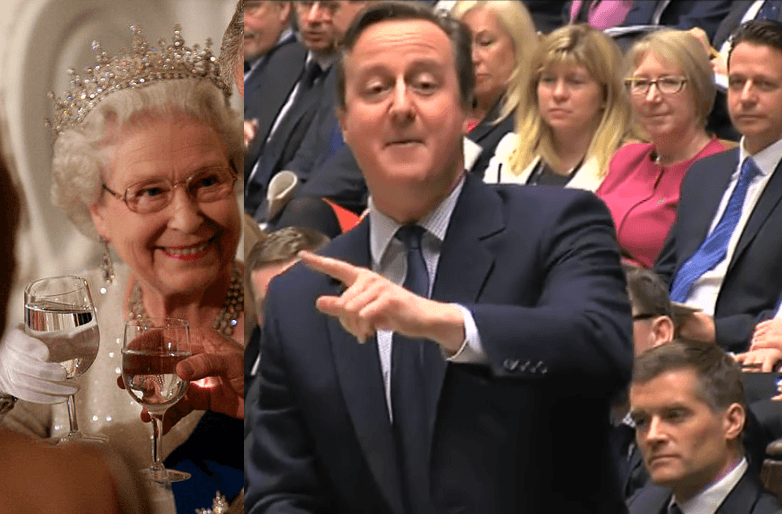 While everyone focuses on the Queen’s speech, the Conservative electoral fraud scandal continues to grow. Fresh, hard evidence has surfaced which vindicates claims that the Conservatives broke election spending limits with their battle bus campaign.

What had formerly only been found in online commentary and analysis, is now available in a physical copy. Blog posts can be changed or removed – but printed material cannot.

A senior political correspondent at The Telegraph wrote a book entitled Why the Tories Won: The Inside Story of the 2015 Election. The book confirms that the buses were used specifically to campaign in marginal seats:

This is totally at odds with the Conservative party’s position that the costs of the bus are national spending.

The Electoral Commission has clear guidelines on electoral spending limits:

There are two types of spending by or on behalf of parties at elections. These are:

Party campaign spending on campaigning to promote the party and its policies generally. For example, national newspaper adverts for the party, or leaflets explaining party policy. It also includes spending on promoting candidates at elections where the party nominates a list of candidates for a region, instead of individual candidates for local areas.

Candidate spending on campaigning to promote a particular candidate or candidates in their local area. For example, leaflets or websites that focus on one or more candidates and their views.

Different rules apply to the two types of spending.

In some cases, if the battle bus costs had been declared as candidate spending, it would’ve pushed the candidate over the spending limit.

The Conservatives claim the battle bus is national, not candidate spending. However, as the book tells, the battle bus was being used to deploy activists in specific, marginal constituencies.

The book also raises another problem for the Conservatives. It states:

During the short campaign, the Tories deployed one train of fifty people and five buses – two in the North-West, one in the Midlands, another in the South-West, and a Special Advisor’s bus leaving CCHQ – every day.

Meanwhile, the Code of Conduct for Special Advisors reads:

If a special adviser wishes to take part in an election or by-election campaign, he/she is able to do so in their own time and out of office hours. They may not use annual or unpaid leave for this purpose.

With the agreement of the Prime Minister, special advisers can remain in post during the General Election campaign period. Those who remain in post to work on government business must ensure that they do not use official resources for party political purposes and that any participation in the campaign is in a special adviser’s own time and outside office hours.

Considering the Special Advisor’s bus was leaving CCHQ “every day”, it is hard to see how they were campaigning “in their own time”.

Aside from a probe by the Electoral Commission, at least 14 police forces have confirmed they are currently investigating the findings from Channel Four News and The Mirror.

The fresh, hard evidence contained within this book is going to be a thorn in Cameron’s backside. It will be hard for the Conservative party to sidestep this.