Israel just appointed a fascist into government, as Minister of Defence - Canary 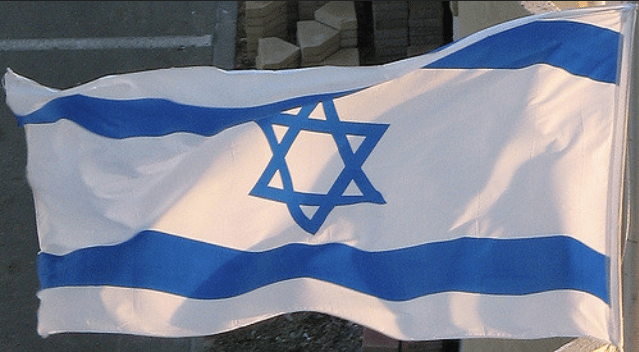 If anyone was hoping for a lessening of Israel’s hostilities towards Palestinians, those hopes were dashed with the appointment of extreme right-winger Avigdor Lieberman as Minister of Defence – a man who advocates the ethnic cleansing of non-Jews from Israel, thinks Palestinians don’t exist, and has threatened to nuke Iran.

It previously seemed like it would be quite a challenge to find a defence minister to the right of incumbent Moshe Yaalon. As Asa Winstanley reported in Electronic Intifada last year:

Speaking at a conference in Jerusalem, Yaalon threatened that “we are going to hurt Lebanese civilians to include kids of the family. We went through a very long deep discussion … we did it then, we did it in [the] Gaza Strip, we are going to do it in any round of hostilities in the future.”

The Israeli official also appeared to threaten to drop a nuclear bomb on Iran, although he said “we are not there yet.”

Yaalon has overseen a brutal expansion of the illegal settlement building programme and other means of ethnically cleansing key cities of non-Jewish (mostly Palestinian) citizens. He also led the disastrous 2014 assault on Gaza known as Operation Protective Edge. I was in Gaza, reporting on the massacre, and you can see the results of his handiwork in my reports from that time.

But Lieberman is worse.

The Problem with Lieberman

Lieberman is Israel’s former Foreign Secretary and founder of the Yisrael Beiteinu party – a hard right, socially conservative faction popular with Jewish Israelis of Russian descent. He was forced to resign in 2012 while answering charges of fraud. But like some sort of horror movie spectre, he’s now back to haunt Israeli politics once more.

The former Foreign Minister told Israeli radio last year that Israel should reoccupy the Gaza strip (it never left, considering it simply built a prison wall around the place). What Lieberman actually meant was that he wishes to rid the Gaza Strip of its non-Jewish inhabitants, or as he put it: “return to the Gaza Strip and conduct a thorough cleaning“.

Like Prime Minister Benjamin Netanyahu, he is against the establishment of a Palestinian state, saying in 2011:

A Palestinian state will be an extremist one that will undermine stability in the entire region.

But the new Defence Minister has zero respect for non-Jews with Israeli citizenship, too. He recently started a campaign to demand that all Arab citizens of Israel must sign a ‘loyalty oath‘ to Israel and its occupation or have their citizenship revoked.

World War II ended with the Nuremberg Trials. The heads of the Nazi regime, along with their collaborators, were executed. I hope this will be the fate of the collaborators in [the Knesset].

Ironic choice of words given his total disregard for international law and the institutions which uphold it. In 2015, for example, when the International Criminal Court launched an inquiry into potential war crimes by Israel, Lieberman began a public project to have member states withdraw their funding for the court.

This is the same man who will now be in a position to sign off on the expansion of Israel’s illegal settlement building project, prevent food, water and basic supplies from entering the Gaza Strip, launch the next military assault on the strip, expand the Apartheid Wall and constriction of the West Bank, and so on. It is the kiss of death for any hope of a just peace in the region.

Fascism on the rise in Israel 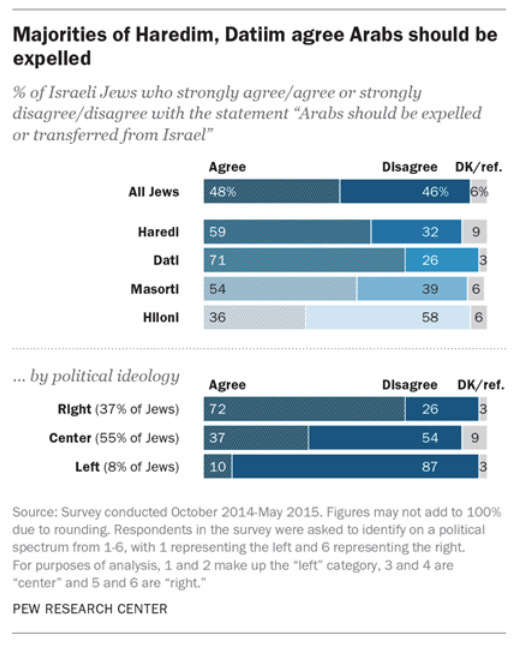 Why on earth would Netanyahu appoint Lieberman – a man he is known to personally dislike – into the government?

It is a lamentable fact that in Israel today, the open expression of racist views and policies isn’t only tolerated – it’s actually popular.

A study by the respected Pew Research Center in March of this year made extremely sad reading. Just under half of all Jewish Israelis surveyed strongly supported the ethnic cleansing of Arabs (note that there are both Muslim and Jewish Arabs within Israel).

This survey result came as no surprise to those of us who spend time in the country and have witnessed the rapid swing of Israeli society to the right over the last decade. Israel’s system of ethnic apartheid and hostility has become more visible, and more entrenched, over this time. We have seen:

Some might wish to argue that all this happened because of Benjamin Netanyahu and his right-wing government. But the truth is that this near genocidal narrative has become mainstream in Israel. The anti-Zionist movement is brave, but small. Much of the traditional left has caved to the doctrines of fear, ethnic supremacy, and violence – all of which permits escalating atrocities of principle and action across the state.

Here is just a sample of the public statements from leading figures in Israeli society, which sum up just how toxic the situation has become.

These are public figures, many on the public payroll, calling for the expulsion, harassment, torture and murder of civilians purely because of the ethnic group to which they belong. In fact, in March of this year, the current Chief Rabbi of Israel said in a sermon:

According to Jewish law, gentiles (non-Jews) should not live in the Land of Israel

If a gentile does not agree to take on the seven Noahide Laws, we should send him to Saudi Arabia. When the true and complete redemption arrives, that is what we will do.

Danny Danon, Israel’s ambassador to the UN, was one of the government figures responsible for inciting the 2012 Tel Aviv race riots. Whipping up the crowd into a hateful frenzy, he said:

The infiltrators are a national plague and we must deport them immediately before it’s too late – the Sudanese can go back to Sudan and the rest should be deported to other countries in Africa and Eastern Europe… the State of Israel is engaged in a war against an enemy state composed of infiltrators and located within Israel. Its capital is south Tel Aviv. ‘Deportation Now’ is the only solution.

Israel is not a democracy. Not for non-Jewish citizens. Not for non-white Jewish citizens. And not for anti-Zionist Jewish citizens. Democracy is about more than a vote or a parliament. It is about equal rights and responsibilities for all citizens, regardless of ethnicity, religion or political views. A country that runs a segregation system, codified in law and enforced by its military, has no right to call itself a democracy. Worse, the sort of culture that a state must create to have citizens support such policies is the grim road to fascism. Veteran Israeli journalist Gideon Levy wrote at the end of 2015:

It was the year that heralded the start of blatant and unapologetic Israeli fascism. One could not say that before. But a year after Operation Protective Edge, a year in which citizens feared to protest, the fruit ripened. The battle for the regime was abandoned without a fight. It is still in full swing, but the results are in; there is no one left to stop the downward slide.

Israel’s greatest threat is not and has never been the Palestinians. The greatest threat to Israel is Zionism, and the rising fascism promoted by an ideology which says Jewish people alone have the right to live in freedom, peace and dignity in a land which has been a melting pot of several religions and ethnicities for thousands of years.

In order to preserve itself as a Jewish state, Israel must import Jews and exile non-Jews – and such conditions make democracy impossible. The answer is not further ethnic cleansing, violence and segregation. It is one state, where all citizens are treated equally under the law, regardless of their ethnicity, faith, or political views.