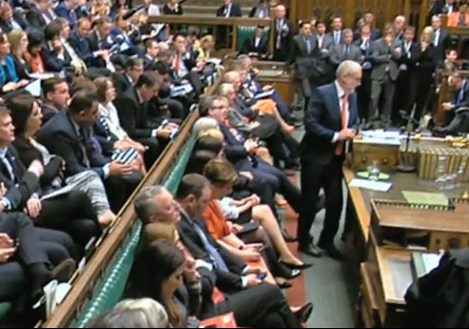 Labour have once again demonstrated a strong stance against Conservative policies that promote inequality, in favour of collective action – by launching a campaign against yet another increase in tuition fees.

This action comes after the abolition of maintenance grants for lower income students last year which, according to George Osborne, were “unaffordable”. Combined with another rise in tuition fees, this latest overhaul of student finance means that all higher education is now fully dependent on the condition that one takes out a huge loan on entering adulthood.

The petition, accompanied by the hashtag #ToryPriceTag, has been signed by more than 65,000 people so far. Labour have shared it on social media with a video of leader Jeremy Corbyn taking the Conservatives to task over the issue in the House of Commons.

I want to make it clear to the Prime Minister that he will not get any support from these benches on raising tuition fees. This government is penalising students…

After a letter from George Osborne to a young woman in 2003 surfaced this week in which he stated that “we will scrap tuition fees altogether when we are next in Government” and “education will once again be free for students”, the Labour leader had the opportunity to highlight the hypocrisy of the Conservatives using their own words:

This is a tax on learning, as the Chancellor of the Exchequer called it in 2003, from a government that cut taxes on capital gains. What message does that send about the economy they want to create? That wealth generates more wealth with minimal tax, that effort and hard work lands you in a lifetime of debt with no support while you’re making that effort. What an insult to the aspirations of young people wanting an education.

In the letter, Osborne also notes that when he went to university, his education was free. Ironically, only people with a family as wealthy as Osborne’s could comfortably be saddled with the tens of thousands of pounds worth of debt that he and his many similarly wealthy colleagues are now forcing on far poorer people.

This move not only penalises the general public in real terms – and in particular, working class would-be students – but also shows contempt for democracy and the public will. Some of the most fierce outcries and protests have been based on tuition fee hikes by the Tories. All the while, they have repeatedly cut corporation tax and capital gains taxes because of fears of the ‘flight‘ phenomenon and the promise of ‘wealth creation‘.

The government are clearly not worried that the general public or students might flee the country to study elsewhere; they know they cannot afford to. This is a weak and cowardly display of favouritism and capitulation to wealth and power at the expense of everyone else. Especially the poorest in society.

If the Tories are serious about their social mobility buzzwords and the sentiment that they want to help everyone to ‘get on’ by working hard, they should remove the systematic obstacles in the way of the majority, and cease favouring the wealth hoarding minority.

Sign the #ToryPriceTag petition against the tuition fee hike

Write to your MP about the Conservatives unequal tax policies