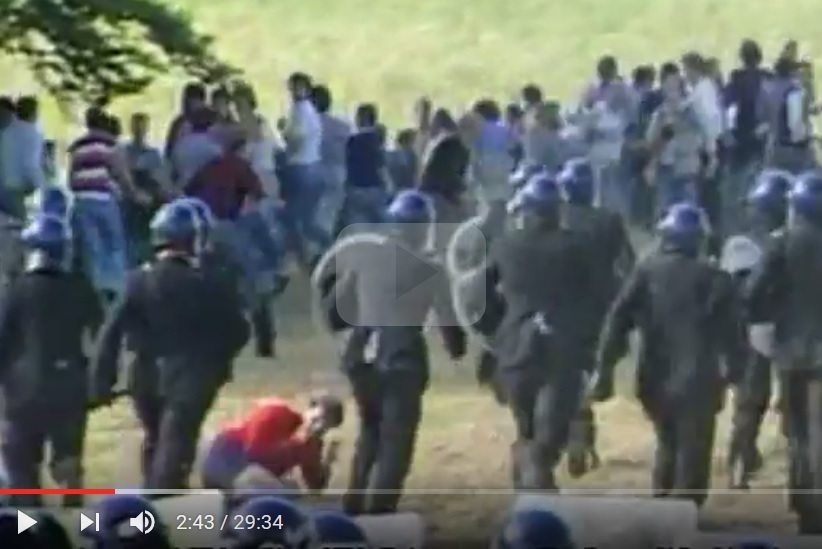 On 26 April, the 96 people who died at Hillsborough in 1989 were judged to have been killed unlawfully. Their families were finally free from the lies that followed the disaster. But South Yorkshire Police is not out of the woods yet. It could now face increased scrutiny over another cover-up case – the infamous battle of Orgreave.

No justice for miners

Former and current mining communities in Britain will remember just how polarising the 1984-85 miners’ strike was – not least because then Prime Minister Margaret Thatcher considered striking miners to be “the enemy within”. But few events were as controversial as the battle of Orgreave.

On 18 June 1984, miners were picketing the Orgreave coking plant as part of their fight against pit closures when a confrontation with police officers broke out. Ken Capstick, a former coal miner and former Vice-President of the Yorkshire National Union of Miners who was at Orgreave, says:

The battle of Orgreave was a one-sided contest, as miners suddenly found themselves facing not a police force, but a paramilitary force dressed in riot gear, wielding long truncheons, with strategically placed officers with dogs, and a cavalry charge reminiscent of a medieval battleground… when the ranks of police suddenly opened up and launched the charge on horseback, it felt like civil war… Many miners were caught and battered to the ground with truncheons, then outnumbered by police on foot before being roughly handled as they were arrested.

Dozens of people were injured and more than 90 were arrested.

In 2012, the Independent Police Complaints Commission (IPCC) was placed under pressure to investigate South Yorkshire Police involvement in sending false or misleading statements to court after a BBC documentary took a new look at the battle of Orgreave.

But three years later, Owen Jones wrote about how the IPCC had decided against an investigation because the battle had happened so long ago. This was in spite of the fact that, as Jones outlined:

Hillsborough as a turning point

On 17 May 2016, Theresa May told the Police Federation’s annual conference that the Hillsborough disaster should be a “touchstone” for all police actions, saying:

due process was obstructed and the police, the custodians of justice, failed to put justice first… We must never underestimate how the poison of decades-old misdeeds seeps down through the years and is just as toxic today as it was then.

In light of these comments, and the fact that the same officers linked to the Hillsborough cover-up have also been linked to the battle of Orgreave five years earlier, there is more than enough cause to reopen investigations into police treatment of striking miners.

The Hillsborough disaster was judged this year, after almost three decades, to have represented a “catalogue of failings” by the police and ambulance services that contributed to their deaths. And Liverpool football fans – insulted by both the media and the British justice system for so long – were officially absolved of any blame for the event.

To those of us involved in the miners’ strike in south Yorkshire in the 1980s, the so-called “battle of Orgreave” and Britain’s worst football disaster have always been linked… What happened at Orgreave was not a human tragedy on the same scale as Hillsborough. But now, thanks to the tremendous campaign by the Hillsborough families who lost loved ones, and who refused to give up their fight for justice, we have the chance to discover the truth about what happened at Orgreave too.

Interim Chief Constable of South Yorkshire Police Dave Jones has now said that the Hillsborough verdict has opened the path to “explore the circumstances of such significant events” and that he would:

A Home Office spokesperson says that Theresa May is currently “considering” a request from the Orgreave Truth and Justice Campaign (OTJC) to open up police archives on the 1984 clashes, and that she will “set out the government’s position in due course”.

There is a stack of evidence that the police narrative regarding the battle of Orgreave was not true, and that there was a cover-up aimed at protecting officers and discrediting striking miners. The sooner an inquiry is opened, the sooner the healing can begin.

See the 2012 BBC documentary below:

– Use this template and write to Theresa May.