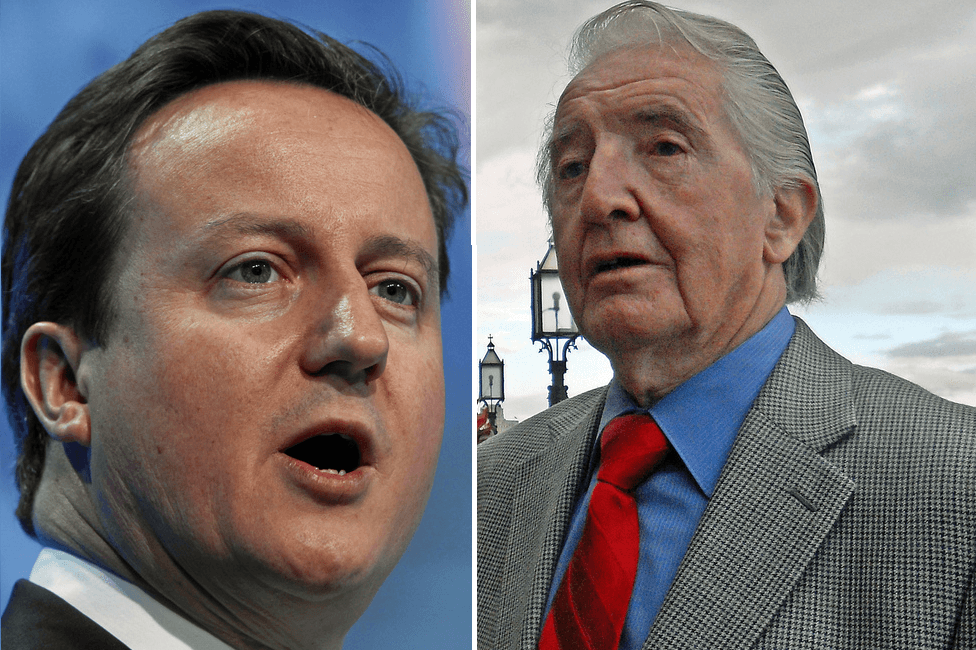 Veteran Labour MP Dennis Skinner interrupted the state opening of parliament on Wednesday with a crack at David Cameron. He shouted:

Hands off the BBC!

The Bolsover MP’s heckle, bringing cross-bench cheers, was a protest against the Prime Minister squeezing and interfering with Britain’s public service broadcaster. The Independent summarises the recently announced cuts:

– The BBC’s popular online News Magazine that focuses on longer news and lifestyle features will close.

– Digital radio social media activity and additional programme content that is not core to services will be cut back.

–  iWonder, a site which answers people’s questions about a range of subjects, will also shut as will the BBC Radio One’s Newsbeat site with its output integrated into BBC News Online.

– Travel news will still be available online but the Travel site will close and development halted of the BBC Travel app.

On top of this the BBC’s Food website will close.

Cameron also wants a tighter grip on the BBC. As The Canary previously reported:

Cameron wants to replace the BBC Trust – the body that governs and regulates the corporation – with a new unitary board. At least half of the board members would be handpicked by the government, including the chair and deputy.

Government ministers already advise on who should join the BBC Trust and successful candidates are appointed by the monarch. So the more significant change may be the new role the unitary board will have at the BBC. Unlike the Trust, this board would make day-to-day decisions at the BBC, including surrounding news coverage.

The government should not be choosing who runs the BBC, especially on a day-to-day basis. It is supposed to be independent and impartial.

The broadcaster is far from being impartial as it is. Michael Lyons, the former chair of the BBC Trust, blames political pressure for its increasing bias:

I don’t think I’m alone in feeling that the BBC has sought to hedge its bets of late. There have been some quite extraordinary attacks on the elected leader of the Labour party, quite extraordinary. I can understand why people are worried about whether some of the most senior editorial voices in the BBC have lost their impartiality on this.

It seems Cameron’s ‘reforms’ will only exacerbate this.

Each year, Skinner interrupts the anachronistic proceedings to make a joke with a political point. Other than Skinner’s quip, you’ve got a lady in a £1m hat telling ordinary people to ‘live within their means’ and a series of backwards traditions nobody understands. So for many, the veteran MP is the highlight.

Here are a few of his latest, courtesy of The Mirror:

This remark brought a mixture of outright laughter and jeers. But mostly laughter.

Reference to the planned privatisation of Royal Mail.

Much laughter as Dennis points out there are just 11 months to go until the election.

Rituals are extremely dangerous because they cement privilege, and Skinner is spot on to appropriate the proceedings to make important political points.

Let’s not let tradition inhibit our rationality and stop us creating a world that is fair and just for all.

You can sign the Change.org petition to demand a review into the alleged bias of BBC Political Editor Laura Kuenssberg here.