Cameron proves that if he wants Britain to stay in the EU, he needs to shut the f*ck up - Canary 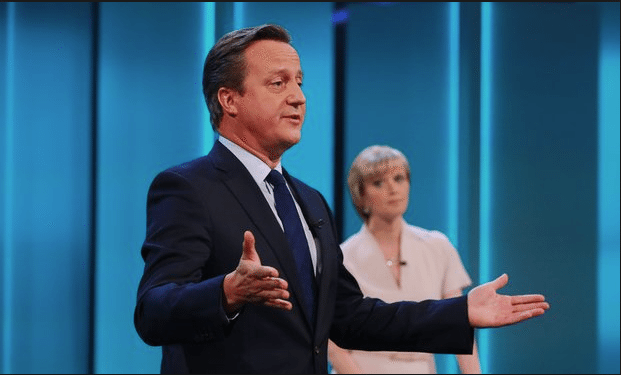 The EU referendum is fast becoming known as the vote that you wish both sides could lose – Farage and Boris in the blue corner, Cameron and Tony Blair in the red.

But as the Tory electoral fraud scandal, the devastating impacts of austerity and last night’s ITV EU referendum debate show, if Cameron truly wants Britain to remain in the EU, he needs to shut the f*ck up.

The Prime Minister made his case for remaining in the EU on ITV last night, but the response across social media suggests if he wants Britain to Remain, then he should remain silent.

Tonight at #ITVEURef I set out a positive and patriotic vision for Britain to remain stronger in Europe. Watch more:https://t.co/KAcpYbNPDE

However ‘positive and patriotic’ the Prime Minister considers his message to be, the British public under the assault of his policies are eager to deliver him a slap in the face by opting for Brexit.

Amazing performance Dave, you have 100% convinced me to vote leave. Thanks

For Guardian readers, the Prime Minister was outperformed by the audience.

Who won that for you? #ITVEURef

And Farage didn’t get on much better either…

When you're on a "charm offensive" but only succeed in being offensive. #ITVEURef pic.twitter.com/U44YuevI1P

Well that was fun. I still hate everyone involved with this. #ITVEURef

So why the hostility?

Is EU membership the number one burning issue for Britons right now? Outside of the right wing of the Tory Party and UKIP – probably not. But the issues brought to the surface by the referendum – trust, democracy, national identity – are firing up an electorate that feels it’s being shafted on all counts.

Working people in Britain have to go back to the interwar period between the two world wars to find a time they had it quite so bad. Zero hours contracts have stripped away most of the job and pay security that was developed over the last half a century – leaving factory, retail, care and hospitality workers with zero working rights.

The Labour Force Survey of 2005 showed that 11% of employers in the UK were operating these schemes.  By 2011 that figure had more than doubled to 23%. This means nigh on one-quarter of all employers are utilising this exploitative method of retaining labour. Now more than 307,000 workers are on ‘zero-hours’ contracts in the social care sector alone.

The Resolution Foundation published a 2013 review of zero-hours contracts which found serious issues of the spike in their use:

These factors have allowed the UK labour market to combine a relatively high level of employment and an unprecedented squeeze on wages in recent years. In short, the government can crow about positive employment figures while the quality of life plummets for working people.

On top of this assault on pay and conditions, has been the assault on in-work benefits. At a time when falling pay means access to housing benefit, child benefit and other in-work state support is more urgent, the government cut it.

One million people are dependent on food banks to eat – so they’re probably a bit tied up with basic survival.

British children are suffering too, fast becoming Cameron’s lost generation. The UK has plummeted to 25th out of 37 developed countries on child poverty, with better conditions for children in Poland and Slovenia.

Elderly people are more afraid of their energy and rent bills than they are of faceless European bureaucrats.

In the UK today, over 90% of all care home provision (up from 61% in 1990) to elderly people is in the independent/private sector after the public sector was encouraged to outsource provision in an effort to cut costs.  The same period has seen an astronomical rise is the cost of care home places.

Today, the average cost of a single room in a care home has risen to over £27,000 a year.  This is higher than the average UK annual wage (£26,000) and more than double the average annual pension income of £13,208.  In fact since 2011, care home costs have risen at twice the rate of inflation, whilst standards of care have slipped.

Local community care services have also been cut, meaning elderly people who used to enjoy the community of sheltered housing schemes will a full time warden, dedciated carers and meal delivery services – no longer have such guarantees.

The consequences of this approach were epitomized by the death in 2013 of  81-year-old Gloria Foster. Mrs Foster suffered a lonely and excruciating death from starvation and thirst after having been left without her essential care for nine days. She is yet another of Britain’s elderly people abandoned in their hour of need, by a government that has taken to shooting its wounded.

The Sick and Disabled

The government’s bogus ‘austerity’ programme has hit sick and disabled people hardest. The cumulative impacts of Universal Credit, the Work Capability Assessments, the Bedroom Tax, and other cuts have taken their toll.

A damning report has linked 590 suicides and 279,000 cases of mental illness to the work capability assessment (WCA) designed by the Department for Work and Pensions, under the remit of Iain Duncan Smith.

The WCA is currently undertaken by private outsourcing firm, Maximus. It is their responsibility to decide whether a disabled person (or someone who has a long-term illness) who is a recipient of benefits, should remain on welfare or have their support cut and be forced into work.

The report, by researchers at Oxford and Liverpool universities, focused on 2010-2013. It claimed the stress of the WCA was the likely cause of 590 suicides and 279,000 cases of mental illness. It was also linked to an additional 725,000 antidepressants that were prescribed. Experts warned that the WCA may have “serious consequences” if people are moved off benefits.

This is all happening while the mainstream media has all but abandoned its role to hold power to account – and that power may have won the general election of 2015 by breaking the law. Even this story is being progressed almost entirely by Channel 4 News, the Mirror and The Canary.

This is what the public sees and hears every time David Cameron takes to the stage to promise a stronger future for Britain in the EU. They see the trail of broken promises from 2005 to 2016, that have made Cameron one of the least popular Prime Ministers since the second world war. If the public cannot trust him on welfare, on workfare, on tax, or even possibly on maintaining the integrity of the electoral system itself – why on earth would we trust him on this?

No. If Dave wants Britain to stay in the EU, he needs to shut the f*ck up.

However you choose to vote in the Eu Referendum, just make sure you place that vote. You can register to vote here.

FOR ALL OUR TOMORROWS! Few hours left till midnight tonight to register for UK/EU vote : PLEASE REGISTER: #whyvote https://t.co/MQAu8rArSA