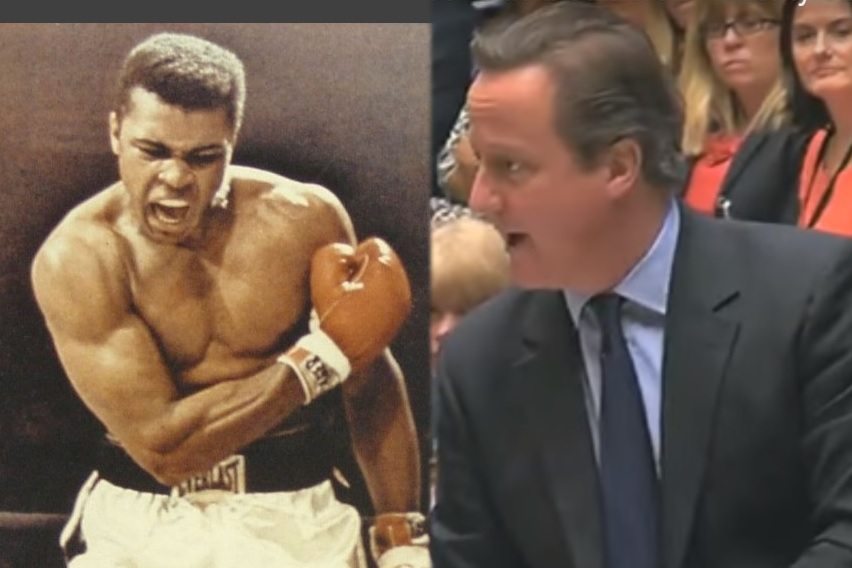 At Prime Minister’s Questions (PMQs) on 8 June, David Cameron quoted the world-renowned and recently-deceased boxer Muhammad Ali. But the truth is that Cameron’s government has very little in common with the great sportsman and activist.

The sound of embarrassed groans and hands hitting foreheads filled the House of Commons when Cameron echoed the famous fighting phrase of Ali, saying:

I’m sure, standing at this despatch box, I’m sure we all try to float like a butterfly and sting like a bee.

After yet another in a long line of embarrassing PMQ contributions, one Twitter user argued that Cameron just “couldn’t resist making a crap joke“. Another described it as “cringeworthy” to watch.

But what was truly cringeworthy was the Prime Minister’s insistence that Ali was:

an enormous role model outside the ring.

While entirely true for many people around the world, the three-time heavyweight boxing champion was clearly not a role model for Cameron and his Tory colleagues.

Ali was a symbol of African-American empowerment from the 1960s onwards. Tutored by Malcolm X after 1962, he was increasingly inspired by the religion of Islam. He officially converted in 1964 and changed his birth name – Cassius Clay – to Muhammad Ali.

The Guardian has described Ali as “a peaceable fighter who needed a reason to fight”. And this became completely clear when he became a conscientious objector in 1966, refusing to enlist in the US army during its invasion of Vietnam. He famously said:

Why should they ask me to put on a uniform and go 10,000 miles from home and drop bombs and bullets on brown people in Vietnam while so-called Negro people in Louisville are treated like dogs and denied simple human rights? … I ain’t got no quarrel with them Viet Cong.

This decision saw him denied boxing licences throughout the USA and stripped of his passport until his conviction was overturned in 1971. After this, he focused his efforts on humanitarian causes, declaring in particular his support for the Palestinian struggle against Israeli occupation.

It doesn’t matter what religion you are, if you’re a good person you’ll receive God’s blessing.

David Cameron’s Conservative party, on the other hand, appears to be quite at odds with many of Ali’s causes. In particular, the government has attacked Britain’s Muslim communities on numerous occasions – something Ali would surely have been opposed to.

In January 2016, Cameron stigmatised Muslim women by announcing plans to force them to learn English or be deported. At the same time, Communities’ Secretary Eric Pickles sent a letter to 1,000 mosques telling them they had “more work to do” in the fight against terrorism. This was soon slammed as both “ridiculous” and “unhelpful” by critics.

The government’s Prevent strategy, meanwhile, has been criticised for creating an “atmosphere of fear” and branding children as young as nine as potential terrorists.

And most recently, in the run-up to the elections for Mayor of London, the Prime Minister supported the race-baiting crusade launched by millionaire Zac Goldsmith, the Conservative competitor of London’s current Mayor, Sadiq Khan. Cameron had insisted that Khan had frequently “appeared on a platform” with a Daesh (Isis/Isil) supporter. This man, who had actually supported the Tory candidate who stood against Sadiq Khan in the 2015 general election and shared platforms with numerous Conservatives, soon stressed his firm opposition to Daesh. Cameron was later forced to backtrack over his comments.

lost us the election, our reputation and credibility on issues of race and religion.

In spite of recent evidence showing its own problem with “endemic racism”, the Conservative party has also helped to fuel a slanderous campaign in recent weeks aimed at silencing critics of Israeli crimes and weakening its Labour party opponents in the process.

In light of Labour’s own inquiries into possible antisemitism in the party, the Muslim Council of Britain (MCB), the country’s largest Muslim representative organisation, has called for:

an urgent review of Islamophobia in the Conservative Party.

Just as the Labour Party is rightly conducting an inquiry into antisemitism, it is important for the Conservative Party to reflect upon the extent of Islamophobia in its own ranks. We should have zero tolerance for both antisemitism and Islamophobia… We urge the Conservative Party to reflect and learn from this disreputable period of campaigning [in the London mayoral elections]

Considering that Ali was such an ‘enormous role model’, maybe the Conservatives should now take a leaf out of his book.

See Cameron’s comments and the whole of PMQs here:

See other Canary articles on Islamophobia, PMQs, and David Cameron.