Labour MP throws a tantrum live on the BBC, because Corbyn might actually win the next election (VIDEO) - Canary 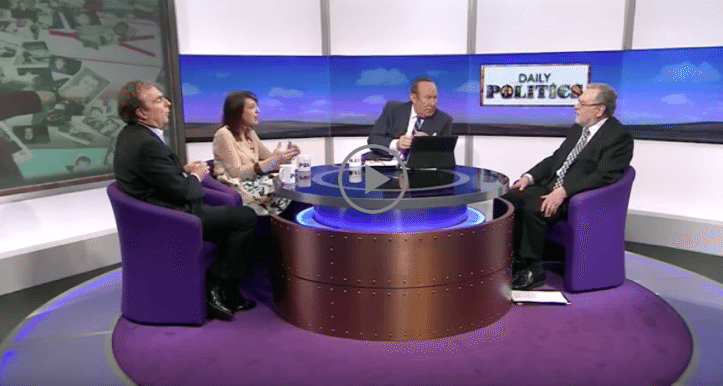 Labour MP John Spellar recently appeared on the BBC’s Daily Politics programme, and launched into a breathtaking rant about the party membership and voters – who are now all to the left of him. Dismissing the membership as “Trots” – Spellar revealed the utter contempt with which the Blairite ring of the Parliamentary Labour Party holds their 380,000 members and millions of voters.

The embarrassing episode began with Conservative columnist and thinker Peter Hitchens telling the Labour MP for Warley in the West Midlands:

“You belong to a party which became Blairite, and Blairism has gone now.

Spellar fires back that Hitchens “sounds like a member of Momentum” (a grassroots Labour movement).

Guardian columnist Zoe Williams challenges Spellar for “using ‘member of Momentum’ like an insult'”, reminding Spellar that these are people who have joined his own party. Spellar retorts:

“Yeah from the Greens, from the Socialist Workers, and the Alliance of Worker’s Liberty and all the other Trots”

Williams cuts Spellar off at this point and delivers some home truths that it might be worth repeating to the Blairite community as a whole:

“The PLP at some point has to stop talking about the membership of the party with scorn and disdain.” she says.

“Whatever you think of them, they are your party. So, you either make your peace with them, or you leave. You can’t come on television and talk about them as though they’re lunatics.”

Spellar is Labour MP for Warley in the West Midlands. He attended the fee-paying public school Dulwich College, also attended by UKIP-leader Nigel Farage. Later, Spellar graduated from St Edmunds College at the University of Oxford. After a short period as a Trade Union official, Spellar entered parliament in 1982 and saw his career accelerate under Tony Blair. Blair gave Spellar several ministerial positions in Defence, Trade, Transport, and the Privy Council – even bringing him into the cabinet.

So you can imagine Spellar’s displeasure at the party moving away from the Blair-era, in a new and progressive direction. It’s not the first time he’s embarrassed himself and the party with such outbursts either. In November 2015, he demanded Corbyn resign for refusing to back a new war in Syria, saying:

How does Jeremy Corbyn and his tiny band of Trots in the bunker think they’ve got the unique view on it all? If anyone should resign after this incident, it should be Jeremy Corbyn”

Spellar and the Blairite fringe of the party are attempting to redefine the democratic change of voice in the Labour party as a coup. To do so, they have to ignore several very inconvenient truths.

In short, the left has found a progressive voice that is resonating with people outside the Westminster political and media bubble – and not a moment too soon. Those inside the bubble are now simply freaking out.