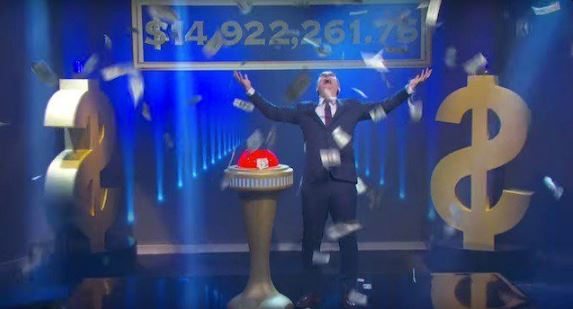 British comic John Oliver has made a huge name for himself in the US via his comedy news vehicle Last Week Tonight. He is one of a handful of media personalities who has perfected the art of the ‘epic rant’ via his weekly news segments that skewer political banality and absurdity with comedy. This week, he turned his attention toward both the US healthcare system and predatory debt collectors and, as a result, transformed the lives of a group of US citizens.

In undoubtedly the most spectacular demonstration of the inner-workings of the debt recovery industry and the US healthcare system, Oliver outlined how “disturbingly easy” it was to set up a debt recovery company and buy $15m worth of Americans’ medical debts. His Central Asset Recovery Professionals Inc. (or CARP, after “the bottom-feeding fish”) then teamed up with the debt relief charity RIP Medical Debt, and forgave the entire amount on national television.

CARP didn’t even have to find debts to buy. The ‘portfolio’ was offered to them once they had set up their website, offered for less than a cent on the dollar; the company bought the entire $15m debt for roughly $60,000.

Last Week Tonight demonstrates the power of art, comedy in particular, to make a political impact. Not simply in the specific act of forgiving individuals’ debt, but more generally as a way to teach people about things that often appear too complicated for the average citizen to understand. Economics, for example, is cloaked in jargon and esoteric language. This deliberately over complicated wording makes it difficult for the general public to follow. As The New York Times pointed out, in response to Oliver’s stunt:

Here's our piece on the Debt Buying industry from last night. Your move, Oprah… https://t.co/yhZfbCuY5f

The revelations in Last Week Tonight’s debt segment illustrate how incompatible the insurance industry and the healthcare industry are. It’s been argued, though the exact number is contested, that 643,000 Americans are bankrupted by their medical bills every year.

Even having medical insurance does not exempt you from huge payouts, and often “fails as a safety net” leaving even those who can afford to pay a monthly premium with “crushing” medical debt. Forbes magazine reports:

A study done at Harvard University indicates that this is the biggest cause of bankruptcy, representing 62% of all personal bankruptcies. One of the interesting caveats of this study shows that 78% of filers had some form of health insurance, thus bucking the myth that medical bills affect only the uninsured.

Even those with relatively small debts, not usually associated with bankruptcy, suffer because of the predatory way these industries work:

About 13% of medical debt bankruptcies involve amounts over $10,000. Although these debts are not extreme, the medical bill collection process is infamous for resisting implementing reasonable repayment plans. Consequently, filing bankruptcy is the only way many patients owing money on their medical bills can stop debt collectors from harassing them.

This provides concrete evidence against our government’s relaxed attitude toward the privatisation of the NHS. Without significant government intervention and regulation, which the NHS has benefited from since its inception, this is what the future of our healthcare system could look like. Not only is the NHS currently facing threats from TTIP and government privatisation, but also from interventions imposed by ministers who don’t understand the implications of the choices they are making, as demonstrated by Hunt’s behaviour during the doctor’s strike.

The NHS has its problems, but it’s something that we must actively fight for. It will be significantly easier than fighting to have thousands of pounds of individual Britons’ debt forgiven by well-intentioned comedians.

Join one of your local NHS campaign groups – there are plenty of them!

Read The Canary’s articles about the NHS.

Read The Canary’s stories about TTIP.

Support The Canary so we can continue holding power to account.