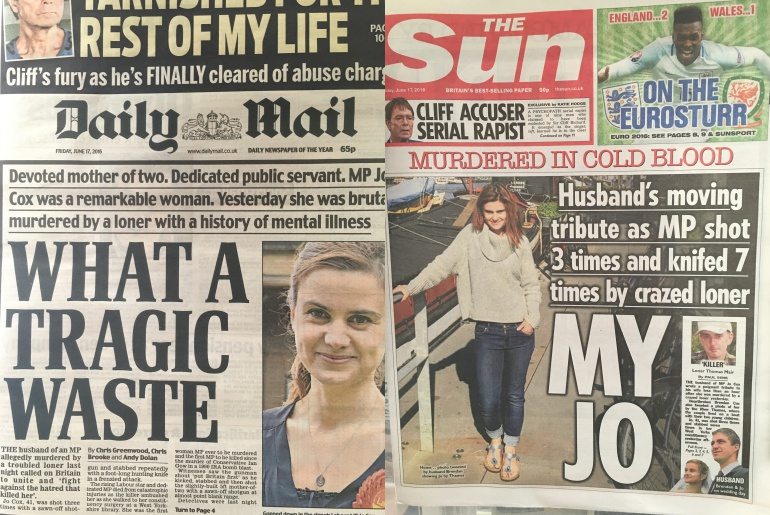 The murder of Jo Cox has left people stunned and shocked. Whenever events such as this occur people try and find ways of understanding what has happened.

There seems to be a need to not only attempt to comprehend, but to pinpoint blame. And in this instance, part of the blame is being directed at his mental health.

This pinpointing inevitably leads to scapegoating and tarring whole communities with one big sweeping brush. In recent years, this has generally been the Muslim community who have been asked to justify their whole existence based on the extreme acts of a few.

However, this atrocious act was carried out by Thomas Mair, a white man, with links to the far-right. And while the media are mentioning these links, it is has been given nowhere near the prominence it would have been had if he had been a jihadi.

Instead, papers such as the Daily Mail and The Sun have lead with headlines which claim “murdered by a loner with a history of mental illness”, and in the case of The Sun, “Husband’s moving tribute as MP shot 3 times and knifed 7 times by crazed loner.”

The facts about Thomas Mair

Herein lies the first problem. Simply that not much is known. And the few nuggets that have been gleaned are blown up into ridiculous proportions. Neighbours described him as a “loner”- which has a myriad of meanings, one being he simply didn’t like his neighbours much and didn’t speak to them. Being a loner does not necessarily relate to having mental health problems – although it can be –  but the two have been placed together as if they are intrinsically linked.

Then there’s the history of “mental health problems”. According to Mind, one in four people experience mental health problems in a year. These issues range from depression and anxiety, to eating disorders, and phobias to conditions such as schizophrenia which can cause psychosis.

In the case of Mair, there is no evidence whatsoever of what mental health problems he was experiencing at the time of the murder. His brother has spoken of “a history of mental illness”, but again that tells us nothing. Furthermore, the main facts about his mental health come from one newspaper report that contains evidence not only of management and recovery but of being able to be articulate about his mental health:

I can honestly say it has done me more good than all the psychotherapy and medication in the world. Many people who suffer from mental illness are socially isolated and disconnected from society, feelings of worthlessness are also common mainly caused by long-term unemployment. All these problems are alleviated by doing voluntary work. Getting out of the house and meeting new people is a good thing, but more important in my view is doing physically demanding and useful labour.

Mental health is fluid. It is quite possible that Mair might have had a massive relapse or been triggered in some way. It is possible his mental health played a part in the killing of Jo Cox. However, the point is we don’t know, and the evidence that he was a “crazed loner” just isn’t there.

Unfortunately, all these headlines do is demonise the millions of people who do have mental health problems, and who rely on psychotherapy and medication. As Time to Change point out, those with mental illness are far more of a risk to themselves than anyone else, and that:

The majority of violent crimes and homicides are committed by people who do not have mental health problems.

Using words like “crazed” and using the fact someone has had “medication and psychotherapy” in such a loaded way does nothing to help people who are struggling with their mental health. In fact, not only does it not help, it makes things harder. It makes people afraid of their mental health, less likely to get help, more likely to feel stigmatised by the thoughts and feelings they are experiencing.

Rather than focussing on whatever mental health problems Mair may or may not have, the press would be better off looking at the context in which this murder took place – a context they have been responsible for propagating.

Cox was pro-immigration and diversity. She was a Remain supporter. These may or may not be the reasons she was murdered – but if the reports are right that he shouted “Britain First” or “Put Britain First”, and given his links to the far-right, there has to be an examination into the political climate which could have triggered the attack.

The referendum debate has been tarnished by lies and racism. Only last week Britain First called for “a direct action campaign against Muslim elected officials, at all levels of politics”. Two weeks ago, Nigel Farage threatened violence if the referendum was lost. The day of the murder, Farage proudly released this disgusting poster. And all of this has been lapped up by right wing politicians and, moreover, the right wing press – who have echoed this racism and made it acceptable on their front pages.

Again, we cannot read what is going on in Mair’s head, so this is speculation. But the climate of fear and hatred which is currently being propagated has to be examined. And it certainly has more substance than the current claims about his mental health.

Meanwhile, there are claims that Britain First should be proscribed as a terrorist organisation, questions raised about why the police aren’t monitoring the far-right. The police do monitor the far-right. The domestic extremism unit has a category of XRW (Extreme Right Wing). Britain First are a nasty, horrible organisation who should be condemned. But proscribing them as a terrorist organisation is equally not the answer. Begging the government to clamp down on our civil liberties will only play into their hands in increasing the Prevent strategy and pushing through the extremism bill.

It’s time to stop the kneejerk reactions. It’s time to accept we can be saddened and shocked by something without immediately jumping to conclusions and finding a scapegoat.

But equally, we need to examine the climate of increased racism we are currently living in, and to question the assumptions that are being made every day.

Ultimately, we have to look at the sort of society we want to a part of – and whether that is one that gives careful consideration to serious issues rather than yelling “crazed loner” and stigmatising millions of people.

Visit the Mind or Time to Change websites for more information about mental health issues and reducing stigma.

If you are having a mental health crisis, you can contact The Samaritans for 24-hour support.

The Free Psychotherapy Network offers free or low-cost therapy to those on low incomes or benefits.

Get involved in promoting inclusion and tolerance rather than hate.