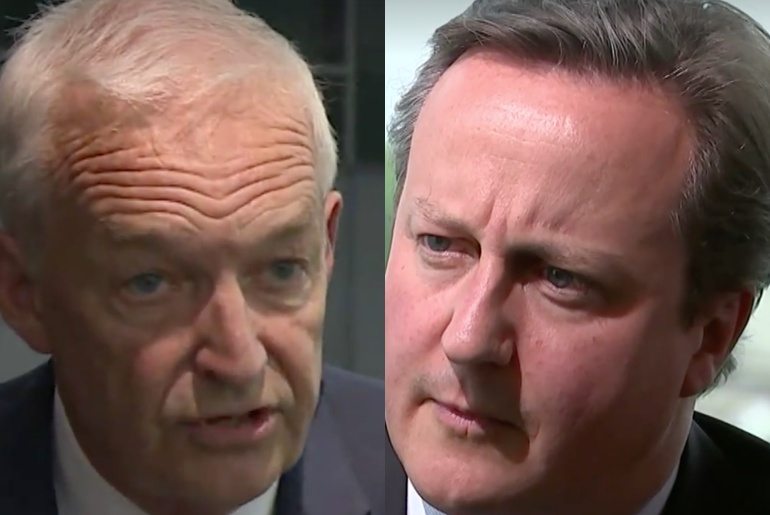 For the first time since the election expenses scandal broke on Channel 4 News in January, Jon Snow got a chance to put the allegations to the Prime Minister.

The Conservative Party has come under increasing pressure regarding their alleged overspending at elections over several issues, with 18 police forces investigating potential fraud and 31 MPs implicated. The original Channel 4 investigation focused on 3 by-elections in Kent – Rochester and Strood, Clacton-on-Sea, and Newark-upon-Trent where £100,000 of hotel bookings had not been declared.

There were further allegations that the Tories broke the law fighting off Nigel Farage in South Thanet. Investigations have revealed that undeclared expenses would have taken MP, Craig MacKinlay, £18,973 over the spending limit. Kent police have now been granted an extension to investigate these claims – but not before the Conservative party sent a barrister to Kent to unsuccessfully oppose the application.

Following this, there were revelations that the Tories had overspent on their battle bus campaign – with 24 MPs under investigation for not declaring associated costs.

The Canary has also been carrying out its own investigations into electoral fraud with evidence from a whistleblower that the Tories conducted misleading surveys. Those paid to carry out the surveys were allegedly instructed not to reveal that they were, in fact, working for the Conservative party. Again, there are questions over whether this spending was, or should have been, declared on their spending returns.

The last time Jon Snow tried to interview MPs about electoral fraud, he was left with nine empty chairs as none of the accused could face turning up to answer his questions. However finally, after five months, Channel 4 were able to put some of their questions to David Cameron. And it did not go well for the Prime Minister.

Having questioned Cameron over the referendum, Snow turned to the election expenses, asking:

Why have you been prepared to spend money on a QC to try and stop the police investigating what we have revealed?

Well, we haven’t been doing that, what we are doing is we are co-operating with a…

Snow immediately interrupted to challenge him:

You have a QC in the Thanet South constituency, in the court, actually asking the court to stop the investigation.

When Cameron tried to come up with more waffle, Snow hammered the point home:

You went to court to ask the court not to allow the police an extension to go on investigating these abuses.

To which Cameron responded in direct contradiction to his first answer:

Cameron then claimed that he was “very happy for the Electoral Commission to examine all of this” to which Snow immediately asked:

Well why get a QC to stop it then?

Yet again, the Prime Minister had no answer to give, and floundered saying:

Well, that was in one particular seat.

He then reiterated he was “happy” there was now time for the allegations to be investigations and that “they had all the paperwork to examine this”.

This was a another contentious issue as Snow interrupted Cameron again:

They have got the paperwork, but Prime Minister, with respect, the Electoral Commission had to go to court to wring the papers out of you.

Cameron denied this was the case, and Snow reiterated the point:

You were three days overdue and they had to go to court.

The Prime Minister then went from saying “they didn’t have to go to court” to saying that in their view it was “unnecessary” which is hardly the same point. This is especially pertinent given the judgement in the South Thanet case refers to the fact that the party failed “to provide complete and timely disclosure of relevant material such that application had to be made to the High Court”.

Knowing he was onto a losing article, Cameron resorted to:

But anyway there’s no point having a spat about this now.

Which led Snow to accuse Cameron of not taking the accusations “seriously” and that:

There are 31 seats, that you under-declared, and in some cases by tens of thousands of pounds, hotel costs which were never figured in the local inventory.

Cameron repeated the much touted rhetoric that it the battles expenses were “national expenses”. Having not been able to give a clear, consistent or truthful answer to any of the questions up to this point, he then confusingly claimed:

I don’t think there are any questions that anyone is asking that we can’t answer.

Snow then nailed him with the judgement from the application for the extension to investigate the offences:

The judge said that Channel 4 news allegations indicate the potential for offences committed in a significant number of constituencies on an unprecedented scale. This is scandal of very large proportions.

Instead of giving a straight answer, Cameron attempted to see how many times he could put the word “national” into one reply:

Cameron was then asked about his own majority being in “serious danger” if any of the allegations were proved. However, instead of answering the question, he chose to sneer at the investigation:

As I say look, it’s a Channel 4 investigation. I know that you’re proud of the work you’ve done. We’re very happy we’re answering all of the questions. I think you’re making quite a large mountain out of what I think is a relatively straightforward…

So you disagree with the judge then?

To which Cameron responded:

No, no. I think it is a relatively straightforward set of questions that we have to answer.

Well, Cameron, evidently you do disagree with the judge given the judgement clearly states that given the number of overlapping accusations the case is “complex and time consuming”.

Despite his assertions, it is very clear Cameron is able to give anything but a straight answer to these allegations of election fraud. Just the act of sending a barrister to attempt to obstruct the police investigation in South Thanet is an example of how worried is he is – and no number of glib replies can cover this.

Given the small majority the Conservatives have, this scandal has the real potential of costing them power. It is essential that these offences are investigated properly to ensure they haven’t been governing and imposing their mandate of austerity through fraud and false accounting.

– Read other coverage in The Canary about the election expenses scandal.

– Use The Mirror’s ‘People’s Electoral Commission‘ to help investigate alleged Conservative election fraud.
– You can report any concerns you have about electoral fraud anonymously here.