These hackers are making cycling easier for everyone (VIDEO) - Canary 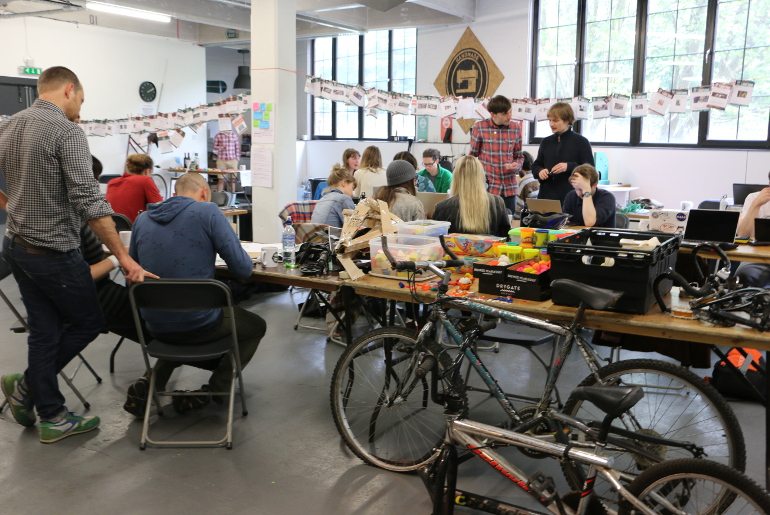 Have you ever tried to ride a bicycle wearing a skirt? Two years ago, in the first edition of CycleHack, a contributor offered a simple solution to this everyday problem by using a coin and a rubber band. The video that shows how to do it, called Penny in Yo’ Pants, went viral and has more than 3.6 million views to date.

CycleHack is a worldwide movement that aims to empower “individuals, organisations and governments to collaborate, share skills and prototype new ideas around cycling”.

To overcome barriers that can put people off cycling, CycleHack participants get together and share their ideas or “cyclehacks”, as they are called. While some of these hacks address pervasive cycling issues, like the aforementioned Penny In Yo’ Pants, others offer solutions to local problems, which can vary greatly across different cities and countries.

Cyclehacks come in all flavours: an old handlebar that becomes a bicycle parking rack, road warning sides that remind drivers that cyclists may be passing by as they open their car doors, an IKEA candle holder hacked into a rear-view mirror or a smartphone app to call for help for bike repairs. These, and many other examples, can be found in the open source catalogue at the CycleHack website.

The goal is to share knowledge and make cycling more pleasant and accessible. As Sarah Drummond, one of the three co-founders of the project, stated to The Guardian:

It’s not a competition and there’s no money at the end of it. CycleHack is about collaborating to develop new ideas

The movement started in Glasgow in 2014, but it’s rapidly growing and spreading all over the world. This year’s global event will take place simultaneously in 35 cities on all five continents, from 24 to 26 June.

In fact, anyone can run a CycleHack in their own city following some simple steps. The original team keeps a centralised website with information about all the venues and with an open source catalogue where the hacks from all the events are uploaded.

Participants in the CycleHack events will be tweeting using the hashtag #cyclehack. Stay tuned for great ideas.