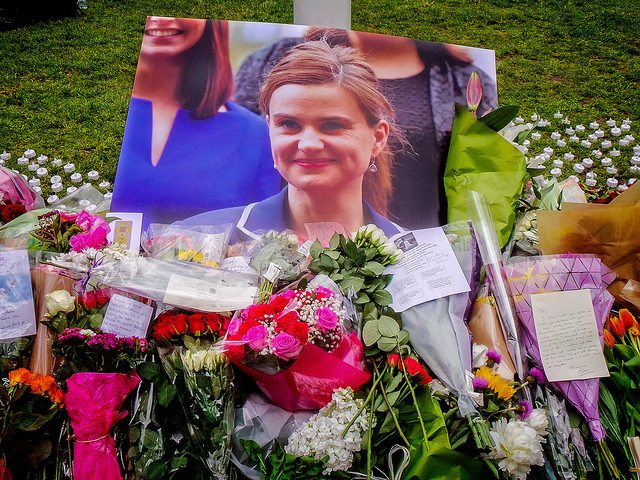 The far-right has just sunk to a new low in Jo Cox’s former constituency – as a fringe political party says it will contest the by-election in Batley and Spen, West Yorkshire.

Liberty GB, which describes itself as “Aiming for cultural renaissance, promoting conservative values, culturist policies & self determination” announced on 18 June it would be contesting the seat. The by-election comes in the wake of Jo Cox’s killing last week, allegedly by Thomas Mair. Mr Mair, 52, faces charges of murder, grievous bodily harm, possession of a firearm with intent to commit an indictable offence and possession of an offensive weapon.

All major political parties have said they will not contest the by-election, out of respect to the late Mrs Cox. Liberty GB, however, appears to think it appropriate to run a candidate. It will be their press officer, Jack Buckby.

In a statement, Buckby said:

Too much is at stake to allow Labour to retake Batley and Spen unchallenged. The constituency is part of a region that has been turned upside-down by mass immigration, with mosques sprouting like triffids, Islamic extremism proliferating, child-rape gangs still on the loose, and long-standing English communities under threat of demographic eradication.

According to the 2011 census Yorkshire and the Humber, the region in which West Yorkshire falls, was made up of 464,691 people who were born outside of the UK. This represented less than 9% of the population. The region came 6th out of nine UK regions for the level of the foreign-born population. The definition of mass as an adjective, in case Mr Buckby is reading, is “involving or affecting large numbers of people or things”. Note the word “large”, then juxtapose it with “less than 9%”.

“Mosques sprouting like triffids”. As of 2015, there were 1,834 Mosques in the UK. Compare this to 50,660 churches and it is unclear whether Mr Buckby has actually seen the film The Day of the Triffids – or his interpretation of “sprouting” is not the Oxford English Dictionary one.

Polemical claims such as “Islamic extremism proliferating” and “child-rape gangs still on the loose” are completely unquantifiable and wholly inflammatory. Unless Jack would like to give evidence to the Child Sexual Abuse Inquiry, which will be looking into allegations of systematic rape and abuse by mostly white, establishment men.

The statement “demographic eradication” is also perplexing. Mr Buckby and Liberty GB make it unclear whether by eradication they mean that these “long-standing English communities” should be just made up of white people or white people and ethnic minorities, or not – as the latter would better-relate to “long-standing”.

The Labour Party has blood on its hands. And by shutting down debate and labelling working class people concerned about their communities as racists, they risk driving desperate, disenfranchised people to further horrendous acts like this.

Accusing the Labour party of having “blood on its hands” after one of its own MPs was repeatedly shot and stabbed in the street two days prior is staggeringly distasteful and deeply unpleasant. But then this is unsurprising, as Buckby was a former member of the now-defunct British National Party (BNP) and made this similar statement about the Orlando massacre:

He also formed an organisation called the “National Culturists” which he told Vice was owing to the fact he:

saw the gap there and I got talking with John Press – the founder of the Brooklyn Tea Party, who wrote the book Culturism. I decided we needed to be the first ones to do it, but since then different nationalists have been picking up on the word, which is quite good.

“Culturism”, just to be clear, is in essence the opposite of “multiculturalism”. In layman’s terms, it’s fundamentally dressing-up racism and xenophobia with a veneer of academic sheen. This becomes blatantly obvious from Liberty GB’s website. The Statement of Ideology says that:

Liberty GB’s ideas and ideals override the conventional dichotomy (and terminology) of Left and Right, since our essential conservatism and regard for tradition is melded to a drive for modernity in scientific and technological development, and progressivism in areas such as women’s equality and animal welfare.

Liberty GB basically wants the UK to be for “British” people. Or rather whoever they deem to be British. The party’s founder, Paul Weston, is a former Chairman of the British Freedom Party, a short-lived political wing of the English Defence League (EDL); his deputy chair was Tommy Robinson. He stepped down in 2013 to form Liberty GB.

Weston was also a former UKIP candidate in the 2010 General Election, achieving just 664 votes in the Cities Of London & Westminster constituency.

Interestingly, the party released a campaign poster on 13 May giving “three options for Europe”. This has since been deleted. Look familiar? 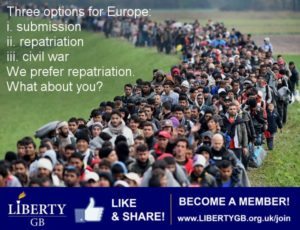 Weston is also the leader of “Patriotic Europeans Against the Islamisation of the West.” Or, as they’re more commonly known, Pegida UK – this country’s wing of the European far-right movement. Pegida are known for their silent marches; at a rally in Birmingham this year, Weston said that “Islam is Nazism incarnate”, and in 2014 he referred to David Cameron as a “traitor”.

But probably the most disturbing aspect of this candidacy by Liberty GB in the Batley and Spen by-election is a Facebook post from 18 June. This post has also been deleted (obviously Liberty GB are unaware of the term “screengrab”).

The image speaks for itself: 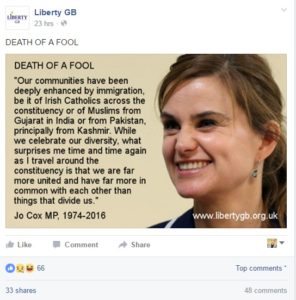 Strip-away the faux-academia, the apparent concern for the “British Public” and the alleged ethics and morality and essentially what you have is the EDL with a PhD. Far-right racism and xenophobia. Nothing more.

The likes of Weston and Buckby can dress their party up all they wish. They are simply deeply-unpleasant, small-minded, distasteful and bigoted men, who think by bombarding the electorate with eloquence and the Oxford English Dictionary, they will fool them.

With their links to the Tea Party in the US, Pegida, the BNP and the EDL, these horrible individuals are not fooling anyone.

And as the Batley and Spen by-election will undoubtedly show, they are certainly not fooling the people of West Yorkshire.

May they crawl back under whatever rock they came from, never to be seen again.