Following Jo Cox's murder, people are focusing on what unites them - The Canary 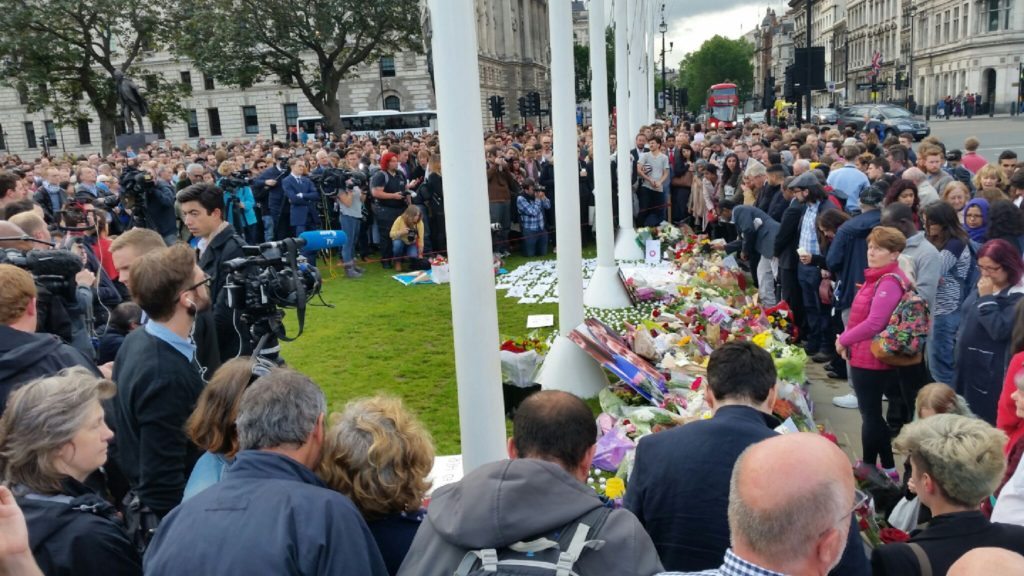 It’s Refugee Week in the UK and the theme is ‘welcome’. The series of events celebrating the rich contribution that migrants and refugees make to the UK falls amid the hysterical ‘invasion’ narratives dominating the media. Between 20 and 26 June, the initiative will aim to promote a deeper understanding of why people seek sanctuary. Held annually to coincide with World Refugee Day on 20 June, it is now an established part of the UK calendar.

With global displacement at an all time high, even the sea has been politicised. In the desperate search for a better life, almost 3,000 people have drowned in the Mediterranean this year. One of the largest charities helping refugees and migrants across Europe, Doctors Without Borders (MSF), has stated it will no longer accept funds from the European Union, in protest at the bloc’s shameful response to the crisis.

Refugee Week began in 1998 as a direct result of media hostility towards refugees and asylum seekers. Never in recent history has it been more vital to deal a counter punch to fascism and dehumanisation of the ‘other’ than it is now, sandwiched between the devastating murder of Labour MP Jo Cox, and Thursday’s EU referendum. The week-long programme of art, cultural and educational events will highlight the massive social, cultural and economic contribution that refugees have made to life in Britain over the last 450 years.

Fear-mongering rhetoric, which has included labelling migrants and refugees as “swarms” and “cockroaches”, began long before the Brexit debacle. Yet the fountain of hatred whipped up by the right-wing press during the last few weeks took propaganda to new extremes. Think of it like the famous ‘builder’s bum’ — you really didn’t want to see it but you did. Most recently, increasingly hostile campaigning has escalated to the point where desperate political posturing has mirrored Nazi propaganda. Is it any surprise that many remain unaware of the difference between an economic migrant and a refugee?

Sadly, it took the appalling atrocity on a West Yorkshire street by someone with links to Neo-Nazi groups, to burst the toxic bubble. Within hours, the media narrative changed. The wicked murder of a mother of two young children, who fought for a better world, triggered the entire country to reflect on its odious nationalism.

Three days before she was killed, Jo Cox implored the public not to “fall for the spin”of the Leave campaign. Writing for PoliticsHome, she acknowledged the benefits Britain has reaped from immigration. At the same time, she argued that the country can do far more to address the impact of immigration while remaining in the EU. Her husband Brendan has also been frank on the subject. Warning that mainstream politicians are focusing on the wrong issues — and obsessing over numbers instead of fairness and order — he accused them of being clueless on immigration.

While the extreme focus is on preventing people coming into Britain, the lengths the country goes to keep people out are barely mentioned. Around 30,000 people a year are detained under Immigration Act powers. Thousands languish under high-security conditions in a network of ten immigration detention centres around the country. Run by the prison service or controversial multinationals such as G4S, most detainees are asylum seekers whose claims are being processed or have been refused. Others may be non-UK citizens who have lived here unlawfully, or breached visas. Detention is the norm rather than the exception and, unlike most other European countries, there is no upper time limit.

Everyone is welcome to participate during Refugee Week. Events hosted by voluntary and statutory organisations, schools, faith groups and individuals will provide a platform for the voices of refugees and migrants. Past activities have included football tournaments, public talks, dance festivals and theatre projects.

Irrespective of belief on whether Britain is stronger in or out of Europe, few would argue that any attempt to counter the negative climate, overcome hostility and create deeper understanding between communities, has never been more essential.

— Find out about Refugee Week events taking place in your area

— Join the campaign to end indefinite detention in the UK

— Take action with Hope not Hate to celebrate an inclusive Britain