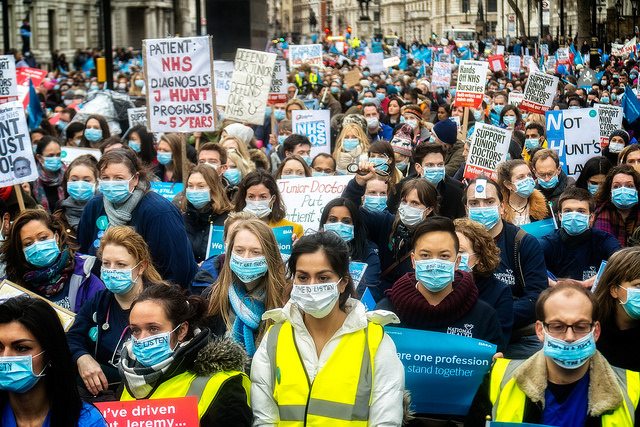 The Tories were thrown into another crisis on Tuesday – as the British Medical Association (BMA) announced it had rejected the proposed junior doctors contract.

In a statement, the BMA said that:

In response to accepting the new terms and conditions, the results are: turnout – 68%; yes – 42%; no – 58%. The results of the referendum will be considered in detail by the junior doctors committee at its next meeting. We understand junior doctors as well as students in their final years, will have questions about how this referendum will impact their current or future working lives. As soon as we are in a position to answer these we will let you know.

I worry that a government that frankly could never be trusted with the NHS, now has every excuse to dismantle it, under-fund it and undermine it. I only hope that the next government realises that this vote is a demonstration of just how appallingly frontline staff have been treated and undermined.

This is a major blow for the Tories, especially an already embattled Jeremy Hunt, who has been repeatedly criticised for his disastrous handling of the negotiations and proposed implementation of the new contract. In April, for the first time in 40-years, junior doctors took unprecedented industrial action against the highly controversial contract – a full 48-hour walkout across all departments.

This situation has been several years in the making, with negotiations originally beginning in 2015, but breaking down repeatedly, and the first stage of industrial action being taken in January of this year. Throughout this process, claim and counterclaim have been leveled by both sides, with the junior doctors accusing the government of “imposing” a contract that was neither safe nor fair.

While progress appeared to have been made after the 48-hour walkout in April, this vote will now see the contract negotiations go back to square one. However, the likelihood now is that Jeremy Hunt may continue with his controversial imposition; that is forcing the contract upon NHS staff. As The Canary previously reported, there are numerous questions surrounding whether Hunt’s position would even be legal.

Speaking exclusively to The Canary, Dr Ben White, part of the Justice for Heath group taking Hunt to court over the imposition, said:

This strong message from junior doctors tells the government you can’t get more for less, or patients will suffer. We have rejected the idea of stretching the same amount of doctors over 7-days. We believe this to be completely unsafe.

What happens now remains to be seen. However, on the 68th birthday of the NHS, it would appear that the Tories have another fight on their hands with the junior doctors.

Moreover, if the public response during the last period of industrial action was anything to go by, it shows that those who use the NHS day in, day out, know who to trust.

And it’s certainly not Jeremy Hunt and the Tories.