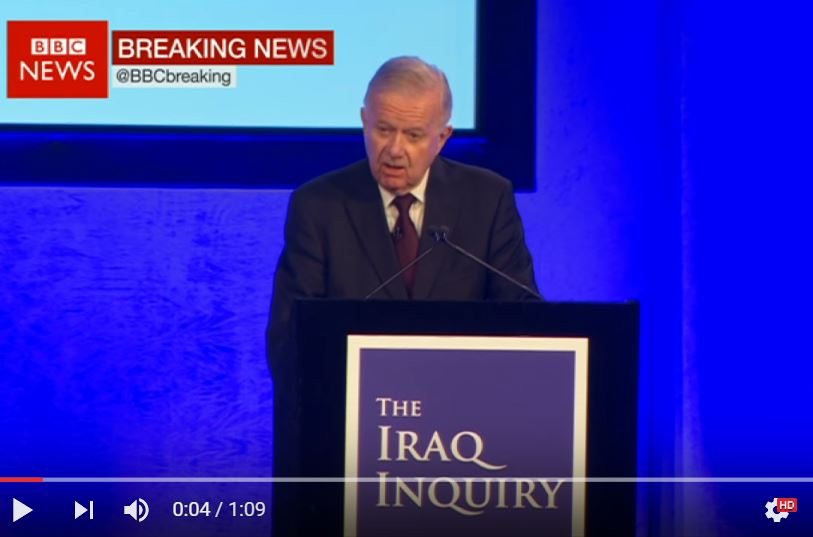 Sir John Chilcot has given his executive summary of the Iraq Inquiry report, after seven years of interviews and analysis. The report looked into Britain’s policies on Iraq from 2001-09, that informed the lengthy and much-criticised conflict. Chilcot’s entire half-hour statement was critical of the UK’s conduct in the decision to take military action, but Chilcot noted upfront that the inquiry was only to “consider the UK’s policy” and “identify lessons for the future”.

He rightly calls the UK’s military action an “occupation” and an “invasion”, words we usually identify with, at best, questionable conduct. But the question on everyone’s lips has been: was this an illegal war?

Though the inquiry has no legal foundation to engage legal proceedings, Chilcot addressed the question immediately, stating:

The Inquiry has not expressed a view on whether military action was legal. That could, of course, only be resolved by a properly constituted and internationally recognised Court. We have, however, concluded that the circumstances in which it was decided that there was a legal basis for UK military action were far from satisfactory.

The basis of this dissatisfaction had many sources, but the most clear and telling statement was also offered upfront:

[…] the UK chose to join the invasion of Iraq before the peaceful options for disarmament had been exhausted. Military action at that time was not a last resort.

Chilcot commented on Mr Blair’s actions throughout his statement, criticising them heavily and consistently. He noted that Blair and President Bush did not wait for the UN Security Council’s weapons inspectors to do their job because they didn’t believe they would “achieve the desired result”; that Saddam Hussein “could not have deployed WMD”; that Blair’s policies were based on “flawed intelligence and assessments” that were “not challenged, and they should have been”.

Of the many lessons to be learned, Chilcot noted “the management of relations with allies, especially the US” claiming that Blair “overestimated his ability to influence US decisions on Iraq.” He also pointed to the need to recognise the “importance of collective Ministerial discussion which encourages frank and informed debate and challenge.”

We have sought to set out the Government’s actions on Iraq fully and impartially. The evidence is there for all to see. It is an account of an intervention which went badly wrong, with consequences to this day.

You can read both Chilcot’s statement, and the report, in full. At 2.6 million words, it will be difficult for any civilian to find the time or energy to read the report, of course. But the media should hopefully reveal analysis of the findings.

The size of the Chilcot Iraq report pic.twitter.com/zVxKX3gaRi

However, it is important to remember that in addition to the cold facts of how we got here, there are the cold statistics of lives lost along the way, the side effects of the continuing, needless and ill-thought out conflict, and the damning indictments from Iraqi people on how life is now – because of British and US military action.

Read The Canary’s international articles, and articles about war.