Watch Corbyn destroy the Blairites over Iraq - in 2003 (VIDEO) - Canary 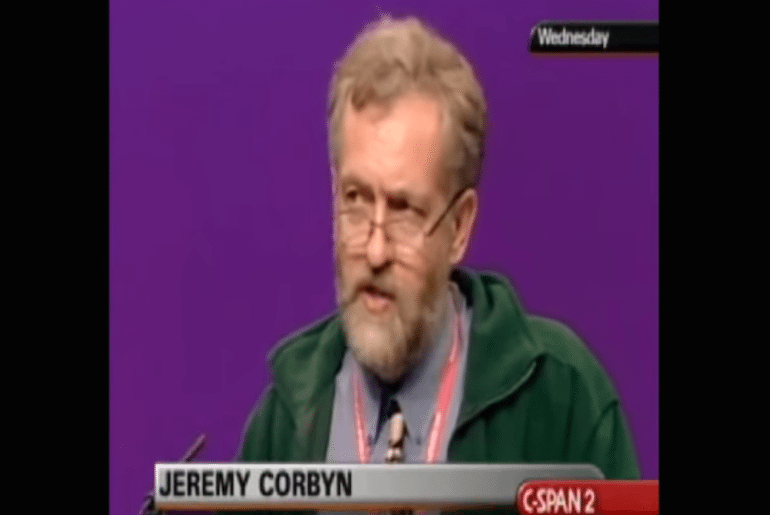 Back in 2003, while Tony Blair was dragging the UK into an illegal invasion of Iraq, one lesser-known backbench Labour MP was doing everything he could to oppose it: Jeremy Corbyn. And one of the speeches he gave back then reveals exactly why he’s the leader the Labour party so desperately needs right now if it’s ever to win back the voters it betrayed with the Iraq war.

On 26 February 2003, Corbyn voted to oppose the Iraq war, saying the case for military action was unproven. Three weeks later, when the government approved the invasion of Iraq on 18 March, he again rebelled. In the months that followed, Corbyn continued to oppose the war and work for a peaceful solution. And on 1 October, he delivered a powerful speech to fellow delegates at the Labour party conference, reminding them of the lies that had formed Blair’s case for war:

Last year, we were told that there would be no military action against Iraq without a specific second UN Resolution. There was no resolution. The anti-war campaign mobilised over a million people in Hyde Park on February 15th. We were told after that there were weapons of mass destruction – a real, present and credible threat from Iraq. MPs were told that and persuaded, in many cases very reluctantly, to vote on March 18th to go to war. We went to war.

The consequences of that vote were devastating, said Corbyn:

Maybe 10,000 Iraqis have died as a result of that war. Several hundred American and British soldiers have died. Iraqi children are dying from unexploded cluster bombs, and the effects of depleted uranium from the last gulf war and this gulf war are going to be there for generations to come.

Corbyn went on to expose the Bush administration’s real reasons for going to war, and to hold his party to account for supporting them:

The American-led administration is now… handing out contracts to Bechtel and Halliburton – all companies that supported George Bush’s election campaign… There is a handover of resources and a privatisation, and the payment of debts incurred by Saddam Hussein, in some cases to buy arms that were used to kill the Kurdish people and other people.

Are we going to be a party to subsidising the arms dealers that supplied Saddam Hussein, that killed his own people? I think we need to think very seriously about what we have done here and what we’re intending to do.

So where we go from here surely is to at least accept there has to be some international legality about what is going on in Iraq. There isn’t any. We’re an occupying force that’s allowing the privatisation of those resources. So what I’d ask is that we question the strategy of our foreign policy. Why are we, a British Labour government with a very large parliamentary majority [and] a marvellous tradition of internationalism, so signed up to the ultra-right-wing George Bush ‘Project for a New American Century‘ agenda?

Friends, this is not an issue that is going to go away. There are 150,000 foreign troops in Iraq. Putting more in to protect those that are there does not bring about safety or security. Setting a date for withdrawal and independent government in Iraq, and supporting that legally, is a way of bringing about peace and justice all around the world, not the chaos that is there at the present time.

The speech by Corbyn was met with applause by many delegates, but with dagger eyes from loyal Blairites Geoff Hoon and Jack Straw, then defence secretary and foreign secretary respectively. The very next day, the pair insisted that Labour’s invasion of Iraq was making that country and the world a better place.

It was far from the first rousing speech Corbyn had delivered on Iraq. In February, weeks before the vote, he had joined the million people marching against the war and told his fellow protesters:

Thousands more deaths in Iraq will not make things right, it will set off the spiral of conflict, of misery, of hate, of desperation, that will fuel the wars, the conflict, the terrorism, the depression, and the misery of future generations. This movement is giving that message to the British government: stop now or pay the political price.

Sadly, history has vindicated Jeremy Corbyn, and shown Blair, Straw and Hoon to be catastrophically in the wrong.

The invasion of Iraq caused extraordinary suffering to the people of Iraq, perhaps killing as many as 1 million people. As Mehdi Hasan points out in the New Statesman: “If bombing ‘worked’, Iraq would have morphed into a Scandinavia-style utopia long ago”. Instead, the country is in chaos – and Iraq now has more fatalities from terrorism than any other country in the world. Just days ago, more than 200 people were killed in a devastating bomb attack in Baghdad. Global terrorism has also skyrocketed since the Iraq invasion.

Jeremy Corbyn was also right that the British government would pay the political price for its participation in the invasion of Iraq. That price has not just been a course of devastating and costly Western interventions in the Middle East. Iraq also marked the Labour party as a party of war, and lost it swathes of voters.

The Chilcot report gives the Labour party an opportunity. If the party can show that it has learnt its lessons, and that it will hold those who misled the country to account, it has a chance of regaining the trust of the voters it betrayed with Iraq. And Jeremy Corbyn, with his anti-Iraq war credentials, is one of the few Labour politicians who can do this. In fact, this is exactly what he suggested he would do during his 2015 leadership campaign:

Some have speculated that the entire attempted ‘coup’  against Corbyn has been orchestrated to try to stop him from doing just that. As The Canary has previously reported, the SNP’s Alex Salmond has said:

I had a conversation on exactly this point with veteran Labour firebrand Dennis Skinner. He answered in one word ‘Iraq’. The Skinner line is that the coup was timed to avoid Corbyn calling for Blair’s head next Wednesday from the despatch box. Indeed many would say that when Corbyn stated that he would be prepared to see a former Labour Prime Minister tried for war crimes then he sealed his fate as leader of the Labour party.

But the plotters, said Sky’s Jon Craig, have been struggling to find a candidate who opposed the Iraq war:

Corbyn backers tell me plotters can't agree because can't find candidate who opposed Iraq war. Claim they need that with Chilcot next week.

The plotters are right. With the publication of Chilcot, Labour desperately needs a leader who opposed the Iraq war. But it already has one. And that leader has the overwhelming support of the party membership, the unions, and vast swathes of the public. But if he’s to win back the voters New Labour lost, he needs the parliamentary party to get behind him.