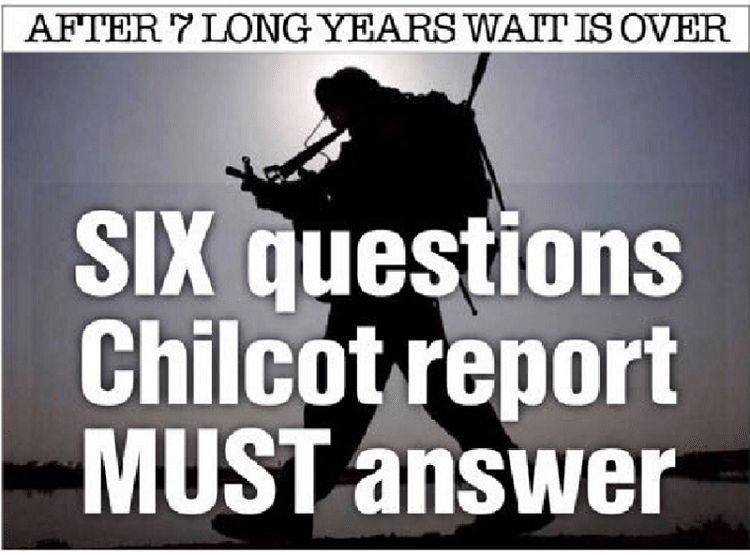 Although The Sun has never been known to admit its mistakes, a piece by its political editor on today’s publication of the Chilcot Inquiry shows its hypocrisy knows no bounds.

Commenting on the report into the 2003 Iraq war released on Wednesday, the paper’s political editor Trevor Kavanagh wrote a piece entitled “These are the SIX questions about the Iraq War that the Chilcot report MUST answer.”

Kavanagh, asserting that “the price in blood will be paid for decades”, ruminates that Chiclot needs to provide definitive answers to the following: 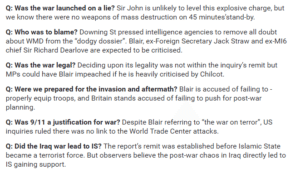 In his article, Kavanagh says that:

As The Sun’s Political Editor, I toured the world with Blair’s political circus as he drummed up support for this conflict. I attended the Parliamentary debates. I was in Saudi Arabia as Saddam blitzed us with Scud missiles.

Appearing to be thinking out loud over past misdemeanours, he goes on to say that:

Our charismatic British ­premier was at the peak of his ­persuasive powers. He certainly persuaded me.

This may be the closest that The Sun comes to admitting an error of judgement. As during the 2003 Iraq war itself, a war which claimed the lives of 179 British soldiers and left a death toll of Iraqi civilians which is estimated between 500,000 and one million, the paper happily trotted out the Labour government line. So much so that it appeared to relish in it.

This is the front page after the House of Commons voted for the invasion: 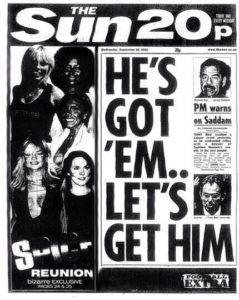 In Kavanagh’s piece from 2003, he openly supported the invasion of Iraq, with sub headers that included “”Brits 45 minutes from doom”. As Wilhelm Mirow asserts in his research paper “Strategic Culture, Securitisation and the Use of Force: Post-9/11 Security Practices of Liberal Democracies”:

While the paper swung its full support and all its rhetorical resources behind the Bush and Blair governments, it also scorned those within the UK and internationally who opposed these governments’ actions.

The Sun was unrelenting in its smearing of high profile politicians who spoke out against the war. It called the late Robin Cook MP a “quitter”, and had its 21 February 2003 edition translated into French and handed out free in Paris – with a headline describing the then President Chirac as a “worm”.

But then, not only was The Sun courting and pandering to whatever line the government wheeled out, it was also ensuring its readership were fed what they wanted to hear. At the time, a Gallup poll found that 61% supported an invasion if “the Iraqi regime did not cooperate with UN inspectors”.

Wednesday’s piece by Trevor Kavanagh is The Sun doing what it does best. Ignoring its past misdemeanours and merely trotting out whatever will garner favour with the public of the day.

Kavanagh asserts about Tony Blair that, in hindsight:

The conflict which was to have secured Tony Blair’s legacy as one of Britain’s greatest Prime Ministers has turned him into a mega-rich pariah with no hiding place in his own country.

Ironically, the very same could be said about The Sun’s owner Rupert Murdoch.

A mega-rich pariah who, by systematically allowing his paper to act without editorial line, recourse or even the faintest whiff of an apology – helped fuel public support for an ultimately disastrous, deadly and possibly illegal war. But a pariah that, far from having no “hiding place”, is still at the forefront of UK journalism, today.

The Sun. The unrelentingly hypocritical bastion of the “free” British press.