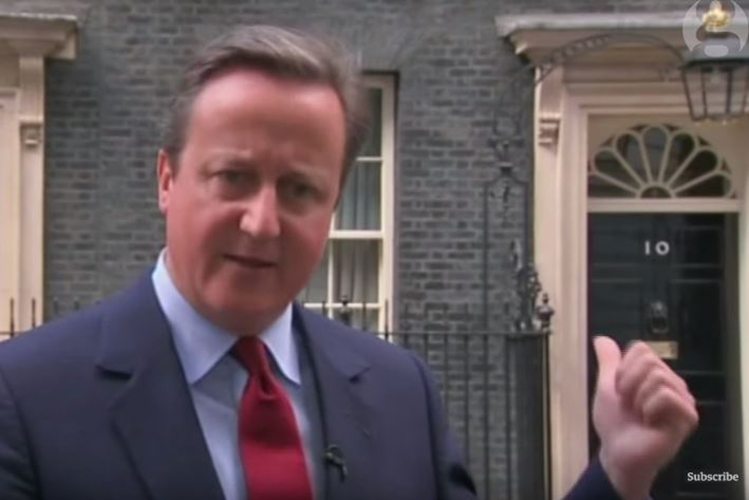 This afternoon David Cameron announced that, as the only remaining person in the Conservative leadership race, Theresa May would automatically become the next Prime Minister. Not only without election by the Tory membership or the public, but also far, far ahead of the September deadline he originally gave after Brexit. May will become PM in two days, on Wednesday.

Cameron made a statement outside Number 10 which, from the video evidence, appears to have been a relatively impromptu affair. There was no podium set up from which he could make the announcement, and the video is not standard broadcast quality. The BBC’s political correspondent Vicki Young had commented that events are moving “very rapidly”.

The Guardian reported that Cameron spoke positively about the bumping-forward of his resignation, and about May as his replacement:

He announced that she will take his place in Number 10 after Prime Minister’s Questions on Wednesday.

Shortly after the announcement, videos surfaced on Twitter that appear to show Cameron re-entering Number 10, humming an upbeat tune and stating “Right!” before the door closes behind him. Robert Peston, ITV’s Political Editor and former BBC Business Editor, called it a “Winnie-the-Pooh style hum”:

.@David_Cameron humming a Winnie-the-Pooh style hum as he says goodbye to the cares of office. pic.twitter.com/kcydnLZBg4

Peston also hints that Cameron seems quite happy to leave office, and to hand over so quickly to May. It certainly seems so from the demeanor he’s presenting.

However, it could be that he was purposefully displaying a carefree attitude – harking back to the speculation of last week, when Ken Clarke had made outspoken comments about his Conservative colleagues – including May – while miked and being recorded. It’s unlikely that political veterans would be so unguarded while miked-up and on camera.

However, due to the fact that events are moving so rapidly, it may be that in his haste Cameron truly did not consider that his cheerful tune would be heard around the world. Or that he’s in on it, trying to cheer up the public for his last hurrah. Or perhaps it’s simply that he, like the rest of us, is so frustrated with the chaos of British politics right now, that he’s genuinely glad to be shot of the responsibility. Who knows.