Nato's new agenda is frighteningly clear: prepare for war with Russia - The Canary 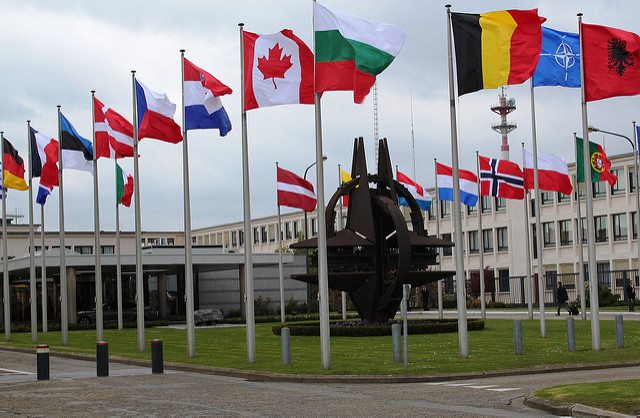 The 28 heads of the member states making up the North Atlantic Treaty Organisation (NATO) met in Warsaw, Poland last weekend. And rarely has a NATO gathering been such a huge muscle flexing exercise.

This year – the first time it’s been held in a central European state, and the final one with President Obama at its helm – the alliance made clear that there was a certain threat.

Many people’s expectations would have hoped to see all this gusto aimed at those responsible for atrocities in Syria and the increase in terror attacks from Islamic State (Isis). Instead, it was firmly aimed at an old foe, leaving behind its pact of cooperation from past decades and firing at it accusations of instability and insecurity.

The Summit’s main document, the Warsaw Communiqué, dedicated 22 paragraphs to Russia’s aggressions and the need to counter them:

Russia’s destabilising actions and policies include: the ongoing illegal and illegitimate annexation of Crimea, which we do not and will not recognise and which we call on Russia to reverse; the violation of sovereign borders by force; the deliberate destabilisation of eastern Ukraine; large-scale snap exercises contrary to the spirit of the Vienna Document, and provocative military activities near NATO borders, including in the Baltic and Black Sea regions and the Eastern Mediterranean.

[Their] irresponsible and aggressive nuclear rhetoric, military concept and underlying posture; and its repeated violations of NATO Allied airspace. In addition, Russia’s military intervention, significant military presence and support for the regime in Syria, and its use of its military presence in the Black Sea to project power into the Eastern Mediterranean have posed further risks and challenges for the security of Allies and others.

It further accuses Russia of breaking various agreements, which were aimed to build partnership and trust between the two power bases, including the 1997 Basic Document of the Euro-Atlantic Partnership Council, the 1997 NATO-Russia Founding Act, and 2002 Rome Declaration. Nato also highlights its own apparent compliance with the founding agreement declaring that:

Decisions we have taken, including here at our Summit, are fully consistent with our international commitments, and therefore cannot be regarded by anyone as contradicting the NATO-Russia Founding Act.

However, it seems not everyone agrees.

Since the 2014 Wales Summit, there’s been emphasis on increased defence spending, but in particular a need to enhance capabilities in the east. This was further compounded at the Summit this year: Canada, Germany, the United Kingdom and the United States committed to establishing a military presence in Latvia, Lithuania, Estonia and Poland.

Military spending on this “European Reassurance Initiative” will quadruple from $789 million in 2016 to $3.4 billion in 2017.

The problem is that according to the 1997 Act, NATO agreed not to establish a permanent deployment of troops east of Germany.

Now NATO is rebuking its own commitment, head on. It claims that this expansive military encirclement of Russia by NATO forces is simply an ongoing rotation of temporary deployments, for instance – an underhand way to avoid being defined as a ‘permanent’ presence.

Russia, through its state sponsored media channels, have called NATO out on this, saying they have breached the 1997 Act, and arguing that the main outcome of the Warsaw Summit was plainly to increase NATO’s military presence near its borders. They even quote former USSR President, Mikhail Gorbachev, stating:

They talk about defense, but actually they are preparing for an offensive.

Preparations for a new war with Russia are reflected in Nato’s Anakonda 2016 war game, a massive military exercise involving some 31,000 troops and thousands of combat vehicles, and the BALTOPS 16 naval exercise in the Baltic Sea. Both exercises simulate a major conventional war with Russia.

Unsurprisingly, Russia’s response has been to endorse an expansion of its own.

Meanwhile, The Guardian views the Summit as an entirely appropriate response to multiple threats posed to NATO.

Appropriate or otherwise, the message to Russia is clear: NATO is ready for you.