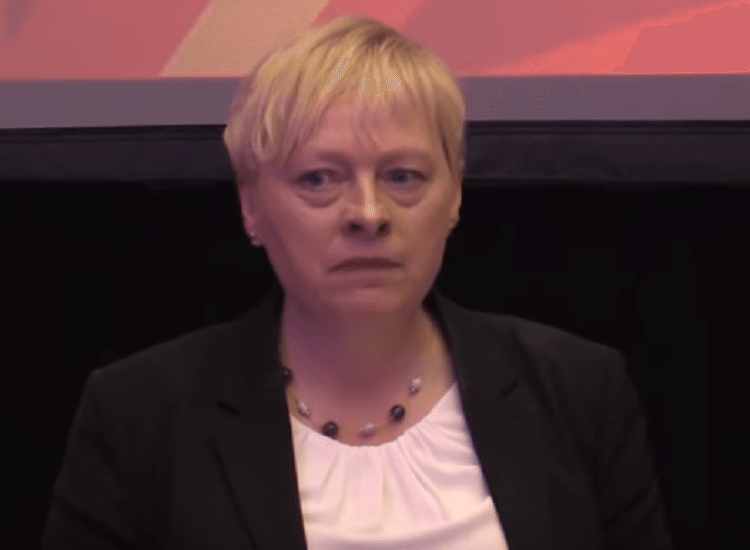 Angela Eagle stepped down from the Labour leadership election on Tuesday – leaving it, for the moment, a two horse race between Jeremy Corbyn and Owen Smith.

Eagle, who has been the MP for Wallasey since 1992, officially announced her departure from the contest at around 5.30pm, saying:

I congratulate Owen and look forward to seeing him taking on Jeremy Corbyn.

She attracted 72 nominations from MPs and MEPs, 18 below rival Owen Smith’s 90. Smith was accused on Monday of making a “homophobic slur” against Eagle, when he commented that he was a “normal” candidate with a wife and children.

Eagle’s campaign has been marred by controversy, amid accusations of dirty tricks and manipulating the truth.

As The Canary previously reported, accusations of homophobic abuse being thrown at Eagle during a meeting of her CLP Wallasey branch appeared false.

Tessa Jowell, the former Labour MP, claimed that in a meeting of Eagle’s constituency Labour party (CLP) the latter:

However, the chair of Wallasey CLP said that Eagle wasn’t even present at the meeting in question, and denied that any such abuse took place. Considering her daughter got married the next day to her longtime (female) partner, it’s probable that the Wallasey CLP chair’s word is better than Jowell’s.

Then came the story of the question and answer session that the hotel venue had cancelled, because they were receiving threats. Except they weren’t.

A spokesperson for Eagle told the media at the time that:

A members’ meet-and-greet and Q&A in Luton today with local MP Gavin Shuker had to be relocated after the venue, a hotel, apparently received threats. Police were informed and have offered protection for the event. Angela is continuing with the visit as planned.

However, the hotel seemingly weren’t aware of any such threats, as they issued a statement saying:

We can confirm that the event has been cancelled as we were unaware of the nature of the meeting.

There was also the tale of the broken window in her constituency office.

Following the incident, Eagle said (in reference to Jeremy Corbyn):

However, all was not as it seems, as this video alludes to:

As The Canary reported on Monday:

Eagle and her cohorts in the media are quick to accuse others of knee-jerk conspiracy theories, even when presented with rigorously pursued evidence trails. However, they apply entirely different standards of evidence to any passing piece of gossip or rumour that suits their cause. A window is smashed, Corbyn supporters did it. No evidence required, no investigation conducted. It is shared as fact, because it supports the political ‘othering’ of those outside the Labour coup worldview.

The frustrating thing about Eagle’s, and her team’s, seeming willingness to exploit innocuous situations for political leverage, is that they detract from serious events when they do occur. After Eagle shockingly received an alleged death threat via email, police arrested a 44-year old man from Paisley, Renfrewshire.

But Eagle has also struggled politically during the course of her campaign.

From having her very own Groundhog Day, where she seemed to announce nearly every 24 hours that she would be standing in the leadership contest, then didn’t – she always appeared from the outset not wholly comfortable with the position.

Awkward interviews with the likes of Andrew Neil on the BBC’s Sunday Politics programme, press briefings which ran like a scene from The Office, and social media campaigns which were PR disasters – Eagle has done herself no favours.

She now, however, finds herself in a somewhat precarious position.

Having been one of the initial parties in the “coup” against Corbyn, she undoubtedly will have lost favour with his team. And with the latest polling [paywall] showing Corbyn’s support amongst Labour members going up by 4 points to 55%, he is on course to win the leadership race. Meaning, for the time being, any front bench position for her is probably out of the question.

She also faced a vote from her constituency Labour party (CLP) which passed in full support of Corbyn – indicating her local grassroots have little faith in her.

Where next for the Wallasey MP is anyone’s guess. But, for the time being, Eagle will be returning quietly to the backbenches.

For some, this cannot come quick enough.

If you wish to become a registered supporter of Labour, and vote in the leadership elections, join here.