The UK Prime Minister is very excited about Pokemon Go, but not for the same reason you are - Canary 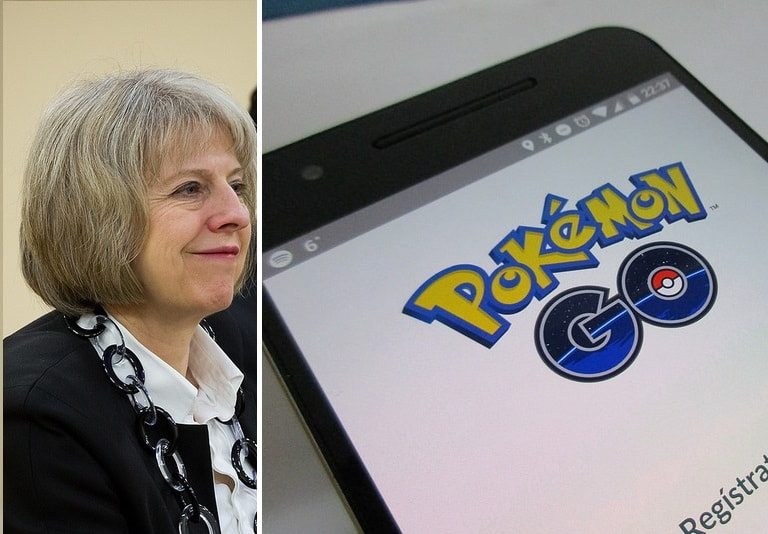 Britain’s new Prime Minister, Theresa May, is likely to be very excited about Pokemon Go. But not because she wants to train a Charmander, battle friends or scour the earth for legendary Pokemon.

No, as mother of the notorious ‘Snoopers Charter’, May will be over the moon with the new surveillance powers hidden in the privacy policy for Pokemon Go. Currently undergoing legislative scrutiny, May’s charter (officially known as the Investigatory Powers Bill) will make the bulk collection of all our personal data totally legal.

Niantic, the company behind Pokemon Go, has the following privacy policy for its users (including those under 13 whose parents have allowed them to play):

We may disclose any information about you (or your authorized child) that is in our possession or control to government or law enforcement officials or private parties as we, in our sole discretion, believe necessary or appropriate: (a) to respond to claims, legal process (including subpoenas); (b) to protect our property, rights, and safety and the property, rights, and safety of a third party or the public in general; and (c) to identify and stop any activity that we consider illegal, unethical, or legally actionable activity

So what information could May’s government, or “private parties”,  now have access to? Security engineer Jason Strange has flagged the long list of app permissions:

Considering Niantic is free to disclose any user information “to government or law enforcement officials or private parties”, the two permissions that are most concerning are the camera access and location tracking. Access to the camera and microphone allows Pokemon Go to perform audio fingerprinting. Meanwhile, the game has precise location tracking.

you have an app that could easily be subpoenaed to track down/snoop on a person of interest.

Once you delve into who the government considers a ‘person of interest’, the combination of extensive app permissions and loose privacy policy becomes sinister. The government is currently using its ‘domestic extremism’ police unit to spy on the Green party, environmental activists and children. So it would be naive to think that the government does not have its own motives for collecting our data and wouldn’t use Pokemon Go to further them.

Our Services do not have the capability to respond to “Do Not Track” signals received from various web browsers.

So, Pokemon Go enables governments, and “private parties”, to have access to huge swathes of our personal data, at the “sole discretion” of the company. The game has become so popular in the US that it has topped Twitter’s daily users, seen more engagement than Facebook, and has been installed as an app on Android smartphones more times than the dating app Tinder.

Considering the arbitrary application of state apparatus, such as the ‘domestic extremism’ police unit, this new set of keys to our personal data is very exciting for an authoritarian Prime Minister like Theresa May.

But for the rest of us, it’s quite disturbing.

READ MORE: Pokemon Go has surprising effects on the mind.