Labour legend Dennis Skinner has a message for anti-Corbyn MPs, and they won't like it one bit [VIDEO] - The Canary 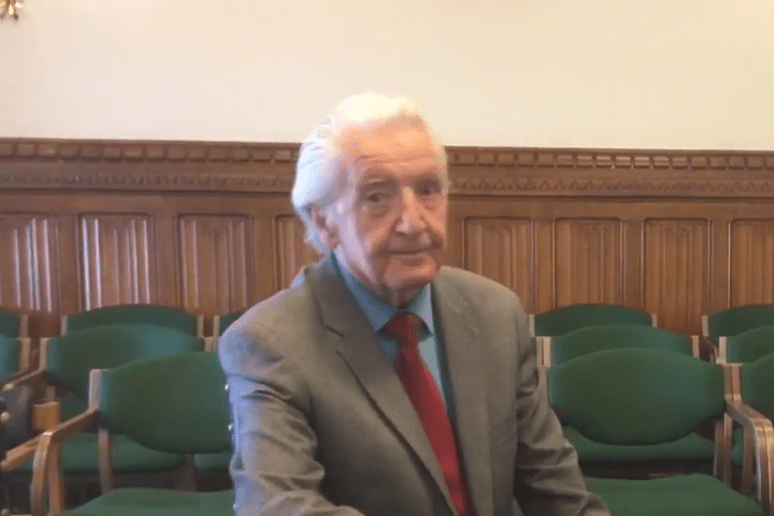 In an interview with Richard Burgon MP, Dennis Skinner dropped a message for the Labour coup:

This is a chance to give him a bigger vote than he had last time.

The Labour plotters will not like this one bit, as Skinner has suggested the coup has only increased Jeremy Corbyn’s support. Accordingly, party membership is set to hit 600,000 after a huge boost following the coup’s inception. Momentum, the grassroots campaign group for Corbyn, has reported its membership has doubled to over 12,000 since the coup began, coupled with record-breaking daily donations of £11,000.

And it’s not just Corbyn’s grassroots base that looks very strong. Rejecting the no-confidence vote, over 240 Labour councillors have signed a letter maintaining their support for Corbyn. In a further indication of his robust local support, a Newsnight survey of 50 constituency Labour party (CLP) chairs found that 90% of them still back Corbyn. The leaders of the 12 strongest unions in the United Kingdom also wrote a letter of support following the attempted coup.

While Labour’s ruling national executive (NEC) has banned new members from voting, and raised the fee to vote as a ‘registered supporter’ from £3 to £25, it does not look like this will prove Skinner wrong. Within the window of a mere 48 hours, over 183,000 people signed up to vote in the contest.

I doubt whether, in whole of British history, any political party has recruited 183,000 paid supporters in just 48 hours. Astounding fact

Speaking at the interview, the MP for Bolsover expressed why he thinks Corbyn is electable:

He is the candidate that most likely mirrors the Labour vote. That’s his strength. Plus the fact that he’s been able to demonstrate, over the course of the past seven months, that he carries out the promises he made. Now a lot of MPs are not able to do that. But Jeremy’s proven to them that he means business.

And it’s not just the past seven months that show Corbyn’s conviction. The Labour leader was so dedicated to opposing the apartheid regime in South Africa that he got arrested for protesting. And it’s not just racism Corbyn has consistently stood against, he has fought for LGBTQ+ rights since he entered parliament when doing so was far from mainstream and considered ‘loony’ by many.

And it’s exactly this consistency that resonates with his supporters – it emanates honesty.

One could argue that leadership challenger Owen Smith is one of those MPs Skinner speaks of, who cannot command such trust. Although Smith insists he is a politician of “conviction”, there are many instances where he has appeared to have U-turned or made contradictory statements.

Resigning when the country needs security

Everyone has their favourite Owen Smith U-Turn…… This is mine… What's yours? pic.twitter.com/IXnj0PVmc8

After condemning Cameron for resigning after Brexit, Smith did exactly the same in an attempt to topple Corbyn. Just when the country needed a strong and united opposition, Smith and his fellow plotters decided to launch a coup against their democratically elected leader through a carefully coordinated series of resignations, public statements and PR stunts.

Joining the CND and then voting for Trident renewal

Smith has cited his former membership of the Campaign for Nuclear Disarmament (CND) in order to appeal to Corbyn supporters. Yet, he has repeatedly voted for Trident renewal – saying he is for “multilateral disarmament”. But considering only nine out of 196 nations have nuclear weapons, the argument that ditching Trident constitutes “unilateral” disarmament does not hold up. We would be joining the majority of the world in not having nuclear weapons, not vice-versa.

Smith said he would be prepared to use weapons of mass destruction, even though the decision of whether to use Trident ultimately lies with the US – the nukes are paid for by us, but controlled by Uncle Sam.

Smith has positioned himself as an anti-austerity candidate. However, he has not been consistent on this – only last year he abstained on the 2015 welfare bill, which allowed the Tories to make a further £12bn of ideological cuts to public services. Back in 2013, he also said that Labour cannot commit to reversing spending cuts, claiming they had to be ‘realistic’.

And on Sunday, the leadership hopeful told Andrew Marr:

Since throwing his hat in for the leadership, Smith has said that he is committed to a fully public NHS.

But he supported Tony Blair’s outsourcing of minor operations to private providers. Smith also previously worked as a chief lobbyist for the UK’s biggest biotech firm Amgen. And before that, he worked as a lobbyist for the pharmaceutical giant Pfizer and argued patients should have greater “choice” in the NHS. In an interview, he also said private involvement in the NHS is “fine”:

Considering how often Smith has flip-flopped, it may prove difficult for him to convince Labour voters that he is engaged in a genuine campaign. Many will also raise eyebrows at his judgement after he referred to Blair as a “democratic socialist” back in 2006.

Speaking to Richard Burgon MP, Skinner not only infuriated the coup by suggesting Corbyn will only increase his mandate, he also nailed exactly why the Labour leader has so much support – consistency and conviction.