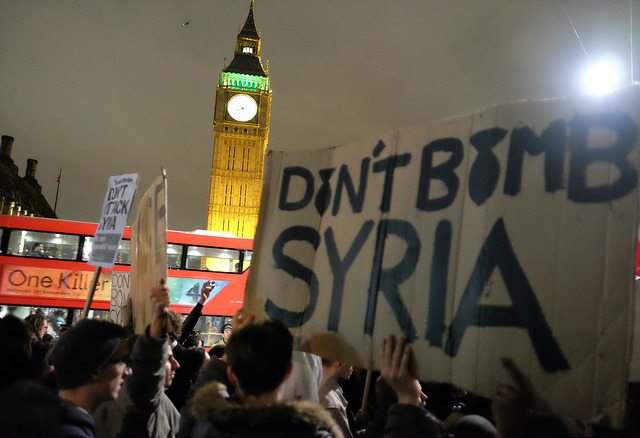 After dozens of civilians were killed by a US airstrike in Syria, a “Pray for…” hashtag was started to show solidarity with ordinary people whose lives have been ruined by over five-years of war. And one video in particular encapsulated the message many people felt needed voicing.

“The Most Shocking Second A Day” was a campaign launched in 2014 by Save the Children, a charity which provides aid in the UK, and to war torn countries. In the video a young British girl is depicted celebrating her ninth birthday. But as the film progresses, it portrays what life would be like for her if the UK was in the midst of an ongoing war, like Syria is. Showing the UK descending into conflict, it acts as a stark reminder of the cosseted lives we all too quickly take for granted in Britain.

But the film, which essentially asks the viewer to “put yourself in their shoes”, poses a deeper question about western governments foreign policies.

This latest “accident” by western forces is estimated to have killed between 56 and over 100 innocent people, according to varying reports. It occurred in the village of Tokhar, near Manbij which is an Islamic State (ISIS) stronghold. The US are thought to have mistaken the men, women and children for ISIS fighters, as they were trying to flee the village in the early hours of Tuesday morning.

However, this is not some random incident. There are countless examples of foreign interventions taking the lives of innocent people in countries that have effectively been invaded, even though the west and Russia have the most advanced military equipment on the planet.

As The Nation reported in 2013, at least eight wedding parties since 2001 have been attacked by US drones, killing the majority of the people there. As Tom Engelhardt wrote:

reports on a wedding slaughter in a distant land are generally relegated to the inside pages of the paper and passing notice on the TV news, an event instantly trumped by almost anything whatsoever—a shooting in a school anywhere in the US, snow storms across the Northeast, you name it—and promptly buried and forgotten […] If the Taliban or the Iranians or the North Koreans had piled up such figures […] we would know just what to think of them. We would classify them as barbarians, savages, evildoers.

However, it’s not just wedding parties that are subject to military “errors”. Hospitals run by Médecins Sans Frontières (MSF) have been repeatedly targeted by both western and Russian airstrikes, even though the organisation always gives details of the precise coordinates of its operations.

This happened in Kunduz, Afghanistan on the 3 October 2015, where 42 people were killed by a US airstrike. It happened again on 27 April in Aleppo, Syria, where Russian forces bombed another MSF hospital, killing 14. But neither of these were freak occurrences, either. In 2015 a total of 63 MSF-supported hospitals and clinics were bombed or shelled on 94 separate occasions; 12 of these facilities were completely destroyed.

The west and Russia are very quick to apportion the blame when terrorist attacks, such as the horrific massacre in Nice, France on the 14 July which killed 84 people, happen. The generic response is to blame a perverted, fundamentalist version of Islam; that the perpetrators had been “radicalised”, and that “we” must step-up our efforts to combat ISIS.

What we never hear from western and Russian governments is any semblance of self-reflection on our foreign policies. Policies which have, in part, caused the refugee crisis that engulfed Europe last year and this. That have partly caused more than 1m people to flee Syria, because a life-or-death voyage in a rubber dinghy across an expanse of ocean is more favourable than staying at home. Even though nearly 4,000 people perished making the same voyage in 2015.

However, when it comes to foreign policy, big money and big corporations speak louder than the voices of those civilians caught up in the devastation. But questions must surely be asked as to whether policies that cause the killing of innocent men, women and children are actually inflaming the anger of people – and whether the increase in terrorism we see on western shores is, in part, a consequence of this.

Our politicians may do well to watch the Save the Children videos, and “put themselves in their shoes” for a few minutes. They may then be less hasty with their unquenchable thirst for bombing.

In a follow-up film, the life of the young girl is depicted as a refugee, and makes for equally moving viewing:

Donate to Save the Children.

Sign the Scottish National Party’s petition against airstrikes in Syria.