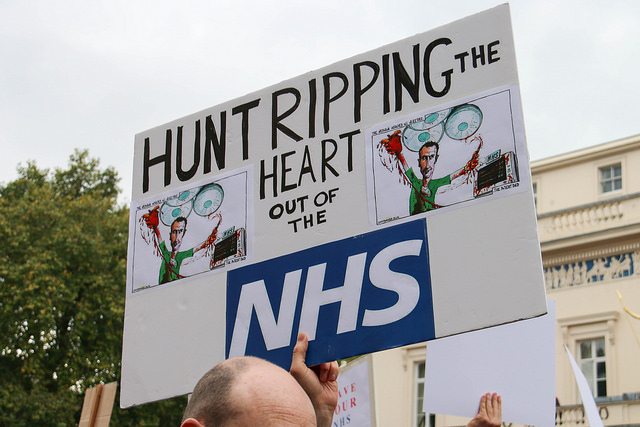 Conservative Health Secretary Jeremy Hunt will be back in court on Thursday, over the ongoing debacle of the junior doctors contract – and it’s the doctors themselves who are mounting a legal challenge against him.

“Justice for Health” (JfH), a group of five junior doctors, have crowdfunded the costs of a legal campaign in an attempt to stop the imposition of the controversial new contract. Today’s hearing in the High Court will run through the details of the case, and set a date for a judicial review.

In what’s been a protracted industrial dispute, seeing the profession’s first full strike in history, Hunt’s position has remained resolutely entrenched; that is, he asserts that he has the right to force the new terms and conditions upon the junior doctors, and is intending to do so – with effect from this October.

The basic arguments against the contract are clear. That junior doctors already work shifts which cover 24 hours a day, seven days a week; that the contract itself is discriminatory against women; that the evidence stating mortality rates are higher at the weekends is flawed; and that patient care, in the event of the contract being imposed, will worsen – as existing staff will be stretched even further than they already are.

In July junior doctors, via the British Medical Association (BMA), rejected the contract in a referendum –  with 58% voting against the deal while 42% voted in favour. Nearly 68% of those eligible turned out to vote – around 37,000 junior doctors and medical students.

Unfortunately because of the vote we are now left in a no-man’s land that, if it continues, can only damage the NHS. I have […] decided that the only realistic way to end this impasse is to proceed with the phased introduction of the exact contract that was negotiated, agreed and supported by the BMA leadership. The contract will be introduced from October this year.

What the JfH team are accusing Hunt of is overreaching his mandate as secretary of state for the Department of Health (DoH).

They say that under his remit Jeremy Hunt does not have the legal power to force the contract upon the junior doctors via their employers, such as NHS Trusts or GP groups. He can only be involved with negotiations, approve the terms of the contract and take steps to lead to its introduction.

A letter (pdf) sent to the DoH’s legal team makes it explicitly clear just what the problem is. Mr Hunt has repeatedly stated that he will either ‘impose’ or ‘introduce’ the contract – but has then denied that he has ever done so.

The most telling instance was at a speech to the King’s Fund in July last year. In reference to negotiations with the BMA stalling, Mr Hunt said:

But be in no doubt: if we can’t negotiate, we are ready to impose a new contract.

The Justice for Health group’s solicitors also highlight nine other occasions where the Health Secretary or his legal representatives have explicitly said that he has the legal power to do the disputed actions surrounding the contract. But it goes further.

It also highlights a letter from the DoH legal team:

We understand from your letter of 15 April 2016 that the Secretary of State is (in that letter at least) asserting that he was not “imposing the junior doctors’ contract” but merely taking a lead role in negotiations and discussions between NHS Employers and the BMA. Further, that the Secretary of State is entitled to approve the terms of model national contracts for among others junior doctors and “to take steps leading to the introduction of model national contracts by the various employers…”

This is the crux of the matter. In a legal document, the health secretary (via his legal representatives) has stated that he is not imposing the contract, but merely taking steps to assist in the process of its introduction and negotiations surrounding it.

This flies in the face of everything he has stated on the record via parliament and the government – and this is crucial.

As Dr Ben White said in a press statement:

NHS staff are not the barrier to better care, they never have been. Jeremy Hunt has purported to be a decision maker for the NHS and has reinforced a harmful line of dispute with junior doctors over the last nine months. We have legal arguments to contest imposition and unilateral introduction. It is time to hear this case, and move forward with honest and open debate about staffing and funding our future NHS.

With Theresa May keeping Hunt in his health role in her new cabinet, it would appear that she supports his belligerent, obtuse attitude towards the junior doctors and the NHS more broadly. However, with the JfH’s legal case now going to a full judicial hearing, May and Hunt could well be in for a showdown of epic proportions.

Support the Justice for Health team in their legal action against Jeremy Hunt.

Sign the petition to stop the junior doctors contract.

Keep up-to-date with campaigns and protest to save the NHS.