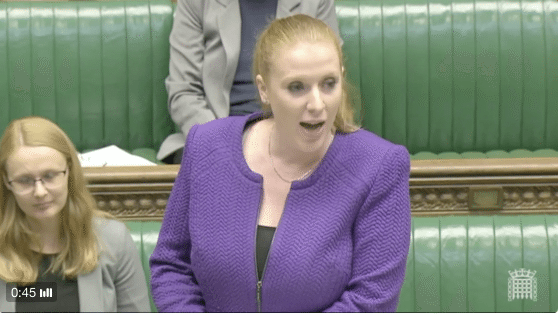 It’s been a while since the Labour party had a front bench willing to hold the UKs media and corporate community on trial in the House of Commons. But it appears that times have changed.

Labour MP and new shadow secretary of state for education, women and equalities – Angela Rayner – has demanded a full apology from The Sun for its attack on Channel 4 journalist Fatima Manji. As The Canary’s Steve Topple wrote on Wednesday:

McKenzie was accused of inciting racial hatred after a column denounced the fact the Manji was wearing a hijab while presenting a news piece on the massacre in Nice, France. Over 1,400 complaints have been made to the press regulator.

Again, the Sun tweeted a shameless headline, but on this occasion they deleted it:

Labour MP Angela Rayner was not willing to let the incident pass without comment in the House of Commons, or to let The Sun get away with simply deleting their tweet and moving on.

She told the House:

Like many across the country I was dismayed and upset by Sun columnist Kelvin McKenzie’s disgraceful islamophobic attack on the Channel 4 news presenter Fatima Manji.

She then called for her Conservative counterpart to demand a full public apology from both McKenzie and The Sun, and to seek ways to improve standards in the treatment of ethnic minority communities by the British press.

The wave of hostility in the commercial news media today toward ethnic minorities is real. Their continued abuse of women is real too – including victims of rape and sexual assault. As is their hostility to those who hold a political viewpoint outside the narrow confines permitted by them and their counterparts in the political class. And it’s reaching fever pitch.

It is not enough to accept that others simply have a different world view, and disagree with those views respectfully. Rather, the establishment continues to pursue a rabid smear campaign against any individual or organisation which dares to retain an independent voice.

As a recent study by the London School of Economics showed, the media war against Jeremy Corbyn – and those who back him – is also very real. It’s not just Corbyn. The media continues to ignore the achievements and activities of the Green party, and Plaid Cymru in Wales, and slander the SNP in Scotland. They continue to act as a gatekeeper of our intellectual commons, policing public opinion into a kettle of accepted views.

But thankfully, there is a vibrant and abundant new media which is making it possible for other voices and viewpoints to be heard. So our recommendation to anyone who wants to find out what’s really happening in our country, and our world, is to get their news there.