Sex workers in Belfast are being treated like witches at the stake, and nobody is saying a word [VIDEO] - Canary 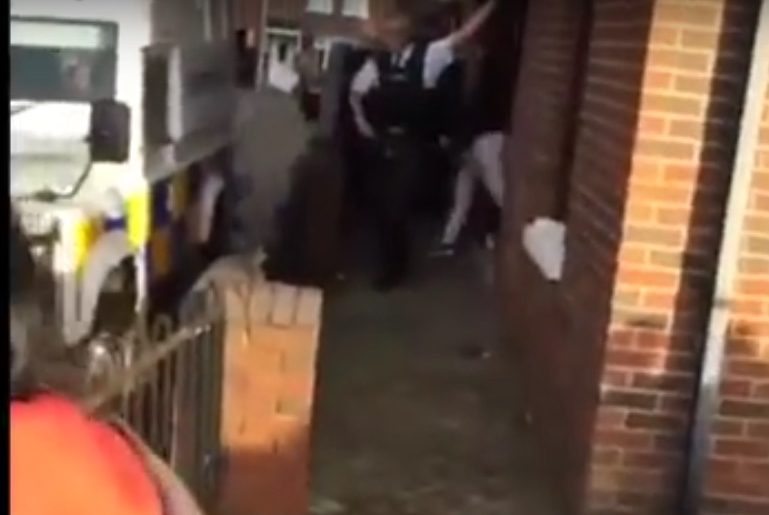 The video, shared on YouTube on 30 July by the sex worker safety group Safe IQ, shows officers leading women out of a house and into a police van. The footage is shot from within a group of people who had gathered to watch the arrests take place – among them men, women and children.

Cries of “dirty fucking whores” and “you should have put them on fucking fire” can clearly be heard from within the crowd, who cheer when the women are ushered into the van.

For Lucy Smyth, director of Safe IQ, which works on sex worker safety, the incident is nothing short of a hate crime. She told The Canary:

The Police Service of Northern Ireland (PSNI) take hate crime very seriously – you’ll see them constantly tweeting about it – and I know they put a lot of resources into tackling it. I think the PSNI recognising sex worker-targeted hate crime alongside all the other types of hate crime they already recognise would be beneficial to sex workers here.

Smyth explained that this is not the first raid of its kind, and that over the last few days more sex workers in Belfast have come forward with experiences of this type of abuse. She heard from one worker who told her that, after local residents discovered she was working from the house, they formed a mob of around fifty people and attempted to challenge her in the street. She was, understandably, left shaken and scared.

The purchase of sex is criminalised in Northern Ireland under legislation known as the ‘sex buyer law’ or the ‘Nordic’ model, so-called because it was first implemented in Sweden. It is intended to decriminalise those providing sexual services while criminalising their clients and managers. Brothel-keeping was an offence before the passing of the Human Trafficking and Exploitation Act in 2015, and remains so.

Workers are meant to be decriminalised under the policy, so the fact that the women in Belfast were being loaded into a police van should raise questions. Sadly, the answers to those questions may already have been obtained in 2013, when police raided brothels in the Soho area of London.

Paying for sex is currently legal in England, Scotland and Wales – though there is a groundswell of support to implement the Nordic Model across the rest of the UK – but brothel-keeping, along with soliciting, kerb-crawling and pimping, are not. During the Soho brothel raids, police kicked down the doors of several suspected brothels, forced the women in them onto the street, and then had the press photograph them while they desperately tried to conceal their identities.

Not content with humiliating the women and leaving many without jobs and homes, the police also sent any migrant workers to be detained and removed from the UK.

What will happen to the women in the video from Belfast is unclear. We may never find out. If they were operating without a manager, though, there is every chance that they could be prosecuted for running a brothel themselves – even if all they were doing was working in the same building for safety.

It is the finer points of the reality of working in a country where half of the sex work transaction is criminalised that are all too easily forgotten. That working with friends is forbidden. That a brothel raid might result in you losing your income and house.

It is these sorts of concerns that have always been expressed by sex workers and sex worker-led groups who oppose sex buyer laws. A survey commissioned by the Department of Justice in Northern Ireland reported just 2% of those working in the local sex industry who responded were in favour of the Nordic model.

Sex worker Laura Lee, who says she conducts about 50% of her business in Northern Ireland, launched a legal challenge against the government in response to its passing of the law and believes working has become markedly less safe. She explained:

People are not willing to use online booking forms, not willing to divulge their details. Everyone suddenly became ‘John’. There hasn’t been a reduction in demand, but it is far more difficult to keep myself safe.

Her point about a reduction in demand appears to be backed up by that same Department of Justice survey, which found only 16% of those who used the services of sex workers felt the law would make them stop seeking to pay for sex.

From one limited choice to another

Of course, if sex workers are not able to get traceable details from their clients before they meet with them, it follows that they will be less secure in taking the booking. But while the idea of criminalisation of clients is to ‘end demand’, these workers don’t have much choice if they want to pay their rent. Kate McGrew from the Sex Workers’ Alliance Ireland said of the situation at the time of passing:

There will just be more pressured situations and shadier environments, and workers will have less power to negotiate safe sex.

If your choice is to take a risky booking or lose income, it stops being much of a choice at all. Legislation designed to make sex workers safer, like the Nordic model, is supposed to be a response to the belief that sex workers do not really choose to enter the profession in the first place. But if current sex workers in Nordic model countries are to be believed, it simply replaces it with a different limited choice.

A report by Amnesty International into the implications of the Nordic model in Norway, published earlier in 2016, appeared to demonstrate that. Entitled ‘The Human Cost of Crushing the Market’ and referencing the intention to end demand for the sex trade, the report said:

Unfortunately, if sex workers are still interacting with their clients, who have now become criminals under the law, the police are going to have a direct interest in their lives and their business. They may conduct surveillance, and that may involve filming without consent – or, as this case in Oklahoma shows, other people might spy on them.

The debate as to whether sex work should be criminalised or decriminalised is a long, drawn out one featuring anger on both sides, as The Canary has outlined in the past. Sex worker-led groups like the Sex Worker Open University (SWOU) and English Collective of Prostitutes (ECP) campaign tirelessly for decriminalisation, following the belief that only under a decriminalised system will sex workers be able to navigate employment with increased rights and without fear of the police tracking them and, as seen in Belfast, arresting them. This model has backing from Amnesty International, UNAIDS, and the World Health Organization, among others.

Those who support criminalisation models like the Nordic or End Demand model, meanwhile, believe that decriminalisation only enables men who exploit women to do so freely. The rationale behind this belief has been laid out clearly in the Republic of Ireland, where Justice Minister Frances Fitzgerald refused on 2 August to decriminalise brothel-keeping for fear of managers using that legality to further exploit workers. As already described, sex workers find working together increases safety. But Fitzgerald does not consider that this benefit outweighs the harm that might be caused. This model has support from women’s organisations including Equality Now, and journalists including Julie Bindel.

Whichever side of the debate a person is on, many will agree that the verbal abuse and humiliation these Belfast women were subjected to was unacceptable. Sadly, those people who gathered to watch them being thrown out of the house – apparently seeing it as a family day out – will undoubtedly be of the opinion that sex work is wrong, that sex workers are wrong, and that it should be criminalised. Clearly, they have no concern for the women’s welfare at all.

Those who back criminalisation laws such as those implemented in Northern Ireland do not necessarily share the sentiments of the braying mob. But it’s hard to view the incident on camera as distinct from the impact of a law that inherently suggests the act of selling sex is wrong. Even if it is not directly criminalised, placing criminalisation on a range of other related elements, including purchase, suggests that those who engage in it are culpable.

To learn more about sex work, read Amnesty International’s work on the issue.

To support sex workers, donate and promote organisations like SWOU and ECP.

Get in touch with your MP to find out their views on sex work laws, and let your feelings either way be known.